Home Things To Do Smarty Movie Review: What you missed while you were raising your kids, Part II
Things To Do

We are continuing our series on movies that you may have missed while your focus has been on surviving those first years of motherhood. This week, let’s take a look at some classic chick flicks and romantic comedies.

It used to be that romantic comedies were released all the time. These days you are lucky to find one good one a year. Want to know why? Streaming services have caused DVD sales to drop dramatically. To find new revenue, movie companies have increased their reliance on foreign markets like never before. So what translates best in other countries and other languages? Superhero movies, action flicks and franchise films based on familiar concepts (like Transformers and Ninja Turtles). What doesn’t translate well to other countries? You guessed it—romantic comedies and love stories. So since they are becoming a dying breed, let’s take a look back at some gems that you may have missed: 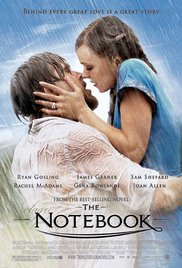 The Notebook (2004, Rated PG-13)
What’s the recipe for a great film? Take a terrific story with interesting characters, add two fantastic actors, sprinkle in some Charleston SC magic and you have created something incredibly delicious. Beautifully filmed by director Nick Cassavetes (the son of co-star Gena Rowlands), the story follows poor country boy Noah (Ryan Gosling) who falls for wealthy city girl Allie (Rachel McAdams). As their love blooms, their difference in social status is too much for Allie’s mom (Joan Allen) and she works to keep them apart. Gosling is mesmerizing as Noah and McAdams is perfectly cast as feisty, stubborn, spoiled Allie. The fact that these two became a couple after filming is no surprise as their chemistry is fantastic. While they sadly didn’t last together in real life, they will forever be linked together in my mind in this perfect southern tale. 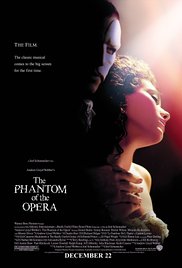 Phantom of the Opera (2004, Rated PG-13)
In case you’re wondering where my love for Gerard Butler began—it all started with Phantom of the Opera. You may have seen this story on the stage, but it is beautifully adapted to the screen by Joel Schumacher in this gorgeously shot film. Butler’s voice is more rock & roll than previous Phantoms, but the soundtrack is still wonderful. I don’t understand why Emmy Rossum and Patrick Wilson don’t sing more in their careers—their voices are incredible as lovers Christine and Raoul. If I could sing like they could you would’t ever get me to shut up! 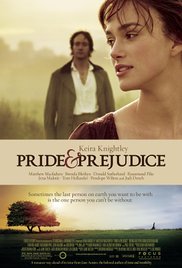 Pride and Prejudice (2005, Rated PG)
I am a bit of a Jane Austen nut, and Pride and Prejudice happens to be one of my favorite books of all time. There are multiple ways to get your Mr. Darcy fix—whether you go with the 1940 film version, the 1995 TV mini-series featuring my beloved Colin Firth, or the 2005 film starring Matthew Macfadyen. While I really loved the mini series (and believe me Firth’s portrayal as Mr. Darcy is fantastic!) it is 5 hours and 27 minutes long and holds firmly to the novel. That’s why when I want some Darcy time I turn to this beauty of a film that clocks in at just over 2 hours. Keira Knightley perfectly embodies the brilliant, spirited Elizabeth Bennet who without a doubt is the perfect heroine. The supporting cast includes Brenda Blethyn as crazy Mrs. Bennet, Rosamund Pike (Gone Girl) as lovely sister Jane, Jena Malone (Hunger Games) as naughty sister Lydia and Donald Sutherland as the weary Mr. Bennet. The scenery is gorgeous, the music is so lovely that I tried (and failed) to make it my phone’s ring tone, and the direction is superb. I love absolutely everything about this film except Lizzy’s bangs and I can live with that. If you are missing Downton Abbey, this is the film for you! 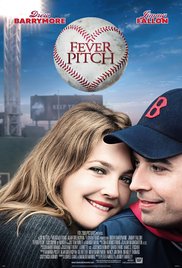 Fever Pitch (2005, Rated PG-13)
I don’t recall this movie getting a ton of press which is a shame because it’s really cute! Before Jimmy Fallon took on the huge job of hosting the Tonight Show, he starred with Drew Barrymore in this fun baseball rom-com. When workaholic Lindsay meets teacher Ben, he seems like the perfect boyfriend—sweet, attentive and thoughtful. But it turns out that Ben is hiding a secret—he’s a Boston Red Sox fanatic and once the season starts he’s a whole different person. Can Ben find room in his Sox filled heart for anyone else? This was actually filmed the year the Sox won the series and the film uses actual footage from those games which is pretty fun to watch. This film won’t change your life, but it will make you smile. 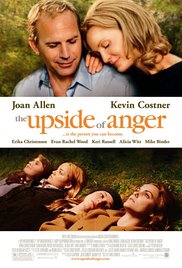 The Upside of Anger (2005, Rated R)
I’m not sure if this falls under chick flick or drama, but this is a great and under-viewed film. When Terry Ann’s husband takes off, she tries to manage the reality of her new life as a single mom to three very different daughters all with their own problems and issues. Joan Allen brilliantly portrays this newly scorned woman as she moves from anger to alcohol and then slowly to acceptance of her new circumstances. Part of her recovery involves a romance with neighbor Denny (still looking good Kevin Costner!), a former baseball star who now spends his time lazily drinking and selling autographs. Costner is perfect for this role—reminding me a bit of his Bull Durham glory days. Denny and Terry’s scenes together just crackle with sparks. Terry’s daughters (Keri Russell, Alicia Witt and Erika Christensen) are also terrific as they struggle with their depressed mom and deserter dad. 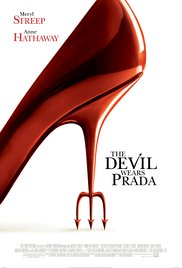 The Devil Wears Prada (2006, Rated PG-13)
This movie is best watched when you are struggling at work. Meryl Streep dominates the film as the evil Miranda Priestly, boss from hell. She tortures young intern Andrea (Anne Hathaway) at Runway magazine with an endless series of demeaning tasks. Emily Blunt is terrific as acerbic assistant Emily and Stanley Tucci is his usual hilarious self as co-worker Nigel. The story might not match the amazing cast, but it’s still fun to watch and enjoy all the fashion in the process! 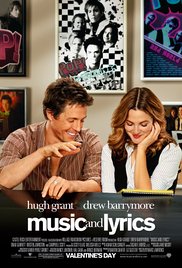 Music and Lyrics (2007, Rated PG-13)
The opening scene of this film is a faux music video from the early ‘80s featuring Hugh Grant as Alex Fletcher, one half of a Wham-style pop duo. If you recall those MTV days of bad videos, you will get a huge kick out of this scene. Fast forward several years and Alex is a washed up singer who looks forward to gigs at high school reunions and amusement parks while his former partner Colin becomes a huge superstar. Alex gets a comeback chance to write a song for popular singer Cora Corman but he’s terrible at writing lyrics. Enter Sophie Fisher (Drew Barrymore), a writer who Alex meets when she is watering his plants. Their initial meeting is cringeworthy but I promise the rest of the film is really fun. Grant is hilarious as the has-been celebrity and his dancing is a highlight of this film. 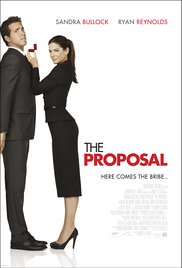 The Proposal (2009, Rated PG-13)
I can’t say that I would have ever thought to put Sandra Bullock and Ryan Reynolds together on screen but they are perfect together as boss Margaret Tate and employee Andrew Paxton. Margaret seems to have taken a page from Miranda Priestly as she is an equally vicious boss at her publishing company. When Canadian Margaret faces deportation, she bribes her assistant Andrew into marrying her. To throw the deportation agent off track, they travel together to Andrew’s home in Alaska for his grandmother’s (Betty White) birthday. The pair have perfect comedic timing as all sorts of hijinks ensue as they try to prevent Andrew’s family from finding out the truth about their engagement. This is one of Bullock’s funniest roles to date. 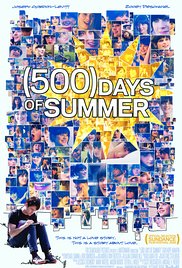 500 Days of Summer (2009, Rated PG-13)
You will realize just by the opening credits that this is not a typical love story—it’s actually a story about the joy and despair we feel when we are in love. This quirky surreal romance stars Joseph Gordon-Levitt as Tom, a guy who falls for Summer (Zooey Deschanel) the moment she walks into the greeting card office where he works. Summer doesn’t believe in relationships, but that doesn’t stop Tom from pursuing her. The story is not told in chronological order, but it’s a terrific depiction of how we feel when we fall in love—especially when Gordon-Levitt dances to the Hall and Oates classic Make My Dreams Come True. 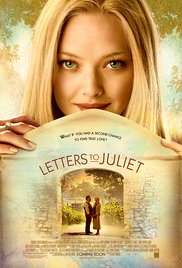 Letters to Juliet (2010, Rated PG)
One rather annoying feature of chick flicks is that they can be totally predictable. When a girl and boy meet and argue constantly, you know that they will eventually end up together. Somehow predictability doesn’t really bother me so much with this sweet Italian love story. Sophie (Amanda Seyfried) is an aspiring writer who comes across a terrific story on a trip to Italy with her fiancee. She wants to reunite long lost lovers Claire and Lorenzo (real life married couple Vanessa Redgrave and Franco Nero) after reading Claire’s lost letter that she left in a Verona courtyard. Claire’s grandson Charlie (Christopher Egan) is not too pleased to have his grandmother’s heartbreak revisited, so he and Sophie argue as they scour the Italian countryside looking for Claire’s lost love. The scenery is gorgeous, the love story between Claire and Lorenzo is touching, and it just all goes down easier than a spoonful of gelato. 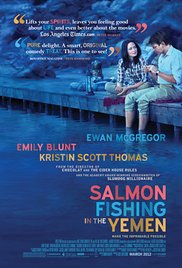 Salmon Fishing in the Yemen (2011, Rated PG-13)
What may be the worst movie title of all time probably kept people from watching what is actually a lovely feel-good movie that I really enjoyed. Dr. Alfred Jones (Ewan McGregor) is a British fishery expert who is asked by a wealthy sheik (Amr Waked) to help him with his plan of bringing the sport of fly fishing to the desert. Dr. Jones is unwilling to help with such a crazy idea (fish needing water and all) until the Prime Minister’s over-zealous press secretary (Kristin Scott Thomas) intervenes along with the sheik’s lovely business assistant Harriet (Emily Blunt). Together in their shared journey of faith, they try to make something impossible a reality. I know you think it’s impossible that a movie about salmon can be interesting, but it really can! Have some faith!

There are so many brilliant films released before 2003 — Casablanca topping my list. But don’t forget Romancing the Stone, The Sure Thing or Tootsie! Next time we will tackle the mystery and suspense genre. Happy viewing!

Back to School Fall Sports and Activities Showcase...

Where to watch 4th of July Fireworks

From the Smarty Health Corner and CEENTA: Sunglasses...