Home Events Smarty Movie Review: And the Oscar Goes To….
EventsThings To Do

Smarty Movie Review: And the Oscar Goes To…. 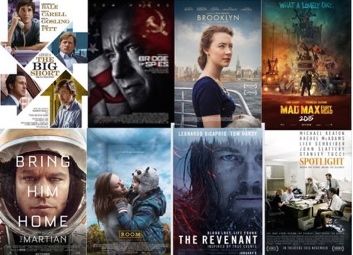 It’s Oscar time! I absolutely love the Academy Awards—it’s the most prestigious awards show of the season and chock full of brilliant Hollywood players and celebrities in fancy clothes and gorgeous gowns.  What’s not to love? In honor of this magnificent night, I’m highlighting the nominees for Best Picture.  It’s interesting that half of this year’s nominees are based on true stories—and not necessarily stories that you would normally think of translating to film.  Some movies are still out in theaters, some are already available to watch in the comfort of your own home.  Don’t forget that the 88th Academy Awards ceremony airs this Sunday, February 28th!

The Big Short brilliantly combines the fun of a popcorn flick with the prestige of a smart film that tells the incredibly important true story of the financial crisis of 2008.  During that time, my kids were toddlers, so while I was vaguely aware of the chaos, I didn’t fully understand the details of what actually happened.  As a banking town, Charlotte suffered dearly and lost over 3,000 jobs that year.  While many in the industry understand the complex issues that led to the crash, I didn’t grasp the details of how things went so horribly wrong.  The Big Short does a terrific job of explaining it all through three different yet interwoven stories told by amazing actors Christian Bale, Steve Carell, Ryan Gosling and Brad Pitt.  This cautionary tale will hopefully create a more informed public to prevent such recklessness from financial institutions in the future.
Also nominated for: Best Director, Best Adapted Screenplay, Best Editing and Best Supporting Actor for Christian Bale.

Bridge of Spies tells the true story of American lawyer James Donovan (Tom Hanks) as he defends accused Russian spy Rudolf Abel (Mark Rylance) from espionage charges during the Cold War.  Things get even more challenging when Donovan is asked to help in a prisoner exchange between Abel and captured U.S. pilot Francis Gary Powers.  This tense drama takes us all the way to East Germany in the ‘50s and Spielberg masterfully showcases the horror of life during the building of the Berlin wall.  You can tell you are watching a Spielberg movie with his meticulous camera angle choices and nuanced acting performances.  While I really enjoyed the film, it is a slower paced story heavy on dialogue and requires your full attention.
Also nominated for Best Supporting Actor for Mark Rylance, Best Original Screenplay, Best Original Music, Best Sound Mixing, Best Production Design.

This gorgeously filmed 1950’s tale introduces us to Eilis (Saoirse Ronan), a young girl who realizes that she must leave her beloved family and homeland due to the lack of opportunity in Ireland.  She arrives in America homesick and scared, but soon manages to create a new life for herself in Brooklyn, even finding love in the process.  In the end, she must decide whether to fully embrace her new life in America, or live the life she always intended to have in Ireland.  Ronan is fantastic as the naive yet resilient Eilis, and while I would never get my husband to sit through this film, it’s a great pick for a quiet evening rental.  Be warned—you will want to book a ticket to Ireland a.s.a.p.
Also nominated for Best Actress for Saoirse Ronan, Best Adapted Screenplay.

Viewing this film proves that I take my reviewing job seriously.  I haven’t ever seen a Mad Max film and didn’t know anything about the story except for the fact that it starred Mel Gibson and that Tina Turner is featured in one of the sequels.  Mad Max takes place in a post-apocalyptic future in the Australian desert. Max Rockatansky (Tom Hardy) has been captured by a group known as the War Boys and taken to the lair of creepy bad guy Immortan Joe.  These fellas are all disfigured by radiation sickness and high on drugs.  We then meet Imperator Furiosa (Charlize Theron sporting a crew cut and a metal prosthetic hand) who is trying to free Immortan Joe’s five enslaved wives from the compound.  Lots of car chases ensue, lots of people die, and that about sums up the film.  I can’t deny that the action sequences were amazing, but I actually had a migraine after watching this film as it is just non-stop blinding in your face action, noise and movement.  Of course my husband loved it—what is it with guys and car chases?
Also nominated for Best Directing, Best Cinematography, Film Editing, Costume Design, Makeup and Hairstyling, Sound Mixing, Sound Editing, Visual Effects, Production Design.

What happens when your mission to Mars goes horribly wrong and you are left behind by your crew on the red planet? If you’re Astronaut Mark Watney, you “science the s*#t” out of your habitat to stay alive.  Luckily, Watney (Matt Damon) is a brilliant botanist and he gets to work growing his own food, contacting NASA back on Earth, and getting through each day while waiting to be rescued.  The whole world becomes engrossed in the story of the astronaut who was left behind, and you too will be rooting for Watney to make it back home during this gripping and sometimes even humorous adventure.  I cannot believe that Ridley Scott was denied a Best Director nod as he has created the most beautiful scenes between Mars, the spaceship that left Mark behind and planet Earth.  This is a terrific action packed adventure that highlights the importance of working through problems and being resilient and brave even in the darkest of times.
Also nominated for Best Actor Matt Damon, Adapted Screenplay, Sound Mixing, Sound Editing, Visual Effects, Production Design.

Full disclosure—I haven’t seen this movie.  I know I should as it’s gotten fantastic reviews and is favored by many to win this year’s Best Picture award.  I just don’t know if my stomach can handle watching Leonardo DiCaprio get tortured for over two hours.  First, he’s mauled by a bear, then he’s buried alive, and then he crawls out of his grave to get revenge on the guy who left him behind.  Oh, and along the way he eats a raw bison liver and kills lots of people while looking dirty and disheveled and nasty.  This story is based on the true tale of fur trader Hugh Glass in the early 1800’s.  I’m sure that I’ll watch it eventually, but I plan on renting it at home as I expect I’ll spend half the movie with my hands covering my eyes waiting for my husband to tell me when I can safely look again at the screen. Also nominated for Best Actor Leonardo DiCaprio, Best Supporting Actor Tom Hardy, Best Director, Best Cinematography, Film Editing, Costume Design, Makeup and Hairstyling, Sound Mixing, Sound Editing, Visual Effects, Production Design.

This beautiful film tells the story of young Jack (the phenomenal Jacob Tremblay) who lives with his Ma in Room.  Jack has never left Room, a tiny locked shed with a bed, a toilet and tub, an armoire and a small kitchen space.  What he sees on television is all make-believe and only what exists in Room is real to him.  His Ma (Brie Larson) knows otherwise as she led a perfectly normal life in the real world before being kidnapped and locked in Room.  This story highlights the impenetrable bond between mother and child, and I guarantee you will need a full supply of tissues at the ready when you watch this amazing film.  Why that adorable little Jacob Tremblay wasn’t nominated is beyond me as he was phenomenal and I couldn’t take my eyes off of him.
Also nominated for Best Actress Brie Larson, Best Director, Best Adapted Screenplay.

Spotlight is the all too true story of how the Boston Globe broke the devastating news of abuse in the Catholic church. The film details the difficulty reporters had of bringing this terrible story to light. The Spotlight reporters (portrayed by Michael Keaton, Mark Ruffalo, Rachel McAdams and Brian d’Arcy James) begin their journey by investigating a claim of abuse against one priest, but the story grows as the team learns that the allegations were covered up by the Cardinal to protect the church.  As the team digs deeper into the story, the number of abuse cases grows.  What started as a relatively small local story quickly spirals into a worldwide crisis for the Catholic church.  This difficult story is perfectly paced and beautifully acted and you become completely immersed in this detective story even though you already know the ending.
Also nominated for Best Actor Mark Ruffalo, Best Actress Rachel McAdams, Best Director, Best Original Screenplay, Best Film Editing.

From the Smarty Education Corner and CCDS: Prepare Well For School and You Will Be Prepared for the New SAT

A Rite of Passage