This week’s book is Flight of Dreams, a historical thriller by the delightful Ariel Lawhon, who was kind enough to answer questions for me, below. The book goes on sale February 23rd, and I have a feeling it will be huge. 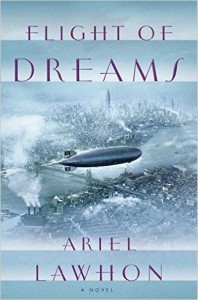 Three minutes. This is when the screams really begin to bother him. Screams from within the ship. He can hear the terror and fear and pain of men caught in the flames. But there is something worse about the screams coming from every direction across the field. The spectators can do nothing but watch in horror as their friends and love ones are consumed within the Hindenburg. They are watching people die. And they will live to remember it.

In the course of human history, there are some events that so completely worm their way into the human psyche we are still captivated by them many lifetimes later. The crash of the Hindenburg on May 6th, 1937 is one such occurrence, even though as historical disasters go, the carnage was relatively limited. 36 people lost their lives, including one on the ground, as the massive German Zeppelin caught fire and spectacularly crashed to the ground at the very end of its transatlantic journey.

But nearly eighty years later, we’ve all heard of the Hindenburg. Why? One of the reasons is it was one of the first major catastrophes to be publicly broadcast. You can watch newsreel coverage at this link, if you want to see it. It’s almost unbelievable that anyone survived it, given the extreme speed with which it morphed from a luxurious floating airship into the world’s most horrifying fireball. The massive explosion also became famous because of the myriad of theories proposed to explain what could have gone wrong: sabotage, incendiary paint, lightning, a suicidal nut firing a Luger pistol onboard, etc.

Ariel Lawhon’s Flight of Dreams is a compelling mash-up of historical fiction and suspense, told from the POV of various passengers and crewmen on the doomed flight. There’s Emilie Imhoff, a fetching, friendly air hostess, who radiates competence even as she hides a dangerous secret. She’s also busy dodging the affections of the ship’s navigator, a handsome, mercurial man named Max Zabel, who is determined to rescue her from the peril she faces in Germany. Then there’s a mysterious American, a pair of relentless German journalists, and a befuddled but indefatigable cabin boy called Werner Franz. Together with all the other souls on board, they bring a human face to the ill-fated voyage, providing a voyeuristic glimpse into the mysteries still surrounding the last 3 1/2 days of the zeppelin.

Adding a degree of intrigue is the fact that Lawhon, the author of the acclaimed 2014 novel The Wife, the Maid, and the Mistress, used real people for her characters, fictionalizing their thoughts and actions, but relying as much as possible on known information. And how do you create suspense when writing about a foregone conclusion? In this case, the tension arises from the reader’s knowledge that the characters are careening helplessly toward an inferno they know nothing about, unable to affect their fates. Some of them will live, and some of them will die horribly, just as their real-life counterparts did eight decades ago. (So control your impulse to google them ahead of time!)

Lawhon’s speculative cause of the explosion is startling, to say the least, although probably not the most plausible. But it makes for a dramatic and enjoyable read. And—great news—another novel about a fascinating historical event is in her future! I was lucky enough to be able to interview Lawhon about the novel, her writing process, and her personal intersection of motherhood and career. See below:

Kimmery Martin—What sparked your interest in the Hindenburg?

Ariel Lawhon—I read an article about the Hindenburg on the 70th anniversary of the crash and immediately thought it would make a great novel. But I was knee-deep in a different book and had to put the idea aside. And then four months after THE WIFE, THE MAID, AND THE MISTRESS was published, I sat down with my agent and editor to discuss ideas for my next book. I mentioned that I had an idea that took place during the last flight of the Hindenburg and they were both intrigued. So I wrote a proposal and few sample chapters and the rest is history. I’ve been writing for many years but I can’t think of anything that came together as easily as this novel.

KM—How did you select which passengers would become major characters in your book? Was there anything in particular that appealed to you about Emilie Imhof, the only female crew member?

AF—I knew I wanted Emilie Imhof to be front and center given that she was the only woman to ever work on board a zeppelin but apart from that I was very methodical. I didn’t want any of the obvious choices such as the Hindenburg’s Commander or high-ranking officers. I also didn’t want any of the flashier passengers such as the American Heiress, Margaret Mather, to tell the story. I wanted my narrators to be more obscure. At the beginning I only knew that I needed four narrators: two women and two men. (I ended up adding the Cabin Boy halfway through writing the book. I fell in love with him because he reminds me so much of my own adolescent son.) So I searched the crew and passenger lists for people that interested me personally. Emilie was a given, but when I found Gertrud Adelt and saw how incorrigible she was, I couldn’t resist. And then as far as the men were concerned I chose Max Zabel for his proximity to the control car and his role as postmaster on the ship. I found The American last and I spent much of my time dancing around what little is known about the man in general.

KM—The ending of Flight of Dreams has a shocking plot twist (or two). Without giving too much away, did you know from the outset you’d arrive at this explanation of the disaster?

AL—In short, yes, but only because I knew that in my version of the story—my idea of what could have happened—I wanted the cause of the Hindenburg’s demise to be human. However, many of the specifics came to me as I wrote. And then of course there is the one twist that gets the biggest reaction (you know the one) and that was decided from the very start. If I was to honor history there was no other way it could end.

KM—Talk about the process of fictionalizing the actions of real people. The survivors of the Hindenburg are all deceased now (with the exception of Werner Doehner?) but they have living relatives. How do you balance good storytelling with respect for the individuals whose lives are portrayed?

AL—This is the hardest part of what I do. I have to infer so much about these people in order to write a compelling story. And all of those things cannot be flattering—not if I actually want readers to be invested in the book. So that leaves this really delicate balance between honoring everything history teaches us about a person or an event while building my narrative within the blank spaces. My simple goal is always to be honest (sticking to what we can verify) and honorable (treating the memory of these men and women with respect). After my last book was published I was actually contacted by a living relative of one of my characters. Needless to say, it was a huge shock but very helpful in navigating this particular genre and ultimately a wonderful experience.

KM—Tell me a little bit about your writing process. Are you a plotter or a pantser? Do you have any writing routines? When did you realize you wanted to write novels?

AL—Great question. Short answer: the most detailed plotter you’ve ever met. To me, research and plotting are king. Very little happens by accident in my novels but when it does it changes everything for the better and leaves me rather stupefied. Even though I write by a very strict routine, I’ve learned that there is only so much you can plan on the front end. That said my process is probably 75% method and 25% discovery. It’s a balance that works very well for me.

KM—You have four sons (!!) So, obviously, I speak for every mother in America when I ask: how do you get anything done? (Related question: what are you working on now?)

AL—Honestly, writing is the thing that keeps me sane. I’ve written since I was a young child but when I became a mother it turned into the one thing that I did simply for myself. I had four babies in five years and when they were all little writing became the thing that stemmed those feelings of losing myself entirely to motherhood. It was then, and remains to this day, my best form of self-care. It’s the creative outlet that most energizes me and reminds me who I am. I’m just very fortunate that I’ve been able to transform this lifelong passion into a career. That said, there were many, many years where I didn’t get much sleep or keep a clean house. But seasons change and everyone is in school now and there’s a bit more balance around our home.

My next novel was just announced last month. It is tentatively called I WAS ANASTASIA and is a dual narrative exploring the mystery surrounding the death of Anastasia Romanov and the claims of Anna Anderson, the woman long-believed to be the young Grand Duchess’ most famous imposter. Wish me luck, this subject is not for the faint of heart!

KM—And finally: what are some of your favorite books?

AL—OUTLANDER by Diana Gabaldon. WATER FOR ELEPHANTS by Sara Gruen. THE TIME TRAVELER’S WIFE by Audrey Niffenneger. THE KITE RUNNER by Khaled Housseni. THE HELP by Kathryn Stockett. Also, I’m currently obsessed with Susanna Kearsley, Liane Moriarty, Deana Raybourn, and Jasper Fforde. And of course I will re-read anything by Agatha Christie, C.S. Lewis, J.R.R. Tolkein, or George MacDonald. But if I have to pick one, I always tell people that we cannot be friends unless they read and love THE THIRTEENTH TALE by Diane Setterfield.

It’s time for a new roof, now what?

Campout! Carolina encourages you to get outside and...