Hoo boy. I have been waiting for five years for Jonathan Franzen to release his latest work. First off, let me elaborate as to why I like him. Burdened with verbal geekiness as I am, it’s a delight to read an author who wields language with such blithe abandon: if there’s an esoteric word that fits the situation with precision, Franzen is going to employ it, all advice to the contrary be damned. (Writers are constantly admonished not to use big words if smaller, common ones could suffice, lest you alienate somebody with your pretentious abuse of Thesaurus.com.) Which is not to say his sentences necessitate a dictionary app at every other word. He’s so witty and interesting! Consider the following description: 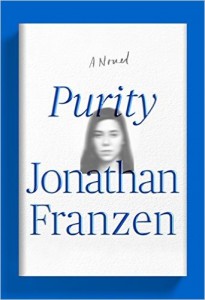 “To drive east on Amarillo Boulevard was to pass, in quick succession, the high-security Clemens Unit prison complex, the McCaskill meat-processing facility, and the Pantex nuclear weapons plant, three massive installations more alike than different in their brute utility and sodium-vapor lighting. In the rearview mirror were the evangelical churches, the Tea Party precincts, the Whataburgers. Ahead, the gas and oil wells, the fracking rigs, the overgrazed ranges, the feedlots, the depleted aquifer. Every facet of Amarillo a testament to a nation of badass firsts: first in prison population, first in meat consumption, first in operational strategic warheads, first in per-capita carbon emissions, first in line for the Rapture. Whether American liberals liked it or not, Amarillo was how the rest of the world saw their country.”

(Note to pissed Texans: Don’t be mad. The passage goes on to toast the charms of the Lone Star state too.) Whether or not you warm to the smarmy political tone of the paragraph, it’s such a fabulous description: “Brute utility and sodium-vapor lighting” perfectly conveying a nighttime drive past a bunch of massive, flat-roofed factories. The entire novel is like this, infused with subtle humor and insightful characterization.

The protagonist of Purity is the eponymous (see, I can’t stop myself) millennial Purity Tyler, who goes by Pip. Pip’s childhood was an unusual one—she grew up with a doting but reclusive, neurotic mother who refuses to reveal the identity of Pip’s father, which leaves her yearning and confused. As the story opens, she’s squatting in Oakland with a trio of weirdos, burdened by horrible student debt and working a succession of lame jobs. Then some seemingly-random German visitors set her on a bizarre path that will change her destiny, ultimately bringing her in contact with the novel’s other three pivotal characters: journalists Tom Aberant and Leila Helou, and WikiLeaks-esque hacker/whistleblower Andreas Wolf. The POV shifts between these four, although Pip’s perspective dominates. The backdrop alternates in both time and location, with disconcerting jolts between the Santa Cruz mountains of California, the slums of Oakland, East Germany during the fall of Communism, and the present-day Bolivian jungle, among many other times and places. Eventually, all of these locales and characters will coalesce as the connections—some murderous, some broken, some startling—between them become clear, and Pip uncovers the long-buried mysteries of her family. It’s a big, globespanning, encompassing novel.

Weeellll, um, I really wanted to. And I recommend reading it, for sure. Both of Franzen’s earlier big novels—The Corrections, and Freedom—rank up there as some of the best books I’ve read. He’s iconic among American authors for his command of multilayered, contemporary relationships and incisive dialogue; acclaimed for his talent, renowned for his controversial sociopolitical commentary.

But geez, there are limits to how much misogynistic sexual dysfunction and toxic, putrid relationship implosions you can stomach before you fling a book away. The incessant bad mothering is kind of egregious too. However: the writing is brilliant. The characters are as fully-formed as it’s possible to be. The dialogue is, as always in a Franzen novel, delicious. But somehow as a whole, it is…unappealing. There’s a near-interminable amount of exposition, which can be confusing, especially reading it on an e-reader where you can’t flip black and forth to remind yourself of who and when and where you are. And the characters, though they’re interesting and articulate and compelling, are also off-putting in their tremendous self-absorption. Would it sabotage one’s literary…purity…to portray at least some of the characters as somewhat lovable? I’m hesitant to criticize Franzen, because of his talent and the epic sweep of his novels, and also because I don’t know how anyone could have written this any better. This is one of those times it seems ridiculous to assign stars to a book—because how can you compare something like this to the average crappy rote novel?

I just wish I liked this story more.

Smarty Momcast: An interview with Angel Rutledge of...