Oh my. Where to begin?

Primates of Park Avenue might be the buzzy book of the summer, at least among the demographic of well-off women in their thirties and forties. Even before its release, the book generated controversy: about its accuracy as a memoir, about its anthropological posturing, and about the notoriety and outlandishness of some of its claims: ‘Wife bonuses’ at the end of the year for high-performing stay-at-home moms? Hiring black-market disabled Disney ‘guides’ so you can skip every line? 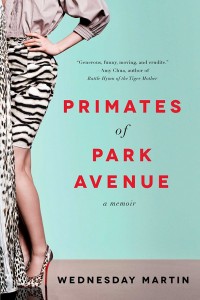 Authored by Wednesday Martin, POPA is marketed as an anthropological memoir, a case study of the uber-rich Manhattanite housewives who populate the Upper East Side, partly written from the perspective of a scientist ‘going native’ to infiltrate and document the behaviors of the group. The entire book is studded with pop-anthro commentary:

“As happens for so many nonhuman primates who transfer into a troop, I was stuck at the bottom of the dominance hierarchy, regarded with suspicion, alternately ignored and harassed…There is no one lower than a new female in a baboon troop, and if she fails to build coalitions with the mid-level and top females, her life circumstances and those of her offspring can be dire.”

“…extremes of ornamentation and elaborate “beautification practices”—not infrequently involving the mutilation and reassembling of their bodies and faces into a more “pleasing” arrangement by various “body and face shamans”—are central to the lives of the reproductive and even post reproductive females under consideration.”

Translation: Other moms were mean to the new mom, and a lot of women in Manhattan have had plastic surgery. Got it?

The basic premise is this: Martin and her husband, a financier, decide to move to the ridiculously snooty Upper East Side of Manhattan. This is a world dominated by the 0.01%, flush with hedge fund billionaires and titans of industry. However, men barely get a mention in the book, which is concerned primarily with the beautiful non-working wives of the billionaires, who are, more specifically, the mothers of their young children. To belong to the tribe, you must be fantastically wealthy, and a precise blend of skeletally scrawny yet ripped. No one is bigger than a size 00. No one eats. Everyone pops pills and guzzles alcohol. Everyone is a member of hard-core gyms (Physique 57 or SoulCycle) whose workouts Martin likens to a sort of pulsating group sex experience. It is de rigueur to drop off your child to his $40,000-a-year intensely competitive preschool wearing your sky-high, red-soled Louboutins, and your softest chinchilla thrown over a fringed Chanel or a floral Givenchy, carrying your $50,000 Birkin, all the while groomed to meticulous perfection with an immaculate blond coif and a face flash-frozen by Botox into an affectless sneer. (Martin seems to reserve a particular ire for Botoxing one’s wrinkles, explaining at one point in the book that it literally causes you to feel less empathy for others, since your facial muscles are less able to look concerned.)

But it is the cruelty of the UESers that resonates. As Martin describes them, they are vicious Queen Bees who will snub you dead if you dare make eye contact in the preschool halls. They will bash you out of the way with their giant designer handbags if you walk toward them on the street. Want your kid to play with their kid after school one day? Propose it, and they will turn and stalk off, not so much offended that you tried to speak to them as they are simply unable to even hear you, because you don’t matter enough.

One immediate effect of POPA is to confer upon the rest of America a vivid case of schadenfreude, because now we can all pat ourselves on the back and say, “I might be a fat, impoverished, Target-wearing slob, but at least I’m not as mean and as miserable as these trolls.” Martin mostly portrays these women as drowning in a swamp of anxiety, forever mired in the soul-sucking pressure vortex of having to compete with all the other alpha wives. For every man in Manhattan, there are two fertile women. It’s a dog-eat-dog world if you’re a relatively powerless trophy wife: your husband can always replace you, not to mention the constant adrenaline-spewing danger of someone trumping you by wearing the season’s first Alexander McQueen sundress.

Okay, I’m worn out by the snarkiness of just writing this review. Can all this really be THE ONLY WAY of life in zip code 10021? Or is it possible Martin exaggerates just a little? All cities have their cultural elite, but it’s kind of unfathomable to think of bitchiness on this scale occurring where I live. (I mean, I can personally say that I’ve never forced anyone off the sidewalk with an intimidating Hermès bag just to display my social dominance. Or at least, I could say that before I read this book. Afterward, I decided to conduct a little sociological experiment by walking directly toward people on the streets of uptown Charlotte and at the three most exclusive country clubs here, figuring that would garner me at least a few ultra-high-net-worth individuals who’d play chicken. But everyone just smiled politely at me and got out of the way.) Okay—I know, I know—people in the South shouldn’t throw stones. After all, we’re famous for the correct way of dealing with one’s social inferiors: coo at them in a sugary voice and then pityingly bless their hearts as soon as they turn their backs. But we don’t actually shove them!

Speaking of schadenfreude, the New York Post is having a field day. Martin didn’t name names of the people she observed in her book, but the Post felt no such obligation to withhold, and they spewed forth a list of likely culprits. They also turned on Martin herself, pointing out, in the words of one critic, “holes in her account big enough to drive an Escalade through.” Memoirs are supposed to be factually accurate, or at least post a disclaimer if dates and times and people have been altered. (I’ve read that Simon and Schuster, the publisher, is amending future editions to include this.) Also, the anthropological conceit of the book wore a little thin, since Martin is not actually a field researcher, or even an anthropologist. And she occasionally came across as an unsympathetic figure, despite the bullying she endured, since large chunks of the book were devoted to topics such as her quest to acquire her own power-bestowing Birkin bag. (This got better near the end, when a personal tragedy finally allowed Martin to forge sisterly bonds with her former tormentors.) Overall—she really is a fine writer, and the concept of the book is fascinating, especially when she drops the pseudoscientific comparisons and just relates what happens. I can’t help thinking this would have been a better read had it been fictionalized. But the movie rights have already been acquired, so brace yourself for more.

Prose style: 4.5 (for the narrative parts) 3 for the anthropological commentary
Plot: 3
Character development: 1 (Would have been interesting to hear more individualized stories)
Originality: 3
Entertainment value: 4

Announcing the Smarty Winners of the Brilliant Sky...

Smarty Cooking School: How To Make A Perfect...

Smarty Scoop On Weekend Activities May 7-9