Smarty Book Review: I AM PILGRIM

When you’re wounded and left on Afghanistan’s plains,
And the women come out to cut up what remains,
Just roll to your rifle and blow out your brains
And go to your God like a soldier. 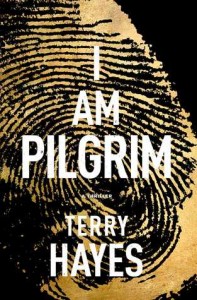 These words, penned by the 19th century British writer Rudyard Kipling, were written in description of the 2nd Anglo-Afghan war, which began in 1878. As we all know, we are no more enlightened in the 21st century than we were in the 19th; the battles for Afghanistan still rage today, churning up a swathe of the world where bloody geopolitics consumes just as many lives as ever.

We know this, but most of us don’t live this, of course. When’s the last time you dodged a sniper bullet or saw your loved one beheaded? In America, our concerns are more mundane: I, for one, must battle the crippling anxiety of having signed up for too many volunteer commitments. But I have a family; I have love in my life. Not so for either of the resourceful, fascinating men who dominate this book.

Our protagonist, who is known by many aliases, is Pilgrim, and he is the man who quotes the Rudyard Kipling poem. He’s a loner, a highly intelligent, highly lethal super-spy, who has forgone the warmth of regular human connection in order to carry out his high-stakes job policing the world’s hotspots. Peripatetic and lonely, Pilgrim carries the reader to Russia, to Saudi Arabia, to France and Germany, to Turkey, to Afghanistan, where the gorgeous narration conveys the backdrop of these places as perfectly as if you were standing alongside him.

The opening scene of the book, however, takes place in New York City, where a once-beautiful young woman is found in a bath of acid. The investigating detective recognizes that this murder has some very unusual characteristics, and he calls in Pilgrim for assistance. (Yes, initially it is unclear how a NYC cop would have the ability to summon an elusive CIA spook for forensic help. You must be patient.)

I like to read books without having a clue about the plot up front, so when I started this one, I thought: Oh good. Murder mystery. I like those. But all of a sudden, the NYC murder vanishes and is replaced by convoluted international intrigue, and I started to realize how different this book is. It’s a murder mystery, and it’s a political spy novel, and it is a beautiful literary character study, all wrapped up in a plot that seamlessly integrates those components. Pilgrim is activated by the highest levels of the U.S. government to intercept a rogue terrorist, and along the way, he discovers a bizarre connection between the murder of the woman in New York and the terrorist’s plans to destroy the Western world.

The POV of the story alternates between Pilgrim and the antagonist, who is an embittered Saudi national dubbed ‘the Saracen.’ (In case you’re wondering, ‘Saracen’ was a medieval term for Muslim.) The Saracen is a bad, bad dude, but Hayes, the author, depicts him with multilayered psychological detail, allowing the reader to view him as more than just a caricature of evil. Not only do you see how he became what he is, but you also comprehend his thinking, even as you recoil from the unspeakable calamity of his plan for America. The Saracen and Pilgrim, mortal enemies, are nonetheless perfectly matched: their minds function with a rare luminescent brilliance that allows them insight when the average person would be stumbling blind. Each man’s determination and willpower are rivaled only by the other’s. It’s a zero-sum game they play: one of them cannot survive, and if it’s Pilgrim who falls, America will fall with him.

The threats faced by Pilgrim in the story cover everything from waterboarding to gun battles to germ warfare, so there’s plenty of stereotypical guy violence to satisfy readers of traditional thrillers. (Side note to hardcore anti-vaxxers: Immerse yourselves in this book’s description of the pre-vaccine era, and then consider what it would be like if we were still dying of agonizing, disfiguring, extremely lethal diseases like smallpox. This vaccine may have been the single greatest invention in the history of medical sci—Oops. Sorry! My inner doctor momentarily escaped.) This novel will doubtless someday be a blockbuster, especially as the author is a Hollywood screenwriter. Like all true literary nerds, I just can’t imagine how the movie version could ever be as good as the book, though. Final thought: pay no attention to the fact that Hayes is best known for Mad Max 2: The Road Warrior. I promise this is nothing like that.

I think I’ve managed to make this sound somewhat cheesy, but I Am Pilgrim is (mostly) believable, and riveting, and terrifying. And it’s beautiful. It’s the kind of book that gives you anxiety, not just because of the subject matter, but because every page you turn is one less page you’ve got left to read. I so did not want it to be finished!

What does Santa bring these days?

Downloading this one for Spring Break 2K15!

Hmmmmmm I love spy novels. Reading this next. Sounds very much like a Daniel Silva novel.

I started this one and was terrified after the first couple of pages and stopped – gonna brave it!! You are the third person to tell me how amazing this book is. Great review!!

I am downloading this now! Wouldn’t have thought it would be a good match for me, but your review has me excited to make it my next read.