Recently I realized that it was the passing of an era.  For years, I have been known as the guy with the BOB stroller, but realize I haven’t used it in months.  It just sits in the back of my minivan, lonely and unused.  My youngest is in preschool now, so I can workout while she is in school.  All four kids are mature enough now that I don’t need to use it out shopping or at the practice fields.  It’s kind of strange.

For the first six and a half years I was home (2003-2010), I relied on a Maclaren wanna-be umbrella stroller from Baby Trend.  It served its purpose, but something was missing.  Unfortunately for me, the BOB Revolution stroller came out a couple years AFTER I got my umbrella stroller and about six months AFTER I took out a second mortgage on my house to buy a BOB Ironman Duallie (aka-two seater).   The Duallie is a great jogging stroller and it served me well for many years.  After we had our third child, I would take all three out for a walk solo (two in the Duallie and one in the Baby Bjorn).  That was always an adventure.  I looked like I belonged in a sitcom.

Watch out!  Crazy dad with kids everywhere! (True story: After a long afternoon outside with four young  kids and two of them melting because it was “time to go inside,” one of my neighbor’s kids, probably five at the time, politely told me, “You have too many babies,” and walked home.)

As much as I liked the Duallie, its fixed front wheel limited its utility outside of jogging.  It was a housebound stroller.  Unless we were doing serious walking, I usually went back to the umbrella stroller for child number three and had the older two walk.  This all changed one fateful day.

We were at the park (child number three in the aging umbrella stroller) when child number one took off for the other end of the grassy field.  I gave her some time figuring she’d stop and come back soon, but NOPE – something had her attention and it wasn’t my voice…

Before you ask, back in those days I was ALWAYS flying solo at parks.  Believe it or not, it’s hard to make friends as a stay-at-home dad and making park playdates is a pipe dream.  The daytime mom crowd at parks tends not to chat up random men with kids.  More on that in a future blog. 🙂

I remember the day I brought it home.  It was Memorial Day 2010 and, according to the REI website, they had the original Bob Revolution Single Jogger on sale for around 40% off (totally unheard of at the time).  I decided I had to get it!  Aside from its AWESOME functionality and off-road capabilities, it would help me be cool again.  We were expecting our fourth child and I needed some help with my image (see story above).  I went to REI and looked at it for all of three seconds before I pushed it to the nearest checkout (after grabbing the infant carrier attachment)!!   One of the best purchases of my life!

It’s like an RV for kids.  (As an aside, I fantasize about travelling the country in an RV, so this is high praise.)  They can live in it…for YEARS!

Among its many uses:

Transportation– Okay, obvious, right?  Well, when the kid is small or you don’t feel like walking at a two year-old pace, it’s great.  When you have multiple kids, it’s easy to keep track of them in parking lots by having them all grab hold of the stroller like a parking lot flotation device.  If one of the older kids got tired of walking, I would hold the lighter one in one arm and let the older one ride in front while I pushed with the other hand.  It’s that maneuverable and easy to push!

Security-My kids were ‘runners’ when they were young.  I always marveled at the moms and dads whose kids stayed right at their side or within a reasonable distance while outside or out shopping.  As for mine, if they weren’t strapped in, they were off on an adventure. They would barely even look back as they tried to run off into the sunset.  As a crowd control measure, I went to keeping the youngest buckled in a stroller so I could chase after older siblings if necessary.  Fortunately for me, my kids generally like being in the stroller and didn’t fuss or complain about it.  They would just sit there and take it all in.  We have LOTS of kids on our street, so afternoons outside were never boring.  There were plenty of things for stroller-bound kids to watch and observe.

I was so strict about it that my neighbors were shocked when I unbuckled my then-eighteen-month-old son and he popped out of the stroller and started RUNNING.  They thought I had him in there because he couldn’t WALK yet! 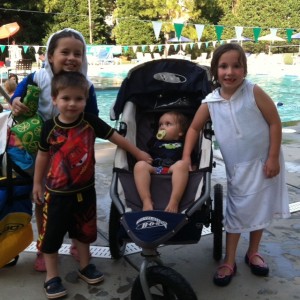 Storage-This one is HUGE for me.  As a stay-at-home dad, I don’t carry a purse or diaper bag, so the under and behind the seat storage of the BOB was essential for my survival.   Not to mention the incredible amount of stuff you can hang off the handlebars

I’ll admit it, a few times I had one of the older kids sit on the space over the front wheel to act as a counterbalance for all the stuff I had hanging off the back. 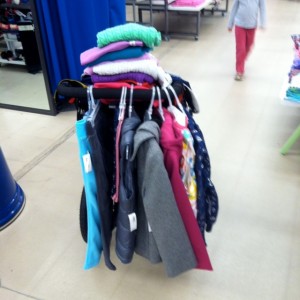 Naps-Nap outside or on the go while sheltered from the sun, wind, rain and bumps in the road (the thing has shocks!).

Shelter-When it’s time to watch a soccer game in the rain, nothing beats the shelter of a BOB. 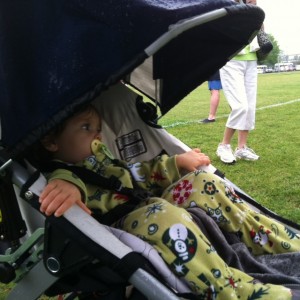 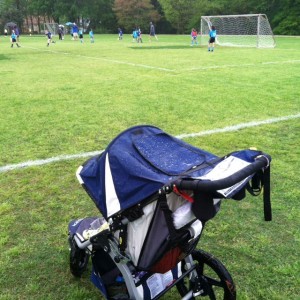 Meals/Snacks-When you are the third or fourth child in a family, you are one step above luggage.  You go where everyone else goes, regardless of meals, naps, whatever.  So, if you have to be at an older sibling’s practice or event and you just woke up from a nap, nothing beats a meal in the BOB with the special tray attachment. 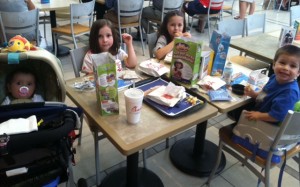 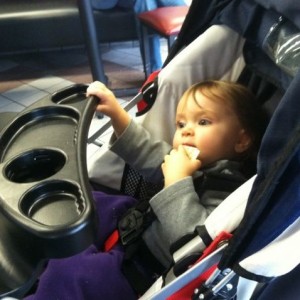 Entertainment-Give the kid an approved portable electronic device and it’s a “Kid Cave”!

At the end of the day, I LOVED my BOB.  I was rarely (ok, never) seen in public without my trusty BOB stroller.  People joked that my hands were permanently attached to it.  It was my security blanket.  As long as my hands were on the BOB, all was good with the world!  Now that I have unleashed all four kids from the BOB, where do I go from here?  Who am I?  It’s existential at this point.

Smarties, have you ever had to let go of something you considered an intrinsic part of your parenting being, an appendage even? 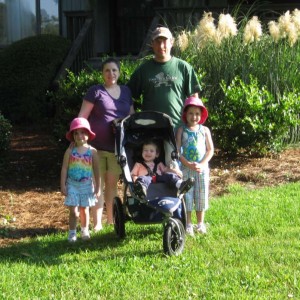 How to help your adolescent develop a positive...

Back to School Fall Sports and Activities Showcase

Smarty Podcast: A Convo About Remote Learning with...

I feel the same, Zack! We’re on our 3rd BOB. I gave (yes, GAVE) my Duallie to a friend and she said “oh, thanks, looks like a cool stroller.” I said “excuse me! This is a life changing stroller and you better appreciate it!”