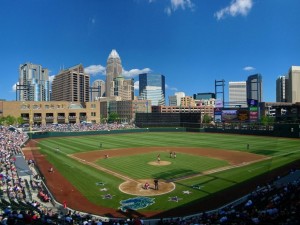 When you think of big-time sports cities, Charlotte is probably not the first to come to mind. In fact, Charlotte is likely trailing cities such as New York, Philadelphia, Boston, Dallas, Los Angeles, and Chicago which are typically trademarked as the Sports Capitals of the US because of their extreme fan bases and cyclical success.

I recently attended the Miami Heat versus Charlotte Bobcats game with my dad and brother, and it dawned on me that Charlotte is well on its way to earning its share as one of the great US sports cities.

Charlotte is home to a NFL team, NBA team, professional lacrosse team, minor-league professional hockey team & baseball team, an annual professional golf tournament and NASCAR race not to mention the countless local college sports teams. The QC surely has all of the qualifications for a big-time sports city, but the best part is that we are extremely family friendly and quite affordable.

Those who have lived in Charlotte long enough know what a big deal high school sports are, especially football. High School football games are a family affair sprinkled with all of the excitement that you can find at a college football game with tailgating, a sea of school spirit, and pride for both the winning team and the losing team. It struck me that night at Time Warner Cable Arena that sports are surely important pastimes for Charlotteans, and whether people enjoy watching them or playing them, Charlotte has a sports team for everyone.

The next year will be monumental for Charlotte sports. The Charlotte Bobcats are once again adopting the name of the Charlotte Hornets which has the entire city “buzzing” with anticipation for the revival of years past and excitement for the years to come. To add to that, the Bobcats have had a very successful season so far with a record of 21 wins and 28 losses in comparison with their last season in which they finished with 21 wins and 61 losses. Imagine the future city spirit as this team improves and builds with Kemba Walker and the local father-of-hoop himself, Michael Jordan.

Similarly, the Panthers had an impressive season making the playoffs for the first time since the 2008-2009 season which ended as we suffered a heartbreaking loss to the Arizona Cardinals. This past season was extremely successful by all counts as the Panthers finally had their first winning record since John Fox and Jake Delhomme left the team. Ron Rivera won 2013 NFL Coach of the Year and the young Carolina Linebacker, Luke Keuchly, won 2013 Defensive Player of the year. The base is in place with such a successful 2013 season and with stars like Keuchly, Cam Newton, Mike Tolbert, Steve Smith, DeAngelo Williams, and Coach Rivera returning next year, many Panthers fans are excited to see what the next season has in store for the team. If they do in fact make it back to the playoffs again next year, the city will be buzzing again!

The Charlotte Knights are also undergoing a great change in the next year, moving uptown into a brilliant brand new stadium that will feature the widest video board in the minor leagues with great Knight AAA baseball. The new stadium will seat 10,000+ fans and is expected to attract more than 600,000 fans to uptown in the first year. Knights games are regular stops for Charlotteans, but with the exciting move uptown this year, I expect we will become one of the finest AAA baseball cities around.

Another sweet addition to the Charlotte sports scene was the arrival of the Charlotte Hounds, a professional Men’s Lacrosse team founded in 2011. The Hounds are an enjoyable event for young, aspiring lacrosse players as well as full families alike. They play uptown in the historic American Legion Memorial Stadium which has hosted everything from Presidential rallies to the annual Shrine Bowl to Pearl Jam and Jimmy Buffet. Seeing the Hounds play and getting a peek at the historic Charlotte site are two perfect reasons to give it a try. The kids can often meet the players after the games or serve as ball boys and girls during. It is an extremely family friendly environment, very affordable, and fun for those who love lacrosse and those who have never seen a game.

Those who live in South Charlotte are familiar with the Wells Fargo Championship, the annual professional golf tournament that lasts for a week in the spring and takes place at Quail Hollow Country Club. This event is frequented by big-name golfers like Phil Mickelson, Rory McIlroy, Rickie Fowler, and our very own hometown hero, Webb Simspson. One annual highlight of the tournament is the Wednesday Pro-Am which will feature many local and national celebrities as participants and is always an exciting family event as the spring gets rolling here in the Queen City.

Charlotte is also known as the national home for NASCAR. Aside from the NASCAR corporate headquarters and Hall of Fame, Charlotte will host two major races with one in May and one in October. Not only do the teams race here, but many of them live here in South Charlotte or up by Lake Norman. So take in a race at Charlotte Motor Speedway and see a true test of Southern hospitality!

Charlotte also has a growing place in college athletics. If you are looking for a more low key way to take in some competition, venture out to UNCC for a basketball, baseball, soccer, or a football game. The facilities are outstanding and family fun abounds. Davidson offers the same opportunity coupled with a beautiful, small college town.

Playing sports is often as much fun as watching especially when you’re in an environment with crazy, competitive fans. Charlotte is home to sports teams of all kinds which inspire friendly competition, passion, and motivation in fans of all ages. There is truly something for everyone at the right pace and price!

Smarties, I hope you can put some of these on your 2014 bucket list for sure!

Passports for Your Kids

The benefits of dance therapy and how Miller...