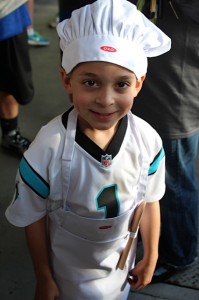 By our Smarty friends at Charlotte’s Cookies for Kids’ Cancer: www.charlottegoodcookies.com

The boy who taught Charlotte just what Good Cookies we could be by fighting for new treatments for pediatric cancer will inspire the region’s largest bake sale this weekend, just days after he lost his battle against the disease.

Grier Christenbury, the 9-year-old son of Amy and Jeff Christenbury who battled a rare cancer of the nervous system and inspired the local charity, passed away November 26th. Grier’s seven-year odyssey to fight the disease and his mother’s passionate plea to raise awareness for underfunded pediatric cancer research, helped propel Charlotte’s annual bake sale to the most successful fundraiser each year for Cookies for Kids Cancer. Last year’s bake sale raised just over $200K, and organizers hope to top $300K this year.

Tables will be spilling over with cupcakes and cookies at this year’s 6th Annual Cookies for Kids’ Cancer bake sale at Park Road Shopping Center and three other locations. But the event has never been about the cookies. It’s about the Good Cookies – the people who raise money for less toxic therapies for the children fighting cancer – and the Tough Cookies – the children who endure toxic chemo and damaging radiation in their quest to keep living normal lives. 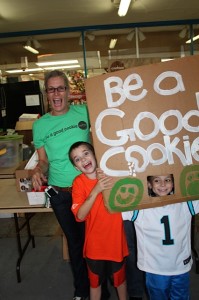 Cookies for Kids’ Cancer was created in 2008 by Gretchen Holt Witt, a fellow “Cancer Mom” that Amy Christenbury befriended during hospital stays in New York. Holt Witt’s son, Liam, also battled neuroblastoma and passed away in 2011.

Cookies for Kids Cancer started in 2008 to provide funding for research to advance the most promising new, less toxic pediatric cancer treatments to clinical trial as quickly as possible. Nearly $4 million has been awarded in pediatric cancer research grants. With a successful bake sale this December, Charlotte’s CFKC chapter hopes to raise its total contribution to the charity an even $1 million.

“Take what you like, give what you can” has been the catch phrase of past CFKC bake sales in Charlotte. Whether $1 or $1,000, individual donations pour in and have been aided by a generous $50,000 match by Bank of America and donations from companies such as Glad, OXO and King Arthur Flour.

During the bake sale, neighboring Park Road Shopping Center business Toys and Co. will donate 10% of sales to the charity and sponsor a toy drive to replenish the toys at the Levine Children’s Hospital’s Hematology-Oncology Department clinic. 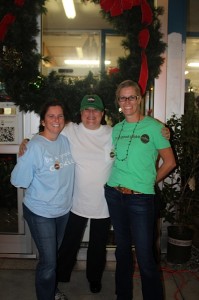 More than 50 professional bakeries in the city will contribute sweet and gooey goodies to the bake sale. Alongside will be 100 volunteer bakers who will be in their kitchens the night before baking cookies and thinking about what can be done from keeping children – their own, their friend’s own, their future grandchildren – from getting and having to fight cancer.

They are good cookies, those bakers and volunteers and their efforts show that a bake sale that last year raised $205,000 is about so much more than sweets. It’s about good cookies – people who stop long enough to think about the horror of “what if it were me and my child” and jump in.

Lesa Helbein, a CFKC advocate and fundraiser and mom, met the Christenburys at First Presbyterian Church weekday school seven years ago. Sitting across the preschool’s pint-sized lunch table all those years ago Lesa couldn’t help but notice Grier’s deep dimples dangling below the roundest chocolate-brown eyes.

“I was amazed that Amy, in between the clinic visits and the hospital stays, started fundraising for pediatric cancer,” Lesa says. 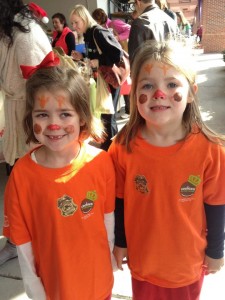 That’s because the Christenburys, like other families with a child battling cancer, soon learned that less than 3% of the National Cancer Institute’s budget is allocated to pediatric cancer. There have been very few new treatments for pediatric cancer since the 1980s, which means those young children’s bodies must withstand the toxic treatments created for adults fighting cancer. Every day 50 new families receive the same news, “your child has cancer.”

“We’re all so busy that people don’t stop to see what need to be done,” says Lesa, who decided six years ago to get behind a cause so important to all parents. “I thought, hell, I can put on a bake sale.”

What started as a few preschool moms banding together to do something for a child fighting cancer has grown into a city-wide movement to make people aware that pediatric cancer steals more years of a precious loved-one’s life than the better publicized push for breast cancer and prostate cancer awareness.

For Lesa, the initial urge she felt at the preschool lunch table eventually led to participating in a CureSearch Walk in 2008.

“They got all the kids on stage and the kids got awards for being so strong,” Lesa says. “On the other side of the lake were the families who had lost their children. They all had balloons that they let go. It was that moment watching the balloon going up in the air and thinking what it must be like to not know what side of that lake you’d be 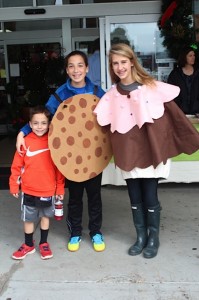 on in the years to come?”

Toys & Co in Park Road Shopping Center will donate 10% of sales on December 6-8 to CharlotteGoodCookies.com. 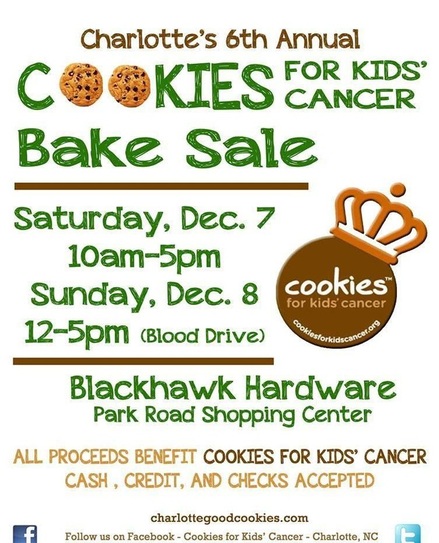 Is Anyone Else in the Pre-Thanksgiving-Christmas-Spirit?

Smarty Alert: The Smarty Party will be in...