Home Parenting Enough is Enough
ParentingThings To Do 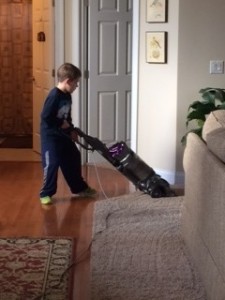 Each year I tell myself that I’m doing Christmas different. I’m going to stop myself from going hog-wild on my kids because that’s not the real meaning of Christmas. I’m going to make more family traditions to get the kids excited about the things we do as a family, instead of what they are opening. But then we start shopping and we find ourselves wrapping an obscene amount of gifts on Christmas Eve. I’m not sure what 3 year old needs to open 15 gifts from their parents, on top of the ones sent from relatives. It’s disgusting really.

But last year was the icing on the cake. My 6-year-old son was a complete selfish and spoiled brat. It all starts with the Christmas list that is a mile long and includes every expensive electronic known to mankind. The amount of man-hours that were spent picking out the perfect gifts, wrapping them just right.. all lead to an event that makes every parent’s blood boil. We sit back with excitement, only to watch him rip apart each gift in record time and then ask, “what’s next?” or my favorite, “Is that it?” He could barely sit and watch someone else open a gift because he was already thinking of his next adventure. Me. Me. Me. My husband and I tried to contain our anger that morning, not allowing him to ruin the day for us. But inside, our blood was boiling.

“Just slow down buddy.” We would tell him over and over. But the rest of the morning continued in the manner. As soon as he is done, he runs upstairs with barely a “Thank You” and we don’t see him until the next day.

It got so bad at one point last year that I told him that he would be returning a gift that we purchased for him the day after Christmas because of how badly he had acted. No interest in the rest of the family.. just what was on his own plate. The tears at the Toy Store the next day brought all kinds of looks my way. But I was sticking to my guns. He was going to understand that Christmas is not all about him. Maybe my husband and I were to blame for the crossroads we were at with my son. What missteps had we taken along the years to produce this animal? My friends would tell me that it’s just his age. Nope. Not on my watch. Enough is enough.

So as we head into the middle of November, things are looking much different here in our house. There are no Christmas lists or toy catalogs circled lying around our house. He has been told to pick one thing he would like to receive this year and that’s it. The rest of the season will be focused on others. 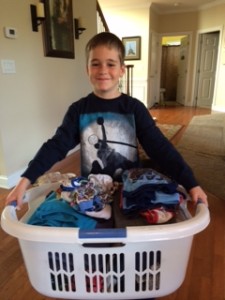 Our family does quite a bit of forced charity throughout the year so we are sticking to those close around us. Each day he is able to pick from a list of 15 chores all ranging in payment between 25-75 cents. As soon as he gets off the bus, he works through his list and hits 10-12 before tiring out. He runs the vacuum, cleans bathrooms sinks, unloads the dishwasher, and takes out the trash.. even cleans out my car. I feel like a bit of a militant watching over him but I feel good about paying him a couple of bucks a day.

His hard earned money goes into a jar in the kitchen and he glows with excitement. This year he will be selecting gifts for his family member that he will purchase himself. None of this browsing through Target and picking up coffee mugs for everyone. He is really thinking about what someone would like. And for some lucky people in the family he will be making gifts. My son, who hates art, will be making gifts for people like his Grandma because he knows that is what she wants. I LOVE IT.

Currently he is saving up for a pair of new running earphones for Daddy since he likes to run. My guess is that it will be the best thing my husband opens this year because it was earned the old fashioned way.

And what Mom doesn’t enjoy having a little help around the house while maybe teaching a very valuable lesson. Poor kid doesn’t realize these chores are his permanently. 😉

Keeping the Sport of Cheerleading Safe

This is AWESOME!!! I applaud you for having the backbone to see this through. THIS is the true spirit of Christmas: the joy is in the giving.

I love this Erin! Thanks for bringing us back to reality, the true meaning of Christmas…