Home Activities Camp Harrison’s “Mom and Me Weekend” acclimates kids – and parents! – to camp life
ActivitiesCampsParentingThings To Do

Camp Harrison’s “Mom and Me Weekend” acclimates kids – and parents! – to camp life

When we signed up for a Mom and Me weekend at YMCA’s Camp Harrison, I thought it was to get my 6-year-old son ready for camp. Wade is registered for a three-night mini-camp later in the summer, and that will be the first time he’s been away from home for more than say, a night at his grandmother’s house. 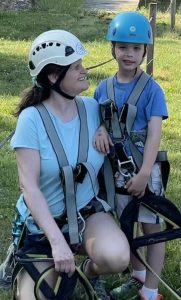 Wade and me after turns on the zipline!

But only after we got home after our weekend, and I was poring over pictures and videos of all the amazing fun we had, did it hit me: I think the experience was more about me getting ready to send him to camp.

As I watched a video clip of Wade going down a zipline, I marveled at his bravery as he stepped right off the platform and glided along a lush mountain landscape, getting smaller and smaller in my view.  I also realized that he never looked back.

From the minute we set foot on the beautiful Herring Ridge campus in Boomer, N.C., Wade was excited. He couldn’t wait to get to the cabin and pick his bunk. He waved a quiet but confident hello to a boy his age in line at the cafeteria for dinner. And at the pool party after dinner, he swam away, without asking for permission or approval, and marched up to the tallest, curviest water slide and emerged a few moments and a splash later, smiling from ear-to-ear.

Later that night, he sneaked out of bed to stargaze with his new cabinmate and instant friend Bennett, also a 6-year-old, also from Charlotte. Sitting in camp chairs outside the cabin with my sister, I was a little (ahem) surprised to see him. But I had to shrug my shoulders. It was almost 10 p.m. – as late as he has ever stayed up – but he was having too much fun for me to stand in his way. Besides, he can’t see the stars in Charlotte like you can in such a vivid mountain sky. 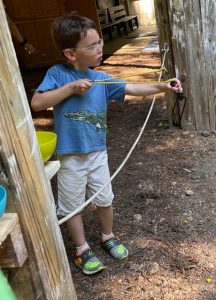 Wade trying out a slingshot.

Early the next morning, Wade told me it was going to be the best day ever. He already knew. And he was right.

He started the day on the zipline. Then he proceeded to ride a horse for the first time, shoot his first bow and arrow, BB gun and a slingshot on the target range, play hide-n-seek in the indoor/outdoor Billy Graham chapel with his younger brothers and Bennett, make a cat out of Perler beads at arts and crafts, and then top off the afternoon with another spin on the curvy slides at the pool. The day ended with him line dancing on stage at the pavilion during a S’mores and singalong party.

Granted, as much fun as Wade had, it felt like he still needed me from time to time. He had a momentary tummy ache after lunch when I could give him some comfort. I felt a tap on my shoulder one night after he tumbled out of the bottom bunk. (I think we’ll do the top bunk for camp, which has built-in guard rails!)

I still had to chase him down with sunblock and his water bottle, and I have a hard time imagining him keeping up with all of his stuff without me there. But I got reassurance from my sister, who had joined us for more of a “Mom, Aunt and Me” weekend to help take care of my 4-year-old twin sons there too. (Might as well groom them a little too!) After watching 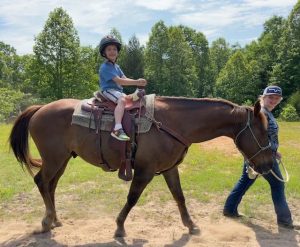 Wade in action our first night, she said: “He’s going to be fine here.”

I got so much peace just from being there and getting the lay of the land. I can picture where he’ll be and what he’ll be doing. And I got a lot of the nitty gritty mama details that you can’t find in a camp brochure: the cabin bathrooms have just been renovated, complete with overhead shower heads and new tile – way nicer than any bathrooms I had at camp back in the day!

The cabins are air-conditioned. There are clothes lines behind the cabins for wet towels and bathing suits. The cafeteria has an ice machine where kids can refill their water bottles all day long. And oh yes, every staff member we came across was super nice, helpful and had such a great way about them with the kids. 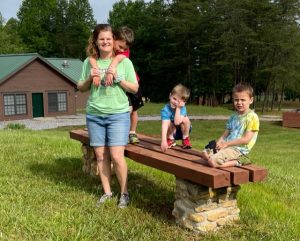 So rather than worrying about how Wade will do, I can focus on things like what we’re going to pack and ordering nametags for all his belongings. The camp sent my contact information to other parents with children from Charlotte who are going the same week as Wade, and playdates are on the books.

The night we got back from Boomer I found Wade writing “I love Camp Harrison” on a chalkboard easel. The next day he took a picture he’d made in Arts and Crafts of him ziplining for show-n-tell at school. Since then, he’s been asking me how many days until he gets to go back.

Wade is ready. I’m getting there too.

Where campers build character, develop confidence and grow in their faith.

Have you mapped out your kids’ summer yet? Check out the tried and true Smarty Summer Camp Guide!

Smarty Scoop on Weekend Activities: May 6 –...

Summer safety and fun in the pool