A year into the pandemic, we’re way past the sign-in the-yard drive-by for kids’ birthdays. Been there. Done that. Some of you are even coming up on your child’s second birthday since “lockdowns” and “social distance” became part of our vernacular. What now?

I was scratching my head last month with my son Wade approaching his 5th birthday. The past couple of years we’ve followed a teacher’s recommendation and hosted three friends for his third birthday and four for his fourth. But even inviting five friends to a small birthday party, which has to be indoors in February, was not going to work in a preschool setting. Five friends from his class weren’t a problem. But their parents? Tricky.

Last fall, we had a Big Air Trampoline Park birthday party when our twin sons turned 3. That worked out great. But once cold weather and holidays came, and COVID numbers spiked, our preschool got stricter with its guidelines. If we wanted to socialize with a group of parents indoors, even masked, it would require a quarantine on the back end. (I love ya, buddy, but I need you in school when you can be!)

I racked my brain for ways we could make Wade’s day special without a party or even a big gathering of relatives. The idea of the North Carolina Museum of Natural Sciences in Raleigh popped into my head. Wade loves dinosaurs. Getting a look at his first set of dinosaur bones would bring a smile to his face – even if it was “only” with his mom, dad and brothers. Plus, masking up and touring the museum on our own would pass COVID protocols.

I figured making a day trip out of it would make it an adventure, and it did. We had a blast!

I’d never been to the N.C. Museum of Natural Sciences before but had heard good things from friends and family who live in the Triangle. It worked out great. For a 5-year-old and two 3-year-olds, the museum was not only a destination, but a place with some space and freedom to roam around. They boys could leave my side and explore a little bit without my feeling like they’d get lost at every turn.

The “dinosaur bones” did not disappoint, starting with a glimpse of “Willo” the Thescelosaurus, an upright-running herbivore. Our boys got a real sense of how big these creatures were when they took a jaw-dropping look up at the skeleton of the 40-foot long Acrocanthosaurus, or “Terror of the South,” in the three-storied glass-topped Acro Dome. 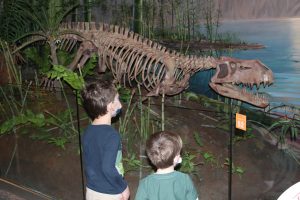 There was plenty more to see in four stories of both natural exhibits and live animal displays, whether it was the expanse of a 54-foot-long set of sperm whale bones, a sea turtle trying to “chase” some fast-moving fish nearby for dinner, or snakes coiled and camouflaged in the safety of encased glass. The whole experience got us a closer look at some of North Carolina’s most amazing wildlife without getting dirty, muddy, smelly, or having to hold anything slimy (I see you, boy moms.) 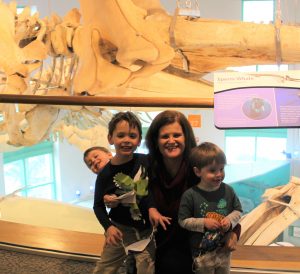 Admission is free (Bonus!!) and reserved, timed tickets aren’t necessary anymore. The museum limits the number of visitors in the building at any given time, but for us, on a Friday morning, it wasn’t an issue.

The 3D theatre is closed during COVID and only one of the two cafes was open, but it didn’t matter. Our kids had a blast just riding the escalator from one floor to the next. We had a really good lunch at the New Planet Café right there in the museum. Prices were surprisingly reasonable, which my husband theorized was to attract downtown businesspeople. The menu had plenty to choose from, and it was delicious. Grilled cheese, burger and chicken fingers for the kids, chicken salad wrap and hamburger for mom and dad.

Getting to downtown Raleigh made for a three-hour car trip – if you throw in a couple of potty and Starbucks stops – but we made it out of the house by 8 a.m. and were home by 5 p.m. We got to see all we wanted at the museum, never felt rushed and still made it home in plenty of time for a birthday dinner with my mom and a normal bedtime routine.

I already know we’ll head back for the new “Dueling Dinosaur” exhibit which is scheduled to open next summer. The unprecedented exhibit will feature fossils of a Tyrannosaurus rex and Triceratops found buried together in a Montana hillside. The display will literally be a work in progress, where visitors can watch paleontologists remove fossils from sediment. Count us in!

If you’d rather stay local, Discovery Place offers plenty of kid-friendly options here in Charlotte too, whether it’s Discovery Place Science uptown, Discovery Place Nature or Discovery Place Kids in Huntersville. The NASCAR Hall of Fame is another spot on our need-a-change-of-scenery list too. This is a great time of year to visit museums before the weather warms up, schools let out, camps start and you’ve got a lot more choices. 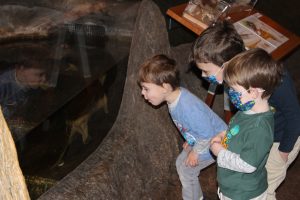 From the Smarty Health Corner & Novant Health: Why the Mediterranean diet is so popular. And smart. {recipes included}

Polly Pocket is a Punk