Confessions of a self-isolating toddler mom

It’s been more than a month since the phrase “stay-at-home mom” became literal.

All my e-mail attachments about virtual story times and music classes, craft ideas, and inventive new games are buried deep in the inbox now. They’re somewhere under the receipts from Amazon and all the company CEOs explaining how they’re responding to COVID-19.

Zoom chats with preschool classes have lost some luster. The supply of sidewalk chalk is running low, and I’m now finding kinetic sand in every bedsheet in the house. (Every new toy has its price.) Lately I’ve taken to hiding PJ Masks costumes, just for a break from helping three little boys, ages 4 and 2-year-old twins, pull them up and down every potty break.

Some of my best mom friends, who were sending funny groups texts in the beginning, are checking in with each other now. We’re commiserating, offering support and compassion. Thank God for ‘em. Hoping this blog can be a little of that for you.

Quick disclaimer, though. None of this is complaining for real. My children, my husband and I, my extended family – we are all healthy. Nobody has gotten COVID-19. As the daughter and sister of doctors, I know full well I’ve got the cushy assignment here. Let’s just call this what it is – blowing off a little steam through fingertips on a keyboard.

Anybody out there who has been decluttering your closet, repainting rooms, reading novels, and binge-watching Netflix, more power to you. You’re excused from reading the rest of this blog, if you need to get back to your workout video.

Because this one is for the survivor moms, who are doing well not to fall asleep watching the news after getting the kids to bed and then having to peel themselves off the couch to start doing things they couldn’t get to during the day – like say, the freelance work you used to do during preschool hours, the kitchen, laundry, etc.

The best advice I’ve been getting from my mom friends lately is to give yourself some grace.

For me, that means letting go of screen-time guilt or trying to anyway. And that’s a hard one.

One morning recently, I was debating putting all three of my boys in front of “Paw Patrol” after my best friend called – a rarity, during the day, and something that would normally be reserved for the drive to or from preschool. The boys were being boisterous over breakfast as she and I tried to talk, but I didn’t want to hang up. Just hearing her voice had lifted my spirits on a blah morning.

I decided rather than giving in to screen time – which I would need later to clean the kitchen – I would just let them run around for a few minutes. It might have been a minute before I heard a thud.

One of the twins, Johnny, had attempted to climb a stepstool into his twin brother Wes’ crib. Our 4-year-old, Wade, had left it there that morning. Wade loved to climb into Johnny and Wes’ cribs in the morning to hang out. I always thought it was cute. Not anymore. 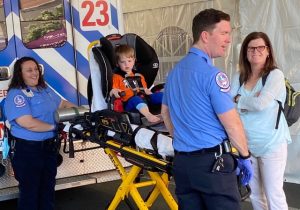 Johnny and I were greeted at the ambulance bay by my sister, a local OB-gyn, who gave us a big lift of moral support to go along with the good news we got shortly thereafter that all was OK.

Johnny didn’t bounce back like he usually did after a fall. He was lethargic, acting like he wanted to fall asleep, and within a few minutes started vomiting. I knew it was serious. I called the pediatrician’s office. They told me to call 911. Next thing you know Johnny and I were in the back of an ambulance heading to the ER.

He checked out OK at the hospital – no skull fracture, no signs of bleeding, no CT Scan needed – and felt much better by the time we left. Our pediatrician thinks he suffered a concussion, so we made our best attempt at laying low for a couple of days before we got back to swing sets and riding toys. Thank God for hard heads, grandmothers who live a mile away, and mulligans for mamas.

I still carry some guilt for that one. I don’t, however, feel guilty anymore about my daily run to the Starbucks drive-through. It keeps me sane – my little party in a cup. And even the boys seem to like having a reason to get in the car and go for a ride: cake pops!

Some days grace, for me, means forgiving myself for an outburst at Wade. At 4, he knows how to push my buttons. But I’ve learned I can turn the day back around in an instant if I just find a way to get myself right again. The other day I got there by making my bed. It was 3:30 in the afternoon, but it immediately made me feel better. Then I went to Wade’s room and apologized. I hid my tears in his sweet hug. He gives me grace even when I struggle to do it myself.

Sometimes the best way to keep from losing my mind is texting a mom friend. She will get it, and if nothing else, she will make you laugh. 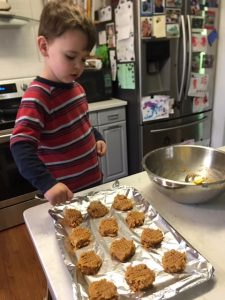 One of my go-to mom friends texted me the other day that she had finally hit the wall trying to homeschool her two middle school boys. She was pouring herself a glass of wine at 4:17 in the afternoon. She was on her second glass when she texted again an hour later. I tried to make her feel better with my response.

“I just let the boys watch Paw Patrol while I thawed something frozen in a bag for supper. LOL. Attempt at plastic egg craft now has resulted in mess. TV is so much cleaner.”

She wrote: “Yup. Totally get it. Lower expectations. TV is totally fine. No crafts.”

Nothing like a belly laugh to get you through the afternoon.

For me, sheltering at home is about surviving the days, measuring the good times in cuddles and hugs, and counting small victories when they come. Wade is learning to ride a bike. Johnny can now peddle a tricycle. Wes has gotten so good on the potty that I’ll let him wear a costume like his brothers. 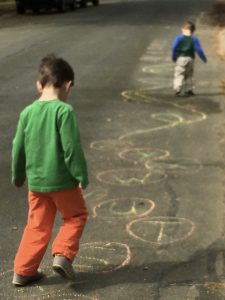 Some of our best times have been spontaneous ones. Doing hopscotch and frog jumps on our next-door neighbor’s “sensory sidewalk.” Blowing dandelions. Letting everybody run loose on the greenway. Cooking out.

Gratefully, there’s only been the one 911 call (fingers crossed!) And oh yeah, the one video chat with the pediatrician for a flying object to an eye. The dishes eventually get done. And some days, I even say yes to the P.J. Mask costumes. And I’ll let the boys wear them all day. 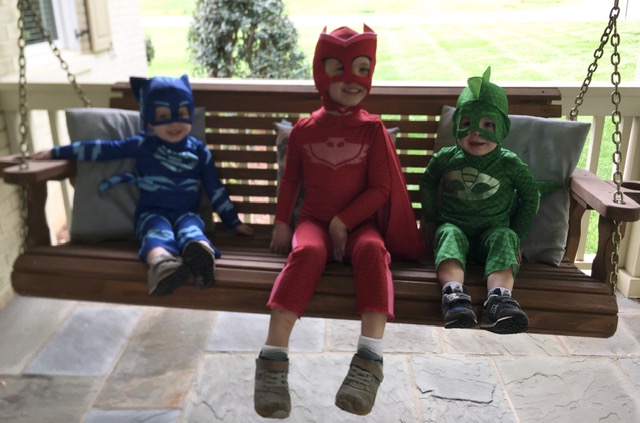 Smarty School: (Week 3) STEAM activities with Digibridge: In the Garden

Tips for Traveling with Children

So, Do You Think Your Child Could be...

In Carroll, Wow, how the boys have grown since the last I saw them. Kudos to you! Yes your mom is wonderful. Tell Wade I said hello. Hang in there.