Join the Move for Jenn Foundation on November 2nd for its 1st Annual Pajamas All Day 5K Run/Walk! Roll out of bed and bring the whole family for a fun-filled morning of MOVING! The Move for Jenn Foundation was founded by local mom Jenn Andrews. Click here to read her inspiring story of overcoming cancer and choosing to MOVE. She continues to inspire us daily in local road races, in barre classes, OrangeTheory, and just doing life with her sweet family.

This must-do event will have a great 5k course that starts in the Blakeney Professional Park in Ballantyne, live band and DJ, sponsor expo, food vendors, children’s fun run and activities, full petting zoo, adult DIY booth, mimosas, raffles and more! Feel free to bring your cash/card so you can join in on the extra fun. It’ll be such a fun morning of moving together as a community!

More on the Move For Jenn Foundation

The mission of the Move For Jenn Foundation is to offer grants to sarcoma researchers and those who have suffered the loss of a limb to sarcoma and other affiliated diseases. The foundation’s goal is to raise awareness of the disease through fundraising events, while also helping amputees afford or obtain an active-wear prosthetic.

15-20% of all childhood cancers are sarcomas
13,000 new sarcoma cases are diagnosed each year
5,000 people die each year from sarcoma

Click here for registration and registration fees.
T-shirts are guaranteed to anyone who registers by Friday, October 25.

More about Jenn & Miles Andrews, founders of the Move for Jenn Foundation: 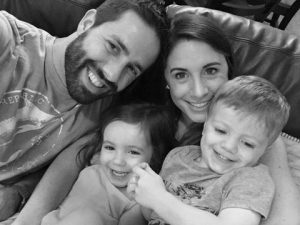 Post-delivery of her second child, she was scanned and biopsied, only to show the mass was benign. Surgery to remove the mass was still recommended due to the size and location of the mass. On December 3, 2014, the mass was removed. Pathology went on to prove that this benign cyst was actually not benign, but a low-grade myxoid sarcoma. Due to the location, a second surgery to ensure clean margins was not an option, so she chose to be watched.

She went on to have scans of her right foot and lungs as recommended for the next 3 years. She remained clear until January 2, 2018, when scans revealed cancer had returned as a thin layer on top of her entire right foot. After seeking multiple opinions, amputation was the only option to give her the best chance at a cancer-free life.

On March 7, 2018, Jenn did a Facebook live video requesting friends and family to move for her and those who physically can’t on her surgery date. This request unknowingly became a movement. So, on March 12, 2018, Jenn became cancer free, and the social media world flooded with #moveforjenn and #movebecauseyoucan posts globally. People all over the world were sharing posts with all forms of exercise in honor of Jenn and her request. This movement led her to realize that being an amputee, and someone who wanted to remain active, would be difficult without ample means of funding. Most insurance providers will only cover one prosthetic per person, if that.

Jenn’s mission of helping other sarcoma amputees was born when she and her husband, Miles realized the financial burden of being a young, and active amputee. Everyone should have the right to be active and/or run. Child or adult. Jenn and Miles plan to help ease that financial burden for as many individuals as they can.

Home for the Holidays