I’d thought we’d been pretty crafty with the way we use Amazon Echos in our household, but that was before I found out what moms like Cambrie Anderson are doing. Anderson, a fellow twin mom I met through the Charlotte Mothers of Multiples Club, has been using “Alexa” to help get her three kids ready for school in the mornings. Genius, right? 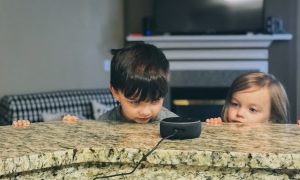 Alexa is set up to repeat each “request” once and so far, Anderson said, that’s been enough. By the time her twins go to the potty and heed the prompt to “Get water and backpacks and wait by the door,” she has woken up her 1-year-old, Axl, and is ready to meet them at the door. No nag-fest needed.

“I would be a lot more frazzled,” she said. “I’d be running around like my head was cut off. ‘Don’t forget this and don’t forget this.’ Telling my kids to go pee and wash their hands and get backpacks.”

When she was telling me this, Cambrie stopped to point out that in the grand scheme, she realizes issues in morning routines aren’t that big of a deal. Yes, we know, it’s not life and death. But as fellow moms, we totally understand how revolutionary it can feel to shave time and stress off getting three children out the door. And it’s important in its own way for parents and children alike to start the day in a low-stress environment.

Moms like Cambrie – and most twin moms, sheerly out of necessity – are already doing everything possible the night before school: laying out clothes, packing lunches, having breakfast ready to prep. But this is a way to save time in the real-time flow of the morning routine.

“It’s like you have a personal assistant almost, which seems silly, but I don’t have to stress about yelling at them,” Anderson said. “(Normally) when you tell them something, you have to repeat yourself 37,000 times and then you get angry because they don’t listen and it takes five minutes for them to do something that should take 15 seconds. But for some reason, they listen to Alexa and they’re like, ‘Oh that’s what she said to do, let’s do it.’” 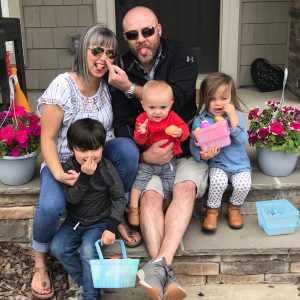 Granted, this artificial intelligence won’t work the same way on teenagers, who know full well Alexa is not some mysterious person trapped inside a small, black cylindrical device. But maybe we shouldn’t rule it out either.

I can visualize using Alexa to “drop in” on an Echo Dot in a teenager’s bedroom to wake him up for the fifth time, without getting all the grumbling and eye-rolling in return.

Right now, in our household, we are just scratching the surface with what Alexa can do. We gave Echo Dots in each of our son’s bedrooms (ages 3 ½, almost 2 and almost 2) and use them for things like playing bedtime lullabies and frog sounds, which serve as white noise.

I use Alexa, which we also have in our kitchen, to set a time-out timer or to give my 3-year-old two more minutes on the iPad. I use it to play music or set cook timers, when my hands are full or messy. I ask Alexa for the weather when I’m trying to figure out what to wear or how to dress my boys. I’ll ask her what time the Atlanta Braves play or have her play songs by Adele, when I want to fade away for a few minutes.

My 3-year-old can find his favorite music himself, even though his request comes out sounding like “D’Alexa….play nursery rhyme party time.” And my twins, who turn 2 in early October, are already learning how to say: “Deda….off.”

If you’re like me, you didn’t have any intention of buying an Echo, but your husband got one. Or if you’re like Cambrie, they were on sale on Amazon Prime Day so you figured what the heck.

You think you won’t use them much, but you’d be surprised! And with Christmas not too far off, keep them in mind for gift ideas either for somebody else or as a suggestion for yourself…. that is, if you can hold out that long. 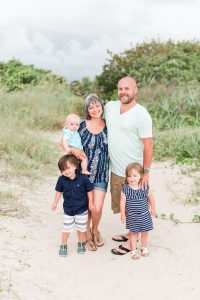 If only every day could be measured in...