A mama owl and a Mother’s Day miracle

“What’s the deal with the owl?”

That’s the text message I got from my next door neighbor shortly after 8 o’clock one recent morning. She had walked outside to take her trash out only to be met with the piercing gaze of the barred owl camped out in a basket nailed to an oak tree in our backyard.

The small white plastic basket is only about nine feet up the tree, so it’s jarring to get that kind of eye-to-eye lockup with an animal you usually only hear from 40 or 50 feet above. I know. I’ve been meeting her gaze through my kitchen window for more than a week now. That’s Mama Matilda.

That’s what I dubbed her a couple of days after my husband rescued one of her owlets who had fallen from a nest high in the tree. I might not even have noticed the fuzzy white owlet stirring in the mulch beneath the tree but he walked through the door after work that day in a frenzy. 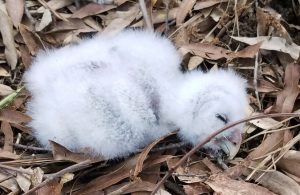 By the time our three young sons had finished their dinner and our 18-month-old twins were in bed, Gus had the owlet in a T-shirt lined shoebox, a call in to the Carolina Raptor Center, and a crew of firemen on the way to do what we didn’t have a ladder tall enough to do – put that owlet back up in the nest.

Captain Ed Henderson from Station 12 told my husband over the phone he would come check it out. He did about 10 seconds’ worth of checking before he had his crew unload their 40-foot ladder. Three other firemen spotted him at the base of the ladder, but it was Captain Ed Henderson himself, who climbed to the top where he came eye to eye with Matilda.

“Uh oh, Mama’s home,” he said, peering down at us, holding the owlet in a shoebox. He knew full well the havoc she could wreak with her sharp talons.

He asked my husband to call the Raptor Center back and ask how to tell if she was in an aggressive mood. She was clicking her beak and squawking like crazy. The Raptor Center assured us if she wasn’t ruffling her feathers she wasn’t looking for a fight. So Captain Henderson showed her a glimpse of the owlet, and while she retreated to the back of the nest, either in peace or in fear, he placed her owlet back in the nest. 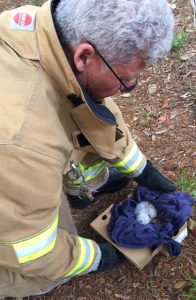 It was an incredible gesture for those Station 12 firemen to come out to our house and pull off that kind of rescue in front of my already firetruck-worshipping, owl-loving 3-year-old son. 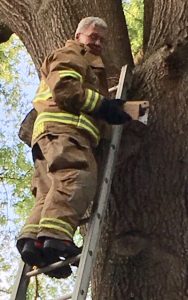 It was like a children’s book playing out in my backyard and that’s where it should have ended. But in real life, my husband found another owlet the next day, this one even smaller than the first. (We learned that owlets are hatched days apart, so they aren’t the exact same age. We also learned they are a little like toddlers; they love to jump and explore but don’t know understand their bounds.)

We knew taxpayer dollars and our first responders had already done more than their share. So my husband called the Raptor Center back and got Plan B: if he could nail a small laundry basket at least seven feet high in the tree, the owlet would be safe from predators and maybe, just maybe, his mama would come feed him. 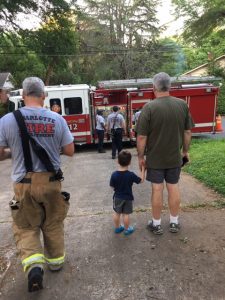 We woke the next morning to find Matilda perched in that little basket, where she has been camped out morning, noon and night every day since. If she’s not warming or feeding her owlet, we can usually find her keeping a watchful eye from a higher branch on a nearby tree.    Amazing, right? And none of that is what I’m referring to with the Mother’s Day miracle mentioned in the title of this blog.

The same evening my husband made our makeshift owl’s nest, I got a text from my best friend here in Charlotte telling me she was admitted to the hospital. At 24 weeks pregnant, she had ruptured membranes. She wasn’t due until August. 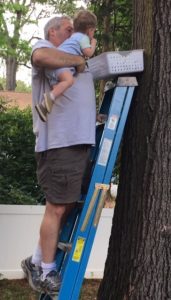 We’d just been chatting so casually the afternoon before, watching our 3-year-olds climb a dirt pile at a construction site in our neighborhood, her daughter and my son. She’d just sent me a photo of a quilt she’d bought to start decorating the nursery for her first son.

Now his outlook was dire. Having gone through two pregnancies with a sister who’s an obstetrician I know the 28-week milestone well. That’s when they use words like “viable.” Any baby born before that is at risk for serious disabilities and worse.

Over the next week, while I watched Mama Matilda through my kitchen window, I got updates via text as my friend fought for her son’s life while bedridden at Novant Presbyterian. She made it through multiple steroid shots, checked off critical 12-hour increments, fought back fear and frustration that were compounded by little to no sleep. And even after her water broke, she made it four more days, clearing the 25-week milestone we’d all been praying for. An infection finally forced her son’s birth via emergency C-section a week and a day into the ordeal.

He was born at 1 pound, 13 ounces….and with a fighting chance.

The morning after his 4:35 a.m. birth, she texted me a photo. It was hard to make out much except arms, legs, and tubes. You couldn’t see much of his face because of the ventilator he was hooked up to and a hat held in place by safety pins that looked so big next to his tiny little features.

At first glance, I hadn’t even noticed that my friend, his mama, was in the photo. Her face blends into the glare of the incubator glass. But there she was lying in a bed that had been wheeled up next to his incubator, wearing a hospital gown, glasses and a smile.

She wasn’t looking at the tubes. She was looking at her baby. And in that moment, I didn’t see fear or fatigue – I saw love.

I asked if she’d been able to hold him. “No,” she texted. “Probably can’t hold him for another week.”

Before I had a chance to respond, she texted again.

The words were as beautiful as the photo. After all this mama had endured over the previous week, she was willing to sacrifice more.

This Mother’s Day, she and Matilda have reminded me so poignantly of the power of motherhood, the perseverance and strength it requires and the capacity for love it creates.

Happy belated Mother’s Day, y’all. What a gift it is to be a mom.

Fitness Friday from Title Boxing Club: How to...

I love both of these stories – written so beautifully. Thank you for sharing. Prayers for this precious baby boy and his mama… Matilda & her owlets too!