Three years and three sons into life as a parent, I’ve just been introduced to a crazy new phenomenon called moving with children. 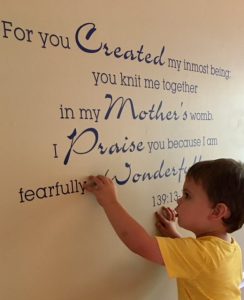 Wade helps me through a bittersweet moment, taking down the Psalm 139 decal in his room at our old house.

When I was pregnant with my first, a good friend told me that once you become a parent, trying to get something done feels like you’re wearing an anvil around your neck. He and I both have three children now, so by extrapolation, I’m taking that to mean three anvils.

Just getting out the door to the car some days feels like it’s going to take every ounce of energy you’ve got, right? So trying to get everything my husband, three children and I possess packed, out the door, and into its rightful place in a new house, has been – yep, a week into it, it’s still ongoing – one of the most arduous tasks of my life.

We weren’t even planning to move. After my husband and I had twin boys last October, we talked about adding onto our house, but the cost didn’t seem to match the benefit. Last month a house just down the street from us came on the market. It had been renovated, had a fourth bedroom, a play room, and a fenced-in backyard and would allow us to stay in the same neighborhood with my mom and sister. (Yes, we have an awesome setup.) Within minutes of walking into the new house, my husband and I knew this was it.

In a matter of 12 hours – after we had to outbid another buyer – the house was ours. Then, reality set in! We were going to have to move. And do it fast. One way we won the bid was to offer an early closing date. 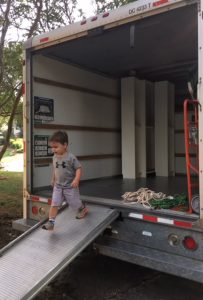 Wade having some fun traipsing around the moving truck.

To save money – and because it seemed like we could almost walk our stuff down the street – we decided to do the move ourselves. My husband was willing to do the heavy lifting if I did the packing. We’re still doing both. I won’t lie; it’s been pretty insane. Moving always is, but with kids in play, what might normally take you three days takes about three weeks.

As I type this, I’m sitting at my desk in our old house, where our wireless and cable are still active because I have not yet moved the desk, my computer and our internet to the new house. Hey, at least it’s quiet?

It’s funny how your priorities change once you become a parent. My husband and I are both living out of suitcases, basically, but we are fine. As long as our boys have their clothes, diapers, food and toys in place we are good.

Our saving grace has been my mom. For the past week, my three sons and I have been staying at her house. There we all get the comfort of grandmother’s hospitality as well as the security of a safe place for a 2-year-old and two crawling 11-month olds with a propensity to go in different directions. 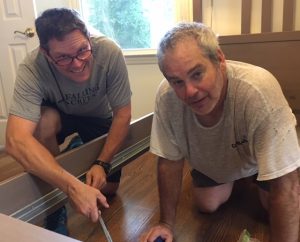 My husband Gus (right) and his best friend Andy setting up at the new house. Talk about a true friend!

My husband has been holding down the fort at the new house. After a full day at work, and coming to Mom’s to help me get the kids to bed, he spends his evenings putting things back together that we took apart for the move or that Mama has bought at Target.

While my mom or our nanny helps with the twins, my 2-year-old has been coming with me to the new house to lay shelf paper and unpack kitchen boxes, or work puzzles and climb step ladders, depending on your perspective! As a stay-at-home mom, I’ve been spending the boys’ afternoon naps packing things up at the old house and evenings, after bedtime, unpacking them at the new house. Tonight is my respite to blog. 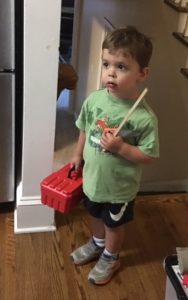 Wade, with tool box in hand, ready to fix up the new house.

After living in a nomadic fog for a week, the one recurring thought I’ve had is that moving children is a lot like bearing them: it’s painful, lasts entirely too long, and is better with medication (I assume, LOL!) I’ll eventually forget what this move felt like, and I’ll just be glad I did it.

In the meantime, I’ve also learned that minivans are awesome for moving. Take the stroller out, lower the third row, and you can load that bad boy up with just about anything. A hurricane chocolate stash comes in handy during a move. And your real friends still show up to help you move, only it means even more because it’s for your children now too.

How to Keep Your Kids Lice Free this School Year