It’s the perfect week to pick up a dozen fresh donuts for the family at Dunkin’ Donuts and support an amazing local organization. From May 13- 19, Charlotte metro Dunkin’ Donuts will donate 50 cents to the Bring It 4 Braylon Foundation for each Dunkin’ Donuts limited-edition, Braylon-inspired donut sold.

Braylon Beam is a nine-year-old brain cancer survivor who captured the nation’s hearts with his Ellen DeGeneres Show appearance and dancing-as-therapy videos promoting his #JustKeepDancing campaign. You might remember when he signed a one-day contract to coach the Panthers during Fan Fest. Braylon and the foundation named for him exudes positivity and support for all of those battling pediatric cancer. 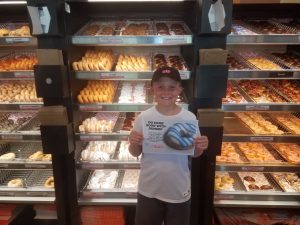 The Charlotte Dunkin’ Donuts started the donut fundraising campaign in May 2017 in honor of Braylon, and during National Brain Tumor Awareness Month, garnered almost $10,000 for the foundation.

Jesse Beam, Braylon’s dad, said “Partnering with the local Dunkin’ Donuts again means that even more families who have a child battling cancer can enjoy some quality time together and financial relief during a very trying time. That’s because our foundation provides gas cards, groceries, trips and other gifts to the families. With Braylon’s fun-loving personality, it only makes sense to do a fundraiser around something like DONUTS!”

The First Tee of Greater Charlotte Event: The Champions Challenge

Some CSP posts you CAN’T miss this week!