Home Health Invisible Fence® Brand: The fence that is saving our lives (and our pup’s!) – Smarty Steal included!
HealthParentingpetsThings To Do

Invisible Fence® Brand: The fence that is saving our lives (and our pup’s!) – Smarty Steal included! 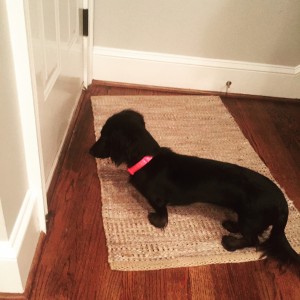 Daisy: Waiting to make a run for it

It’s 5:30 pm. Dusk. The kids are doing their thing – waltzing in and out of the house with neighborhood friends, and I’m making dinner. Then, suddenly, SHE escapes. Our 10-month-old miniature dachshund, Daisy. She careens right out of the side door with the kids and BOLTS for the neighbor’s yard.

We run. She runs.

We run further. She runs even further.

We scream. She runs.

We leap for her. She leaps for a leaf blowing in the wind.

We slip on a muddy hill. She runs likes a gazelle.

She’s a squirrel. And she’s headed right for a MAJOR Charlotte thoroughfare at rush hour.

Finally, she STOPS to do her bizzzzness, and her life is saved. We grab her. She’s five houses away and dangerously close to death by car, but we bring her home safe and sound. My voice is gone. I’m sure someone has recorded the entire thing, and we’re already viral on the NextDoor Neighbors app. The neighbor kid probably needs therapy.

That was the scene at my house last month with my kids and new-ish puppy.

It was the scene that proved it all: our li’l hot dog puppy had TOTALLY rocked our world. We were completely thrown by a dog that’s a “runner.” Our first dog, Mollie, was like a cat. She hated to leave the house let alone let us chase her for miles. (She passed away last year, and after waiting a few months, our family decided that we are most definitely dog people, so…that’s where the puppy comes in.)

She’s been different in so many ways from Mollie (or maybe it’s that I was only 23 with no kids when I got Mollie and now I’m {ehem} with four kids, a job, and a house to run). She’s smart as a whip (Mollie was smart, too, but DANG, I think Daisy might be able to pass the SATs), but not smart enough to know moving car + tire = death.

Something had to be done. I couldn’t go another day, another play date, another multi-tasking-homework- play-outside-dinner-bath-bed night wondering if she’d squirrel her way out the side door (our back yard was fenced – it’s the front and side yards that were free range!).

I talked to a few friends and they all recommended one thing: 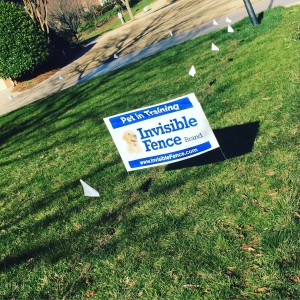 I called Invisible Fence Brand IMMEDIATELY and set up a consultation. Those guys could NOT be any nicer. They were out within days to give me an idea of the job and an estimate. (Honestly, I was sold right after I talked to friends who had raved about it – I just needed it installed and Daisy trained as soon as possible.) We opted for Invisible Fence Brand’s Boundary Plus ® around the perimeter of our entire yard (those doxies are diggers – it prevents her from digging a hole to China under the fence) and training sessions because, let’s face it, Daisy NEEDED training. 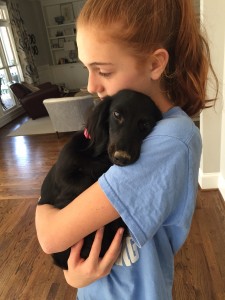 See that nose? She’s a digger!

The Invisible Fence Brand system was installed in just a few hours on a Friday morning (um, the installer, Chuck, was WICKED with throwing flags – he needs to enter a flag-throwing competition), and by the next week we had our first training session with Jon. By the end of that first training session, I could tell that Daisy was well on her way to success with the system. It was AMAZING. 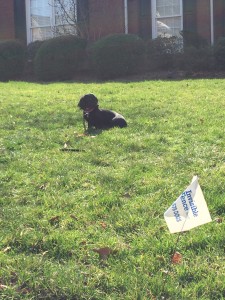 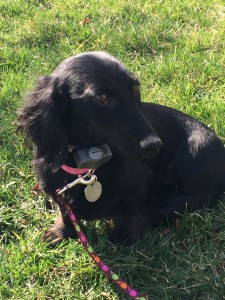 After that, Invisible Fence Brand’s dog trainer, Drew, came for a few follow-up visits to continue the training with Daisy and make sure all of the levels were right on the collar and she was adjusting well to it. He was an absolute gem – so great with dogs and SUCH an awesome resource for me. Not only did he give us tips on making sure Daisy adjusts to the Invisible Fence system, but he also answered every. single. one of my million questions about dogs (I’m like a new mom!). He’s my very own Cesar Millan on call.

I have been totally shocked about how easy the entire thing has been. From installation to training, it’s been so quick and seamless. My pulse has lowered several notches because when the kids are home and chaos ensues, I know Daisy is safe. Daisy loves it because she can play Capture the Flag and soccer with the kids in the front yard – plus, she gets her best morning sun on the front porch. (Those pesky cars keep coming, but she already knows barking is quite enough – no need to chase it down the street ;-)).

The Invisible Fence system has just made life with four kids and one dog so much calmer…so calm that we decided to go for Baby #2. 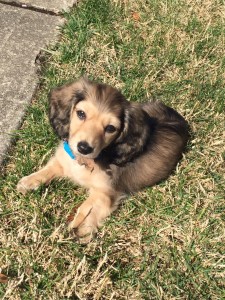 Donut has awhile before he’s Invisible Fence-trained (they tell me to wait until he’s about 4 months). Don’t worry, I’ll keep you updated. Until then, pray for me. And pour the wine.

If you’re on the fence {no pun intended} at ALL about how to keep your fur baby safe, use Invisible Fence Brand – they’re local and awesome. Trust me. It will change your life. And your pup’s!

Invisible Fence Brand is offering Smarties $150 off premium outdoor packages – it’s the PERFECT time to install and train with spring right around the corner (or should I say upon us?! :-)). Tell ’em CSP sent ya! Click here for more details. 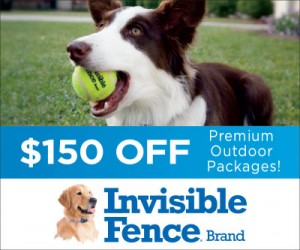 From the Smarty Health Corner and CEENTA: Know Your Doctors – Ophthalmologists

From the Smarty Health Corner: Mammograms and Breast...

From the Smarty Health Corner: Learning the value...

Sweet Ollie & Toys from the Heart

All Dad Needs Is…

From the Smarty Health Corner and CEENTA: Sleep...