The Let Me Run 5k is THIS weekend, and we thought it was the perfect opportunity to interview a couple of the volunteer high school coaches. Brice Mayeux, David Kloiber, Andrew Dautel are three high schoolers helping the head coaches of Let Me Run at St. Gabriel School. Big thanks to them for answering our questions (over EMAIL – not text – that’s big for high school boys ;-)) and an even BIGGER thanks for being great role models for all the Let Me Run participants. Go get ’em this weekend, boys! 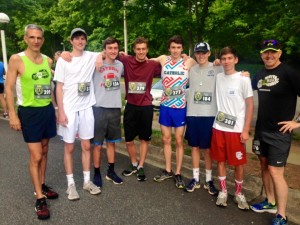 How has coaching Let Me Run enabled you to see your own coaches in a different light?
By coaching Let Me Run I now understand how hard it was for my coaches whenever we misbehaved, or did not pay attention. I also respect them more for giving their time to be with us

What advice or wisdom would you like to leave with the team?
I would like to tell the team to know how much they have improved this season and that they need to apply their ability to improve at different skills in everyday life.

What makes Let Me Run so awesome?
Let Me Run is awesome because it is a way for any kid no matter the shape, weight, speed, ethnicity, etc. to come together as a giant group and help each other complete goals in their lives.

How has coaching Let Me Run enabled you to see your own coaches in a different light?
LMR has enabled me to see how difficult it can be at times to coach and that I should always treat them respectfully even when I may not agree with their methods of coaching.

What advice or wisdom would you like to leave with the team?
I would like to tell them even if you are not the best runner right now does not mean you cannot become a great runner. There are multiple kids on my high school cross country team who have dropped their times from 21 minutes to 17:30 in just two seasons because of the effort they put into bettering themselves. To those who do not plan on running in the future, I would like to encourage them to find something they really like and do it to the best of their ability.

What makes Let Me Run so awesome?
LMR is so awesome because of the attitude the kids bring to practice each day. More times than not they are all there smiling and happy to be able to hang out with their friends and run.

What makes Let Me Run so awesome?
Let Me Run is awesome because it inspires boys to be better people and it teaches the values and traits of a healthy, happy person.

What got you interested in coaching LMR?
My friend’s mother, Kelli Dumser, has hand in this program at my elementary school and encouraged me to participate in the pilot program.

What’s been the highlight of coaching?
The highlight of coaching has really been the kids. I know that sounds cliche, but the kids have taught me so much about myself and about people in general. Everyday that I coach I really look forward seeing the kids eager eyes and smiling faces. I cherish the opportunity that the program provides me to make an impact on their physical health and moral character.

How has coaching Let Me Run enabled you to see your own coaches in a different light?
Let Me Run has allowed me to view my coaches as people.

What advice or wisdom would you like to leave with the team?
Try to be the best version of yourself that you can possibly be. 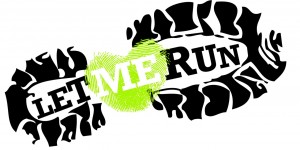 Very Surry (and a Giveaway!)

Twins and Maybe One More?