Home Parenting I’m raising a competitive athlete
ParentingThings To Do

Sometimes I wish my kids were into chess. Or band. Or robotics. But someone had other plans for them. And they involve competitive sports. 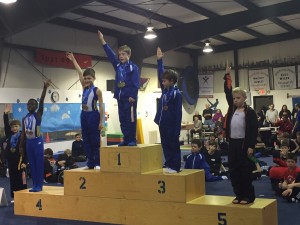 My youngest child was born to be a gymnast. When he was just 18 months old, his big sisters had a parent observation day at their tumbling class. He and his twin brother decided it would be a good idea to climb the big rope to the top of the gymnasium 18 feet up and ring a bell that was on the ceiling. When the coach came running towards them and yelled “whose babies are those?”, I thought I was going to be reported to DSS for not watching my toddler twins closely. He instead told me that they needed to be enrolled in gymnastics immediately. And so began our competitive gymnastics career.

In the early days of navigating men’s gymnastics (that’s what it’s called, even though they are boys:-), I was apprehensive to say the least. Those who know me well know that I am ALL ABOUT rec sports. I have a gaggle of kids and a full-time job, the last thing I’m interested in is driving my kids all over this state to chase a sporting dream. I’d rather spend my weekends with my family, in this amazing city enjoying sports games in the mornings and family time in the afternoons, not in a hotel room in some random town. But that was before my 4th child showed me what it means to be a true athlete and have an undeniable passion.

We didn’t just throw him into a competitive environment. We first enrolled him in the fun gymnastics classes and he quickly mastered every skill there was to offer in these early classes. I’ll be honest, I was kind of hoping he’d get it out of his system because he loved all sports, but not like he loved gymnastics. Year after year, his coach kept telling me that he was ready for “team”. I would laugh it off. Our family policy is that if you are really, really serious about a competitive sport, then you must give up all others to pursue that one sport. Three of my four quickly declined because they like many too sports to choose just one. But not my 4th, at one point he told me I was “crushing his dreams”. So I caved, signed him up for team and we are deep into our 2nd year.

What I’ve learned from my son is that he was born with this gift. He can take this as far as he wants, but it’s entirely in his hands. He is the one who gives up playing with his friends so he can be at the gym 10 hours a week. He is the one who is taking risks every single day to try and master a new skill. He is the one who consistently delivers under pressure. Is he the best? Nope, not even close, but he’s doing his personal best meet after meet. And that’s all we need to see.

This week we had our first big scare. Gymnastics is one of the most dangerous sports for kids. Our near miss was one that almost made my husband throw up as he watched it. He came home to tell me that our son was inches away from literally breaking his neck. My first reaction was to yank him out of gymnastics altogether. No sport in my mind is worth that big of a risk. I expected my son to be afraid of gymnastics moving forward, I sure know I am. But he didn’t even flinch after he dried his tears from the pain. He looked at me and said “I know exactly what I did wrong. And it won’t happen again.” I knew at that point that we are in this for the long haul, wherever my son decides to take it. Because gymnastics is in his soul. He’s a competitive athlete and nothing will stop him from pursuing his sport.

I’m just along for the ride. Praying that next time he doesn’t break his neck. Here he is at a recent meet. I still can’t believe we are related:-)

Smarty Back to School Giveaway # 1: Oliver’s...

I survived a 10-hour roadie!