From the Smarty Health Corner and Levine Children’s Hospital: New Heart Valve Gets Eli Back to What He Loves Most 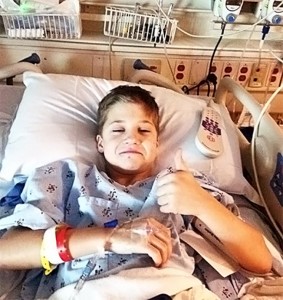 February is National Heart Month, and we’ve teamed up with our partners at Levine Children’s Hospital to bring you a series of patient stories that we hope will make a lasting impression.  We’ve introduced you to Kyler, and caught up with one of our favorite Charlotte families – the Olsens. Today we bring your Eli’s story. This was first posted on Carolinas HealthCare System’s blog. We are so grateful to them for the chance to share his story with you!

Eli LeMasters has a special anthem in his heart. It’s called a Melody Valve and it may keep the 12-year-old from having another open-heart surgery in the near future.

None of that matters though to Eli. He just wants to play sports. “Eli is like any 12-year-old boy,” says his mother, Chelsea LeMasters. “He has always been small; but don’t underestimate him. He’s a fighter.”

Eli was born with a heart condition called pulmonary stenosis – along with a ventricular septal defect. In other words, his heart was not pumping blood the way it should. When he was 2, one valve stopped working altogether.

After watching their son undergo several operations, the LeMasters family was grateful when the pediatric cardiology team at Sanger Heart & Vascular Institute told them about the Melody Valve and how it might mean delaying another surgery.

The procedure to insert the Melody Valve helps treat the condition of a faulty pulmonary valve, which keeps blood flowing between the heart’s right pumping chamber and the lungs. When implanting the valve, a cardiologist places the Melody Valve onto a catheter and guides it through a vein from the upper thigh to the heart. Tiny balloons inflate the catheter once in place, allowing the new valve to replace the old one.

“A select number of places in the country have the ability to insert this valve in children,” says Joseph Paollilo, MD, a pediatric cardiologist at Levine Children’s Hospital. “Melody TPV therapy does not replace open-heart surgery but is meant to delay the need for the next surgery.” In some cases, the Melody Valve may do a better job than traditional artificial valves that can weaken, leak or narrow over time.

“We felt the Melody Valve was a good option because it was the least invasive way to replace Eli’s tricuspid valve, and his recovery time was much faster this way, too,” Chelsea says.

“We tell the children it’s like getting an oil change,” says Dr. Paollilo, who personally follows each patient who has a Melody Valve. “It is an alternative to surgery and is most commonly used on babies who had valves placed during open-heart surgery. The valves do not grow with you so they need to be replaced as the babies get older. “

The LeMasters say the team at Levine Children’s Hospital put them at ease when it came to taking care of Eli. “You can see their passion and they genuinely care for the patients,” Chelsea says. “We always felt like Eli was in excellent hands.”

After his valve replacement, Eli is doing just fine. “The valve restored his stamina so he’s able to be active, keep up with his friends and play sports,” Chelsea says. “It seems like a little thing but it’s everything to him.”

Life as a Yes Mom IS a vacation

The Wait is Over – CycleBar is NOW...