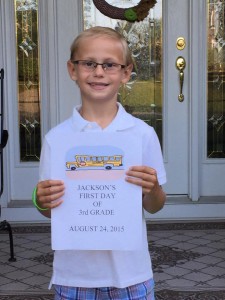 It is with great honor that I introduce you to this week’s Smarty Mom, Maggie Laskowski. She graciously spoke to me over the phone even though life as a mom of two young boys is insane, AND she in the midst of organizing a huge fundraiser in honor of her son, Jackson, an eight-year-old cancer survivor with an amazing story.

To say her family’s story puts things into perspective is an understatement. Their journey will move you – and my only hope is that it will move you to do something. Anything. It’s Childhood Cancer Awareness Month, and while there are tons of ways you can make a difference, here’s something you can do right now. Read her story. Learn more about the Keep HOPE Alive fund her family has established, and just do something. Donate, attend the event, or share it on social media – whatever you can do to spread the word so we can finally kick cancer to the curb.

Thank you, Maggie, for sharing Jackson’s miraculous story with us. Your family is an inspiration to all of Smarty Charlotte!

Tell us about your son Jackson’s journey. Jackson was diagnosed with Stage 4 hepatabalostoma, liver cancer, on January 24, 2010 – just a couple months shy of his third birthday and just a couple of days after my youngest son, Colton’s, first birthday. I had brought Jackson to the doctor for what I thought was just constipation, and we were whisked away to Levine Children’s Hospital where we found out he had liver cancer that had metastasized to both lungs. He had eleven rounds of chemo in the first year.

On June 30, 2010, he had a lung surgery to remove the tumor mets in his lungs – he started out with a total of forty mets, and they removed the remaining fourteen with this first surgery. He was placed on the organ donor transplant list on July 1, 2010, and received a liver transplant on July 27. 2010. He went through three rounds of post-surgical chemotherapy until October 2010. He was declared cancer free and stayed cancer free until February 2011 when the cancer came back to his lungs. He then started twelve more rounds of chemo. In June 2011, he had a second lung surgery to remove more tumor mets – they removed three the second time – all three cancers. He continued on with seven more rounds of chemo. 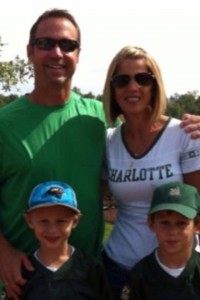 In December 2011, when the cancer returned to his lungs for the third time, the doctors and social worker sat down with us and said they we unsure if they could cure this.  They told us that if the cancer came back again, he would have about 18 months to live. They told us there might come a point when we need to learn to live with cancer and stop fighting it.  The doctors decided to start Jackson on a new regime of chemo, the “hardest one we could hit him with” for 8 rounds of chemo along with stereotactic radiation.

In May 2012, we stopped treatment and he’s, miraculously, been cancer-free since then. The high dose worked. It’s been three years, and he’s remained cancer-free.

How is his health today? Due to his anti-rejection meds and all the chemo, he does have kidney disease (renal failure). He’s not on dialysis yet – we are just playing around with finding the right combination of medicines right now. He will eventually need a kidney transplant.

What is Jackson like today? He’s eight, and he’s very, very active! He’s a complete sports FANATIC. He loves any sports – football, soccer, basketball, baseball. He plays baseball right now through a parks and rec league in our area – he wants to be a pitcher. 🙂

How has cancer affected your family? Well, it puts things in perspective really quickly. It makes you realize that the things you thought you couldn’t live without, you actually can live without. And, anytime you have a child with cancer, it’s almost impossible to have a dual working family. We spent 181 days at Levine Children’s Hospital in our first year – my husband and I couldn’t work, so our income was cut.

If you could go back to January 24, 2010 – the day you made an emergency trip to Levine Children’s Hospital and ultimately started this journey – what would you say to yourself? That you are stronger than you think. On that day, I thought I wouldn’t get through it. I thought I wouldn’t survive it – especially after losing my first child. But what I had learned through losing Nicholas was that I was a stronger person than I ever thought I was. My faith was stronger than I ever thought. So, I think I would tell myself to just remember that I am strong enough to get through, and my faith would get me through.

What advice would you give families who just received a cancer diagnosis? Don’t try to do it alone. It’s so hard to ask for help, but you need the support of your family and friends. Don’t be ashamed to reach out for help. Your life is turned upside down, but the little things have to continue. And if you have a friend whose family is going through something like this, don’t wait for them to ask you for help – they need groceries, their yard still needs to be cut, the little things can be huge for a family with a cancer diagnosis.

What would you say to other moms specifically whose child just got diagnosed or who might be undergoing treatment? Always trust your instincts. No matter what anyone tells you, do what you feel is best for your child. You have so many things thrown at you in different ways, but you know your child better than anyone. Do what your heart tells you what to do. And, most importantly, don’t ever give up hope. When Jackson was diagnosed, he had a less than 25% of survival. I refused to give up hope. I believed he would survive.

Tell us about your big fundraiser coming up, the Keep HOPE Alive Gala. We started the Keep Hope Alive Fund in 2010 when Jackson was in need of a liver transplant. It started out as way for a few of my girlfriends to raise money for our family, and it has grown into a fund that helps other families in need with things that insurance doesn’t cover – for example, rent, mortgages, utilities, car payments, hotel and airline expenses when traveling for a treatment, and even funeral expenses. We work through the Carolinas HealthCare Foundation and Levine Children’s Hospital.

Our first Gala raised $42,000 in one night. Last year we raised $64,000. Although my goal every year is to just do better than the last year, I know that ANY money we raise helps families. 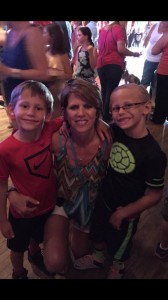 Three years ago we started sponsoring other kids who are in treatment – we call it “Friends of Jackson.” I love this part of the night – it’s a way for us to highlight other children’s journeys.

This year’s Keep HOPE Alive Gala is on September 18. We’ll have dinner, dancing and a live and silent auction. It’s cocktail attire, so feel free to wear that fun party dress that’s hanging in your closet :-). Go to http://jacksonlaskowski.com/ for more information or to buy tickets or donate!

Favorite place to shop for yourself? Kohl’s

Best way to spend an unexpected day off? Either in pajamas curled up on the couch or at lunch with girlfriends – or maybe both!

Best piece of mommy advice you ever received? It was from my priest a few hours before my Nicholas passed away. He said, “Continue to do as a mother what you know you need to do, and God will take care of you.”

Maggie is one of the most caring, giving and inspiring ladies I know. Although I’m not family, she has excepted me as a part of the family. It all started when I found out that Jackson was in Levine Children’s Hospital. I wanted to visit him and she met me at his room. From that moment on we have been friends ever since. The whole family holds a very special place in my heart that will be there forever. Maggie never gives up on the things that are most important to her, which is her faith, family and friends. She is a strong hard working lady. Every year she puts in many, many, hours to have a successful KEEP HOPE ALIVE GALA fundraiser. If you have never been please think about joining us this year in September. We always have a great time!

She is one of the strongest hard working and caring person in the world. She has been through so much and still holds on to her faith and does everything in her power to do anything for her kids and family. I wish I could be more like her. And aim to be. From fundraisers to just be a great mom. She is a Smarty Mom

Maggie is an advocate not only for her children, but ALL children. Way to go Maggie!