****THIS GIVEAWAY HAS ENDED**** but you can still enjoy why we love this film so much:-) ~Team CSP

It’s the OFFICIAL, official last day of school for most Smarty peeps (unless you’re in a year-round school?), and we can guarantee you that tomorrow at this time – or at SOME point during the day – your kids are gonna say “I’m bored.” Just know it, own it, and be prepared. But, don’t worry, we’ve got your back. We’ve got a Family Four-Pack of tickets to Discovery Place’s newest IMAX movie, “Great White Shark” – it’s the perfect solution to the “I’m hot, tired, and bored” cries. 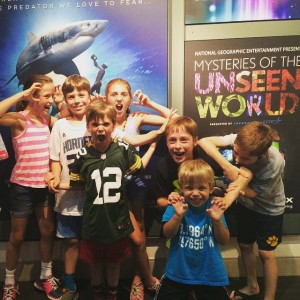 Now, we know what you’re thinking – a shark movie? Just as beach season is upon us? We had the same worries – shark bites, terrified children, ruined beach trips. But have no fear – this movie is the EXACT opposite! It’s such a great educational tool for the entire family. It’s a gorgeous film with tons of facts that will make you fascinated, not fearful. For example, did you know that you’re more likely to get hurt falling out of the bed then you are getting bit by a shark?! Our Smarty party had kids of both genders ages 4-11, and all came back raving, not running! 🙂

Here’s what Discovery Place has to say about the film:

A breathtaking encounter with the predator we love to fear

Misrepresented, maligned and misunderstood, the great white shark is an iconic predator: the creature we love to fear.

Great White Shark explores the great white’s place in our imaginations, in our fears and in its role at the top of the oceanic food chain. Shot on location in South Africa, New Zealand, Mexico and California, the film looks to find the truth behind the mythic creature forever stigmatized by its portrayal in the world’s first blockbuster movie, Jaws.

Great White Shark aims to reveal the strength and beauty of these animals by looking through the eyes of those who have been touched by their shark encounters: Mike Rutzen, South African shark expert, who swims with great whites in the aptly named Shark Alley; Chris Lowe, who has been tagging juvenile great whites off the coast of Los Angeles and discovering more and more of their secret life; and two record-breaking freedivers, Frederic Buyle and William Winram, who tag Great Whites by simply holding their breath and freediving with the sharks.

The film culminates in a direct encounter between man and shark.

This is a must-see for the summer, and here’s how Y-O-U could win!

One lucky Smarty will win a Family Four Pack of tickets to Discoery Place’s newest IMAX film, “Great White Shark.” Here’s how to win:
1. Like and share this post on your Facebook wall by clicking on the blue “Like” button on the top left.
2. Follow CSP and Discovery Place on Facebook
3. Make a comment in the Comments section below and let us know your FAVORITE beach that’s within five driveable hours of Charlotte.

That’s it! Winner will be announced in next week’s newsletter, so make sure you’re an e-subscriber! Happy Summer!!!

From the Smarty Health Corner and Levine Children’s Hospital: Tips on Summer Sleep Away Camp

Smarty Summer Workout Tips: All you need is...

This Smarty checked out her own ta-ta’s!

Father’s Day Tribute – The Men Behind the...

We take an annual trip to North Myrle Beach every year! We love it there!

I’m a big fan of Folly – love the laid back beach town.

We go to North Myrtle Beach every year with our kids!

We love Holden Beach – beautiful and calm – a great place for families!

We love Isle of Palms, very family friendly and not too crowded

Myrtle Beach State Park is beautiful, clean, and not crowded.