How many I’ll never’s have you said in your parenting career so far? Here are a few of mine that pop into my head that I now ignore just about every day of my life:

I‘ll never let my baby sleep in my bed (my almost five-year-old comes to my bed every night, and I never make him leave). 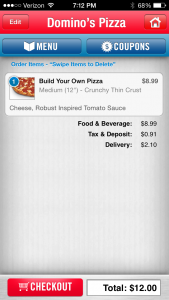 I’ll never over schedule my kids (we have an after-school activity every day of the week and up to seven games on the weekends).

I’ll never pick up after my kids – it’s their mess, they clean it up (it’s like I live with a bunch fraternity boys – my daughter included – who has never seen a drawer or a closet no matter how many times I show them otherwise).

I’ll never use the drive-thru as a dinner option (is the Domino’s app considered drive-thru or is that the genius woman’s drive-thru?).

And, one of my favorites:

Blasphemy to some; gospel to others.

Yes, I was the mom who said I’d NEVER let my boys play baseball. Too slow, too looooooong, too boring. Too many practices, too little action. I told everyone this – I was quite vocal about it. I even said it to my friends whose kids were playing baseball:

How do you SIT through that? I’d ask.

They’d look at my funny, try to defend their decision, and shrug their shoulders.

It was to me – but so was forcing my son to go to pre-club soccer practice twice a week (I guess it’s not normal to have a temper tantrum before every practice, right?).

I was quite the Debbie Doubter all the way up to his opening game this past fall. My doubt started to falter when I saw how cute a little boy is in a baseball uniform (Trish and Lori – y’all were totally right!). Then, after the first inning, something BIG happened. I actually became interested in the game. I learned what an RBI is (had no clue), and the funny motion the Umps make for “strike” and “ball” (well, I honestly just learned that over this past weekend after one full season and paying close attention). I sat through that first loooooong game totally entertained, nervous, proud, and excited – especially when my son and all of his teammates ran off the field grinning from ear to ear. 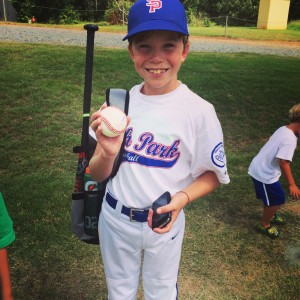 I walked away after that first night wanting to know more about this game – I quizzed my baseball-junkie neighbor on the ins and outs of the sport, and actually paid attention to which team won the World Series. Heck, I even watched a documentary on the history of baseball on Netflix (SO interesting!).

Despite all of my research, I still don’t know enough about baseball. I am usually quite confused on innings and have no idea the strategy behind the game besides trying to get to home plate without being tagged – I would equate it to someone trying to learn Chinese as an adult. Don’t dare ask me to keep that crazy stat book. 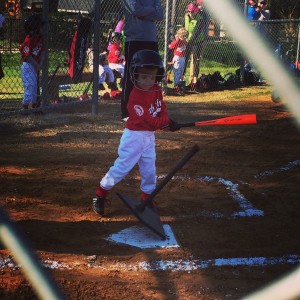 But it’s OK, because I HAVE learned this: my kids aren’t just here for me to teach them. They’re here to teach me, too.

It’s quite humbling when you think about it. We welcome these kids into the world so excited about all that we want to show and teach them, and then something magical happens: they teach us. We learn from them.

And here’s a big lesson my son taught me: Baseball is fun. No, seriously, it is. The families, the games, the history. It’s all fun – even if you have no idea what’s going on in the game half the time.

Of course, I’m the first to complain about a long scrimmage (you would, too, if you had four kids to feed, bathe, and put to bed at 8 pm!). I totally dread all the practices when I have to stay for the duration, and this past weekend’s cold snap took about ten years off of my life that I couldn’t afford to lose.

But, I still love it. I love the game because my sons love it – not because he’s going to be a professional baseball player – but because he loves it right now. Just like I love Olaf because my youngest son loves to give me “warm hugs,” I would pay $100 for Giovanni Bernard’s autograph (ex-UNC football player) because my middle son is obsessed with him, and I really don’t mind Justin Bieber because my daughter is his last fan standing. Despite what others might think of talking snowmen, UNC football, or washed-up teenage heartthrobs, I find value in all of those things because my kids value them (let’s just hope they don’t find value in Duke basketball).

This is what makes parenting a home run – sure, it’s awesome when they follow in our footsteps, but it’s even MORE awesome when you learn from the path they create on their own.

Your husband kills mosquitoes for a living – so what do you do?

Thank you for Your Kind Words and Support

11 Lessons on Preparing for Children

Time to Start Thinking about Kindergarten

Isn’t it AMAZING when your kid drives the sporting decision? It’s truly life-changing. So glad Hunt found baseball. This is his gig for sure. Just like my Walker and his gymnastics. Something magical clicked and that’s what they are supposed to be doing.

And I’m loving the “I’ll never..” commentary. I’m adding this – I’ll never let my kids watch movies in the car. HA – a joke, my DVD player is smoking all throughout Charlotte. I successfully I nevered this until the twins came along. And then mom survival mode kicked in.

GIRL! Our DVD is on FIRE, too! Only way I can listen to my music! ha!

First off! Hello Ava the willette girls are IN for the Bieber come back! You are not alone! #belieber
And I love this CP. Man kind of want a boy just for baseball. I may have to come watch Brady and Smith in action. I love how you say too that it’s what they love “righ now.” Thats so important. We get so caught up in grooming future whatevers that we don’t live in the present fun. Ha know? Xo

Whew – glad there are some beliebers out there still!!! YES! Come to a t-ball game – cutest thing ever!!!

I love how you articulated this! I know we tried to explain, but some things you just have to experience to really understand. I never had any interest in baseball or knew many of the rules until he played.
It IS fun! Who knew?