Home Directories Smarty Review and Giveaway: CTC’s ‘Jackie and Me’
DirectoriesParentingThings To Do

Smarty Review and Giveaway: CTC’s ‘Jackie and Me’

I am a HUGE fan of Children’s Theatre of Charlotte – I have never been disappointed in one production I’ve seen. I have always applauded loudly, recommended their productions to all of my friends, and genuinely been proud that my hometown’s children’s theatre can produce such amazing pieces. My kids are with me on this – the Perry family is a BIG fan of CTC. 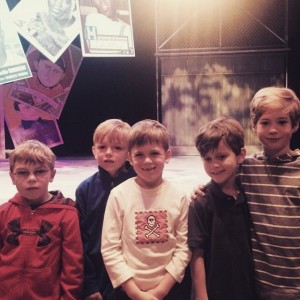 I have never, however, teared up at the end of a CTC play. Not once.

I took my seven-year-old son to CTC’s newest production of “Jackie and Me” – we met about six of his first-grade, baseball-loving buddies and their moms for a little mother-son afternoon that meshed a little culture with sports (because what other way do you introduce culture to sports fanatics?). “Jackie and Me” is not a musical; there aren’t showy costumes or big sets. But, somehow it captivated not only a group of fidgety seven-year-old boys, but also their fidgety thirty-something-year-old moms, for a full 90 minutes.

“Jackie and Me” is the story of one of America’s greatest baseball players and the first African American to play the game, Jackie Robinson. The play starts out in present day but quickly switches to 1947 through a baseball-card-turned-time-machine (I’ll let you see the play to understand that one). The main character, a boy who is a white student in present-day researching Jackie Robinson for a book report, is black when he lands in 1947. He is able to experience firsthand what an African-American boy living in New York City in 1947 might have experienced – bigotry, stereotypes, misunderstandings – and learn from those experiences.

He meets Jackie Robinson and is able to understand the man behind the legend – the man who stood up to so many people who hated him and wanted him to fail. 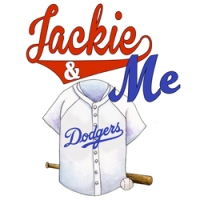 The play does an outstanding job at the touchy subject of race – it doesn’t talk down to the kids, but it also doesn’t talk above them. My seven-year-old definitely did not understand all the nuisances – or the sensitive language that CTC warns viewers about (see their web site for more deets) – but, what he did understand is that a man overcame a great adversity to play the game of baseball better than most. For a sports-loving seven-year-old, that’s truly all that matters. And as his mom who wishes for him to never notice race or let it be a factor in his opinions on others, that’s exactly what I wanted him to take away from seeing the play. I wanted him to see the human, not the color. (I love that that’s usually what kids see.)

As a grown up who is a little obsessed with this era, this play fascinated me. I’m determined to read up a little more on Jackie (anyone know any good historical fiction on him??). And, yes, I did tear up a little at the end – it was SO well done and very moving (is that what being a mom of three boys does to you? Makes you tear up at sports plays that have so much heart??)

All of that being said, I definitely would not take anyone under the age of seven (CTC is always dead on with their age recommendations), and for the older children who might “get it,” be prepared to have some serious discussions on history and how we can learn from it.

I would definitely recommend this to any family with older children – or any sports-loving adult.

Here’s what CTC has to say about “Jackie and Me”:

Take your family out to the ballgame, and back in time, with this powerful, heart-warming story about the true meaning of courage. Ten-year-old Joey Stoshack has a special talent for time travel; so when he gets an assignment to write a report on a role model, he uses his powers to travel back to 1947 and meet the legendary Jackie Robinson, the first African-American baseball player in the major leagues. Joey plans on writing a prize-winning report, but he never plans on a trip that will forever change his view of history.

Recommended for ages 7+. Click here for show times and pricing.

Smarty Giveaway: A Family Four Pack of Tickets to CTC’s ‘Jackie and Me’

One lucky Smarty will win four tickets to see CTC’s “Jackie and Me.” Entering is easy:
1. Follow CSP and CTC on Facebook.
2. Share this post on your Facebook wall.
3. In the Comments section below, tell us who your kid’s favorite baseball player is.

That’s it! Winner is announced THIS Friday, March 7 – enter today!

Hippity-hop on over to the Buttercup and fill...

And we have a winner…

I have a 7 year old baseball loving boy, who happens to share a birthday with Jackie Robinson. He has a throwback JR jersey he wears and is currently doing a project on JR for school. I could not be more proud that my son has picked such an amazing man/athlete to look up to. I’d love to send him and my husband to see the play!

My son is turning 7 this month and has loved baseball since he could pick up a ball and throw it. We’ve already scoped out this play and he can’t wait to go. I’d love to take him to this play and make a whole afternoon out of it as part of his birthday celebration! His favorite player is “the Great Bambino,” “the Sultan of Swat” and “the Colossus of Clout.”…. Babe Ruth.

7 year old son that doesn’t watch baseball, but loves to play it with his friends. He doesn’t have a favorite player, yet, but I’m sure he’ll pick one when he’s 8.

My 9-year-old son is baseball obsessed! He loves a variety of players… current and historical… but I would have to say his favorite is Dustin Pedroia of the Boston Red Sox. I love that he understands and appreciates Dustin’s commitment to the game.

I have a 7 year old boy whose response, when asked who his favorite players are was, Gronkowski and Brady 🙂