Home Parenting Squishing ourselves into the family-of-four box
Parenting

Squishing ourselves into the family-of-four box

My two older kids went to sleep away camp last week, and let me tell you, it was like I shed 110 lbs. You know I missed them. I did. But, goodness, things feel so much lighter when you take a couple of kids out of the equation. Plus, anytime you’re down a kid, it’s amazing how the dynamics change. Do you get that with your brood? Siblings that barely spoke to each other without a scream or a crying fit suddenly spend two hours together playing Legos. They act like teammates rather than archrivals. Amazing. 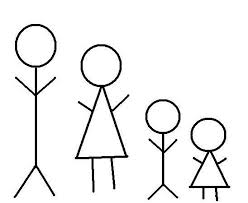 And since we’re not at the stage where all of our kids go to sleep away camp at the same time and allow us to play Empty Nesters for a week (a role I assume is quite enjoyable since it’s only for one week), we spent the week on a family-of-four stay-cation. Now, I am totally convinced that the world was designed for a family of four (I had a feeling it was, but it was finally proven last week) – not for a family of three, five, eight, or ten – only for a family of four. Just like it’s designed for the right-handed and people of average height. It just makes everything logistically easier when there are four involved.

Restaurants – We fit in a booth.

Cars – No one is squished in the backseat of a car if you’re a family of four.

Safety Patrol – I have two hands to hold two hands.

Energy Efficiency – Laundry is cut in half (there’s some algorithm out there that proves on additional kid actually doubles dirty clothes. I know. It doesn’t make sense, but I’ve seen it with my own two eyes),  and the house just feels cooler without all the hot air extra kids produce. I should get a “green” tax rebate for the week the older two kids were away.

Dwellings – It seems like the trade standard is 4 BR, 2.5 BA, and Jack ‘n Jill bathrooms were designed with Brandon and Brenda Walsh in mind – no more, no less. Actually, have you ever seen a well-designed kids’ bathroom? Why isn’t it the size of the gigantic master baths you see in new homes?! Don’t builders know the ENTIRE family is in the bathroom at the same time? Blog topic for another day.

Entertainment – A “family pack” of ANYTHING is never for a group over four. Ever.

And, the list goes on. Now, y’all know I’m not complaining or saying having less than four kids is easy – good lawd! I don’t believe that nonsense. Kids are hard and fun no matter how many you have. But, I do think it would be fun to find a hotel room with a couple of sets of bunk beds (NOT the Great Wolf Lodge, thank you very much). Just like I think it would be really awesome to have a decent pair of left-handed scissors and a manual can opener that makes sense.

Smarty Giveaway: A Caddy by Simply Caddy for...

An Open Conversation on Bullying

A poverty simulation that will motivate you to...

You speak TRUTHS!! How funny and honest! Right know we ARE a family of four and I constantly consider this when contemplating growing our family!

We have an awesome can opener that twists on the top. I haven’t tried to use it left-handed, so it may be crap. I hadn’t even thought about can openers. Oh the things you’re going to have to teach Holt for me 🙂

I need to try that can opener pronto!! And Hunt and I will make Holt our understudy. No prob. I LOVE how we are the only lefties in the fam. Now, can you teach this lefty how to knit??

I’m a righty surrounded by lefties – Doug, Clay, EJ – all lefties. I marvel at you family of 6’s. You are raising the most resilient and self-sufficient and independent kids who will be ready for anything that life throws their way. Meanwhile us families of 4 (speaking fo rmine only) are likely raising the most dependent and totally helpless kids.