Home Parenting Excuse me, YMCA lifeguard, can I borrow that whistle?
ParentingThings To Do

Excuse me, YMCA lifeguard, can I borrow that whistle?

We’ve been hitting the YMCA pools a little more often than we have in summers past. My youngest is finally donning a yellow band (you know the price of yellow gold these days – that’s how valuable that yellow band is to me. I’ve Instagrammed that yellow band like it’s my JOB), and now all four kids can FINALLY do most of the water slides. Do you know how many years I’ve waited for this moment?! Ten, people. TEN. Actually, make that eleven summers. 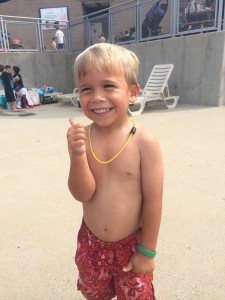 I can’t even imagine the day they all have green bands – be still my beating heart!

And, since the YMCA waterslides are the closest thing my kids are getting to Adventure Landing or Carowinds’ Boomerang Bay (I’m still mustering up the courage to take all four kids to Carowinds by myself), AND since it’s waaaaaay cheaper than the latter two, we get our big, fast waterslide fix in just about an hour’s visit to the Y.

Until the whistle blows.

Now, I am not saying anything negative about the YMCA lifeguards. Heaven knows, I wouldn’t want that job. What they have to keep up with is ri-DONK-ulous (kind of like taking four kids ages 10 and under to Carowinds by yourself). All of those kids! All of those campers! Yellow band, green band, no band. I get why there are one million rules laid out in the YMCA lifeguard’s handbook.

I WANT them to be strict. No doubt about it. My kids and I are generally pretty good rules followers, but we don’t stand a CHANCE at the Y pool. We’ll easily walk away with no less than 5-7 infractions – infractions that I wasn’t quick enough to catch before the cute 18-year-old blonde in the red bikini. And, I promise I am paying attention – at least I think I am. Sometimes, I swear, when that whistle blows, it’s like they’re blowing their whistle on me. And I’m not even doing the water slides. Those lifeguards mean business, and if you thought you had your kids under control, think again.

TWEEEET! (FYI – “tweet” is the official word to describe the sound a whistle makes. I read it on the Internet, so it’s gotta be true.)
Wait until you hear the color the second time to go down the slide!

TWEEEET!
Too many bubbles in the pool!

TWEEEET!
No sitting on the edge of the pool with your feet in the water anywhere close to the slides! (Ahem, that was a tweet directed at me.)

TWEEEET!
Don’t fight the current in the whirlpool!

For some strange reason, I feel like I should explain my kids’ actions after every tweet (not that I do – don’t worry) – because the only thing worse than trying to explain it to death is to ignore it and be judged for not paying attention. It’s like the ultimate parent-teacher conference.

This is what I would see in the lifeguards’ faces while I weakly made my case:

TWEET! Get your kids under control, woman. I’m an 18-year-old college student who could do your job way better, so if you thought that yellow band meant a little F-U-N this summer, think again, sister. Buckle up and get some control over your brood.

But, I’ve gotta hand it to the lifeguards: with every tweet, my kids actually LISTEN and do what they’re being told to do without thinking twice.

What’s up with that?  That whistle obviously holds magical powers.

As we drove home the other day after getting tweeted left-and-right, I felt like I had a YMCA lifeguard on either shoulder calling me out on every other parenting infraction I’ve had over the last few weeks of summer:

TWEEEET!
Math worksheets have not been touched.

TWEEEET!
The three-year-old had a Popsicle before 8 am.

TWEEEET!
Pool time does not count as bath time.

When I worked at the Harris Y outdoor pool front desk one summer (I am now sure the Summer of 1995 YMCA moms wanted to MURDER me when I told them no pool noodles allowed), I remember thinking that those Y moms had it so good. A little pool time, a little toddler time, a little tan time. No sweat.

There is nothing sweatier than keeping up with your kids at the Y pool – or any other pool. Well, except for Carowinds.

Thank you, YMCA lifeguards (and lifeguards everywhere!), for watching out for my kids – and all of our kids. I know it doesn’t look like it, but I promise I am a decent mom. I promise I am paying attention. I promise that if you let me borrow that magical whistle to get the kids in line at home, I will tell my kids to cut your kids a little bit of slack in 15 years when they are life-guarding. 😉

Hilarious! I love your wit! I felt like I was right there with you the whole time!

This is SO good!! I am right there with you. I have a green necklace, a recently earned yellow, and one still in a life vest for fear I might take my eyes off of him to pay attention to one of the others for one split second too long. We spend most of our time in the kiddie pool still but I can’t wait for the day to come when they all can wear green! We are seven years into this ten year process. FYI, my four year old just asked me for a popsicle, it’s 9:30am! LOL

PLEASE don’t tell me that pool time doesn’t equal bath time! It’s got chlorine in it. And if they’re going to get in tomorrow, can’t that count?! You are kind of my hero already, but the day you take all four kids to Carowinds by yourself I will drive to Charlotte and grovel at your feet 😉