Smarty Giveaway: Win a Family 4-Pack to Harlem Globetrotters on 3/22!

If you are not familiar with the Harlem Globetrotters, read on.

They are known as “the magicians of basketball” and this exhibition basketball team travels the world to show-off their brilliant skills. The show is a great mix of supreme athletics, theater and a comedy routine. It’s good ‘ole fashioned family fun at its finest that has thrilled audiences for generations.

From our friends at Harlem Globetrotters: 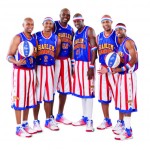 The world famous Harlem Globetrotters will take fan interaction to a new level when the 2014 “Fans Rule” World Tour comes to Time Warner Cable Arena in Charlotte on Saturday, March 22, 2014, at 1:00 p.m. Online voting is now open at harlemglobetrotters.com/rule, where all fans can choose which new game-changing rules they want to see in their hometown.

The Globetrotters were the first organization in sports and entertainment to let fans vote on rules when the team introduced the concept last year. Since the fan response was so overwhelming, the team is doing it again – but with a major twist.

Hot Hand Jersey – Both teams will have a “Hot Hand Jersey” they can pass among each other. The player who is wearing this jersey will receive double points on made baskets.

Make or Miss – The quarter begins with only two players on the court for each team. When a team scores, a teammate may enter the game. When they miss, the player missing the shot must leave the court, leaving his or her teammates shorthanded. 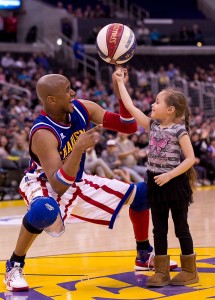 1) Vote in comments below with which new rule (see above) your kids would like to see in Charlotte.

3) You MUST be a CSP e-newsletter subscriber.

The fine print: Please include your first and last name with email address so we can contact you if you win. The winner will be announced on Wednesday, March 19th.

Smarties, you can get a $5 discount on up to 8 tickets (select price levels only) by using the discount code TROTTER with this link.

Nosebleed: Is it dangerous?

My kids would love the trick shot challenge! 🙂

Make or mIss – sounds like a lot of fun!

Make or Miss! Plus the double balls looks awesome!

Trick shot challenge…my son turns 6 this month and is always trying tricks on the swingset, trampoline and bike. He likes tricks and he’d love to win this as a birthday gift!

Rule #2: Make or Miss!! What a great way to add even more excitement to the game!

My daughter and I agree that MAKE OR MISS would be really fun to watch!

The Hot Hand Jersey would be a big hit with my kids!

Trick shot challenge for sure!!!