Home Camps Confessions of a Camp Harrison parent: Sending my 6-year-old to overnight camp
CampsParentingThings To Do

Confessions of a Camp Harrison parent: Sending my 6-year-old to overnight camp

Until I became a parent, I thought going off to spend-the-night camp for the first time was a rite of passage for the child. Well, it is. But I had no idea how big of a deal it feels like as a parent! When I went to camp for the first time as a 10-year-old, I figured Mom and Dad were doing backflips for the breather and I’d be the one doing all the home-sicking.

Then I sent my 6-year-old son off to Camp Harrison. 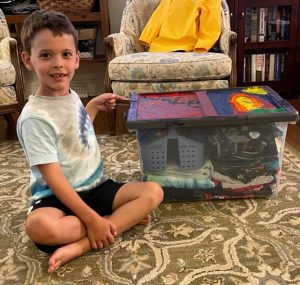 Wade packed and ready to go!

Some of my friends probably thought it was a little crazy to send a child so young to overnight camp and were nice enough not to say it to my face. Some might have thought it was a cool step and felt a twinge that maybe they should be doing it too. But not many of Wade’s close friends were actually going to spend-the-night camp. At 6, not many boys are doing sleepovers with friends yet. Wade had only slept over at relatives’ houses.

Thanks to the amazing staff at Camp Harrison I was able to connect with another mom with two boys in our cabin. She was the perfect person to lean on leading up to and during the week Wade was at camp! She’d sent her 7-year-old son, then 6, last year and was sending him again, along with his 6-year-old brother. The best possible endorsement.

With that in my back pocket, and believing deep down, despite my nerves, that Wade was ready, we put it on the calendar. I’d seen him in action at Camp Harrison’s “Mom and me” weekend earlier in the spring, and he had THE best time. He got a glimpse of what he would do at camp and I watched him practically skip to the curvy slide at the pool and make immediate friends with a boy we shared our cabin with. 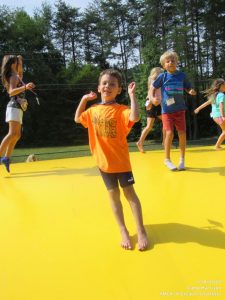 Wade on the “mountain bounce.”

While we were both nervous about his being away from home, I didn’t have to do any convincing to sign him up.

In the weeks and days leading up to drop-off, Wade and I talked occasionally about how much we would miss each other, but I think we both knew it was something we (yes, we!) should do, and that we could handle it. Besides, it was “only” for three nights.

Wade was signed up for “mini camp,” which was a Sunday to a Wednesday. I didn’t realize when I first signed up, that mini-campers are given the option on Tuesday of staying the full week. (Camp Harrison gives parents the option to pay for the full week at that point and offers to do a load of laundry.) When we talked about the possibility before Wade left for camp, he told me he would definitely come home. When the time came? He decided to stay.

When the camp counselor called me Tuesday night to tell me Wade wanted to stay until Saturday, I was so proud of him. I was also excited because it was my first real confirmation that he was having a blast! (Those were the counselor’s exact words.) Combing photos on the camp website gives you clues, but words are the best feedback!

I was also a little bit taken aback. It meant four more days before I would see Wade. By this point already, everybody in our family – Wade’s younger brothers, his dad, aunt, grandmother – were almost aching we missed him so much. 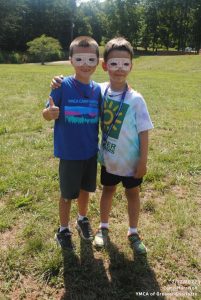 But at that point, I could pore over photos from Camp Harrison with more certainty, and what I saw was a boy with his toes in a creek bed hunting for crawdads, two-“man” canoeing on the lake (he can do that?) and in one, arm draped over another boy, wearing hand-crafted Spiderman masks and matching smiles.

When we picked Wade up from camp on Saturday, he was a little tanner, a little dirtier (was that the same shirt he’d worn the day before?) and definitely tired. I realized pretty quickly it was too much to pepper him with 100 questions on the car ride home. So I settled for taking clues from what came home with him.

He proudly showed me a deck of Star Wars cards he had traded a cabinmate some yogurt-covered raisons for – who knew he could barter?! And as we drove out of the Camp Harrison gates, he read out loud a really nice and meaningful note he’d gotten from his counselor.

As a mom, of course, I’d been interested to see what would actually make it back from camp. I had to laugh when only one of four flip flops I’d packed and labeled made it. But that was trumped by the fact that his water bottle and goggles did come home. He told me he never wore the goggles because he forgot where they were packed, but we can’t be too picky, right?!

It’s been fun to hear Wade sing new camp songs and teach his younger twin brothers how to chant “Boys Camp!” I had to smile when another mother told me after a playdate with a friend how much Wade had talked about what he did at Camp Harrison. 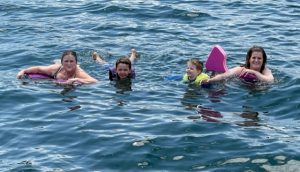 Wade (second from left) his aunt, his younger brother Johnny and Mama swimming in Keuka Lake

But not until a couple of weeks after he got back did I truly appreciate all the growing up he’d done there. We were visiting family in upstate New York last week and spent a day at one of the Finger Lakes. We were on a motor boat ride and out in the middle of Keuka Lake – which is 22 miles long and where we were, about half a mile wide – when Wade asked if we could stop the boat so he could swim in the middle of the lake. Of course, we obliged, lifejackets and all.

Once we got back to shore, Wade asked – and then proceeded to – take a paddle board out on his own. He only made it down shore a little bit but never once asked for help or panicked. This was not the same boy I had sent to Camp Harrison.

In a quiet moment a day or two after Wade got back from camp, he had asked me: “Did you miss me?” Apparently, he needed some confirmation like I did. “Did I ever” was my attempt at a measured response. I don’t want to be the parent that holds my child back, so I spared him the “aching” part. I do think, though, the time apart helped us appreciate each other a little more and also get a little braver. Next year we’ll be that much more prepared.

On our way out of camp, with Wade in his conspicuously re-worn orange shirt, flanked by a pair of giddy twin brothers, we stopped by the cafeteria to sign up again for next year.

For information about YMCA Camp Harrison visit their website.

Where campers build character, develop confidence and grow in their faith.