From the Smarty Health Corner and Novant Health: State trooper had just turned 30 when he had massive heart attack.

North Carolina State Trooper Ethan Bradshaw was pumped for the day. He was just a few weeks past his 30th birthday, and his wife, Mickaela, was four months pregnant with their first child.

Ethan and two buddies met up that Feb. 24 morning at a commercial gym for their Muay Thai and Brazilian Jiu-Jitsu practice. The training helped him keep fit and prepared for his role as a state trooper. He was set to work a shift that night.

Ethan had played baseball, wrestled, and was a middle linebacker and fullback on the football team, while Mickaela – his high school sweetheart – was a cheerleader. Now the Kernersville couple was expecting a son. Ethan’s hopes for a baseball career faded, in part, due to injuries. But one of his coaches was a state trooper and the career felt like a natural fit to Ethan, too.

Since 2015, Ethan has been helping stranded motorists, getting drunk drivers off the road and performing other duties to keep the roads safe in Winston-Salem and Forsyth County. He even taught in the trooper academy. Ethan had always wanted to be part of something bigger than himself, and the state troopers were a team with a deep sense of camaraderie.

That extended family, along with physician Dr. Samuel Turner with Novant Health Cardiology – Kimel Park Main in Winston-Salem, would help pull him through the trauma of his life.

20 minutes of CPR and 100 state troopers

Toward the end of the martial arts session, Ethan didn’t feel well and left early, around noon, which was unusual for him. Young and healthy, he almost never saw a doctor. 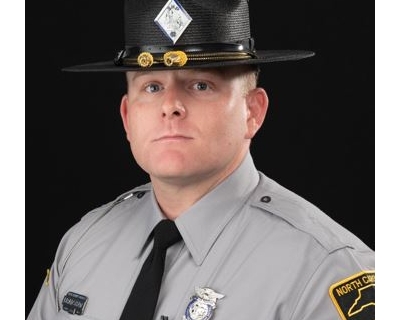 Ethan vaguely remembers calling a couple of trooper friends to ask, “What do you think this is?” They told him it sounded like a heart attack and urged him to get to a hospital. “I didn’t want to go,” Ethan said. “I was kind of fighting against them.”

After calling Mickaela, he decided to drive himself to Novant Health Kernersville Medical Center. Mickaela arrived first. Her mom, who worked there as a radiology technician, brought out a wheelchair for Ethan.

No more than five minutes later, Ethan collapsed in the wheelchair. Hospital team members rushed to administer CPR. He was in full cardiac arrest.

Mickaela couldn’t believe what was happening. Her young, athletic husband, a man who exercised six days a week and had no risk factors for heart disease, was struggling to stay alive. His care team shocked him with a defibrillator to try to reset the heart to its normal beat. Just when they thought they had brought him back, his heart failed again.

It was looking so bad, and the CPR had gone on for so long, that at one point the team asked Mickaela if they should continue. Betting on her husband, Mickaela cried, “Yes!”

After 20 minutes of CPR and seven shocks with the defibrillator, hospital staff finally felt a pulse. An ambulance transported Ethan to Novant Health Forsyth Medical Center in Winston-Salem, where Turner was waiting.

Ethan hovered between death and life, in cardiogenic shock. His blood pressure had dropped dangerously low. Turner said he began by implanting an Impella pump to help Ethan’s heart “pump blood to his vital organs – his brain, kidneys, liver – so that his body can be supported while his heart is weak.” The tiny pump, no wider than a pencil and implanted through a standard catheterization, provides blood flow to the body while the heart is recovering.

A coronary angiography, which takes pictures of the heart arteries, revealed a 100% blockage in the left main artery down the front of Ethan’s heart.

It’s nicknamed the “widow-maker” heart attack because “a lot of times, this type of blockage is not survived,” Turner said. Despite the name, women get them as well.

Over the next several hours in surgery, Turner repaired the blockage by placing two stents in the artery to resume the flow of blood. Meanwhile, Mickaela called one of Ethan’s colleagues to tell him what was going on. By the time Turner came out to tell Mickaela the surgery had been successful, about a hundred state troopers had gathered in the waiting room with Mickaela and her family. “That was one of the most touching things I saw,” Turner said.

After the surgery, the team placed Ethan on a ventilator, or life support. Several days in, they tried removing the device, but Ethan aspirated fluid into his lungs and contracted pneumonia. He stayed on the ventilator for 10 days. Mickaela was by his side as much as she could be. She also needed moments to escape and have a good cry. She was four months pregnant, with a husband on life support.

Once Ethan was nearly ready to breathe without the ventilator, he finally woke up, and he was scared: “Why am I hooked up to all these machines? Where is Mickaela?”

He told nurses he wanted to see her by imitating a pregnant belly with his hands. Ethan assumed he had been shot or in a car accident because his ribs and chest hurt so much from the CPR and the defibrillator shocks. He was stunned when he heard it was a heart attack.

‘I didn’t know if I would wake up’

After three weeks in the hospital, Ethan was transferred to a Novant Health rehabilitation center for a week to strengthen his legs and make sure he could manage the stairs in his split-level home. In exercise sessions, “patients’ blood pressure and heart rate are continuously monitored to make sure there’s no abnormalities,” Turner said. They learn “the tools of exercise, diet and living a healthy life now that they’ve had a heart attack.”

Ethan continued outpatient rehab but discovered it was more difficult than he expected to get back into a routine at home. Falling asleep was especially hard, he said, “because I didn’t know if I would wake up.”

For Mickaela, an ambulance speeding past with lights strobing and sirens wailing can trigger scary memories. The couple talk through what they’re feeling. Those conversations helped Ethan trust that better days were ahead and that he could believe Turner’s promise of a complete recovery. 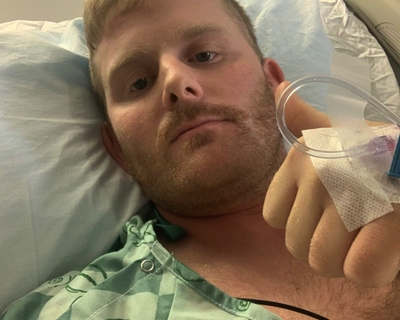 Ethan will be on heart medications for the rest of his life. He’ll need to eat a low-salt, low-fat diet. His exercise program will focus on cardiac strengthening, with the goal of 30 minutes a day, four or five times a week. A recent echocardiogram, which is an ultrasound of the heart, showed his heart is once again pumping normally. Ethan was cleared to resume work in mid-May, nearly three months after the cardiac event.

Heart disease is the top cause of death in the United States. Though Ethan’s grandfather had a heart attack in his 50s, neither his mom nor dad has heart disease.

Turner said there’s no obvious cause for Ethan’s heart attack. Fit 30-year-olds aren’t expected to have major cardio events. “While the majority of patients who have heart attacks have a lot of the risk factors, such as high blood pressure, high cholesterol and diabetes, Ethan did not. Heart disease does not discriminate on age. It can affect anyone at any point in their lifetime.”

What Ethan did right was pay attention to how his body felt and seek help. “He realized something bad was going on,” Turner said. “A lot of 30-year-old healthy guys might just blow off their symptoms.”

The experience has changed Ethan. “I tell people I love them a lot more,” he said. “I kept to myself more before this. I’m more emotional now. Even the guys I work with, I tell them I love them.”

He calls Mickaela a “rock star” for how she handled everything. Soon, he and Mickaela will have someone new to love. The couple is expecting the birth of their son in July.

From the Smarty Health Corner and CEENTA: Is my nasal congestion causing sleep issues?

From the Smarty Health Corner and CEENTA: When...

Honey, Let’s go on a BabyMoon!

Bowling to beat cancer? You bet!