Home Activities Bored of the beach? Visit U.S.S. Yorktown on next visit to Charleston!
ActivitiesEntertainmentThings To DoTravelweekend activities

Bored of the beach? Visit U.S.S. Yorktown on next visit to Charleston!

One of the things I’ve always loved about taking our family to the beach near Charleston, S.C. is how many choices you have for things to do on a rainy day or if you need a break from the sand and sunblock vortex. On our trip to Isle of Palms, S.C. last week, we re-discovered the U.S.S. Yorktown at Patriots Point! 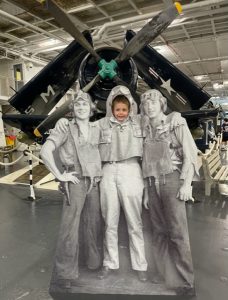 By Friday of our week at the beach, we were ready for a change of pace, and we got it just by making an easy 25-minute drive from Isle of Palms south on Highway 17 to Patriots Point. We packed a snack and water bottles and planned to stay an hour or two before coming home for lunch. Guess how long we stayed? Four hours. And we would have stayed for longer but we had a cousin with us who was headed home that day and needed to get back to the house.

I didn’t do any planning or prep. We just showed up, got our tickets, grabbed a brochure with a map and started exploring. We took the stairs up to the main entrance on the Yorktown with plans to tour it first then head down to the U.S.S. Laffey, the smaller destroyer ship anchored beside it.

We started at the main entrance on the second-to-upper deck of the Yorktown and got our bearings. We checked out a few airplanes, eyed the flight simulator and then started making our way below deck on the self-guided tours. There are four of them and they are marked so well throughout the ship that my husband and I could 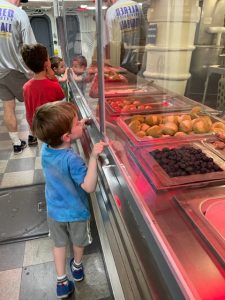 Boys getting a glimpse of the ship’s “grub.”

hang back and let our boys lead the way. There were signs posted that said “Follow Scrappy” the dog pilot character, which made it easy for them to navigate the bowels of the ship. I think that was part of the fun for our boys, having that extra freedom. And it was such close quarters down there, we didn’t have to worry about them wandering off into to some random nook or cranny where we couldn’t find them.

The boys loved seeing the sailors’ sleeping quarters, the mess halls, and even their barber chairs and dental offices. We got to see the ship’s chapel, the sick bay, and the room where technicians worked on torpedoes. We got to go above the main deck into the navigation area and into the captain’s quarters, which I’d never done before.

Having so much the boys could see, climb and touch was a great way to keep them learning while they were still moving. And throughout the four self-guided tours, there were historical exhibits with models of ships and maps, portraits and artifacts that kept my husband, a military buff, locked in and learning at the same time too. 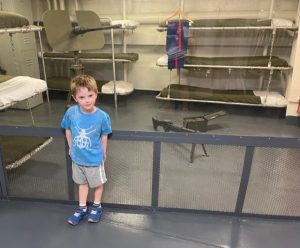 As the boys get older, I would love to take go back to the Medal of Honor Museum on board the Yorktown. That was one of the most memorable parts of my first visit there. Just reading one story of a Medal of Honor recipient is something that stays with you. And you can never get them all read.

By the time we finished at the Yorktown, my husband and I were ready to head back to the beach house, but our boys voted unanimously to stop at the U.S.S. Laffey as we had planned. So we climbed aboard for a quick look around. A highlight was sitting in an air-conditioned cabin inside the ship and watching a clip from the History Channel about the U.S.S. Laffey

battling a fleet of Japanese Kamikaze planes during World War II. We didn’t stay for the entire video but couldn’t leave until we promised the boys we’d find it online for them to watch when we got home. It really brought to life – for them and for us – what we were touring that day. 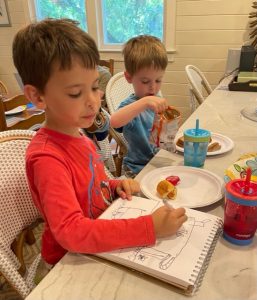 Wade, 6, coloring the Yorktown after we got home – his idea.

We left Patriots Point promising ourselves that we’d be back, because even after four hours we hadn’t seen as much as we wanted. Some of the things on top of the list for the next visit: start on the U.S.S. Laffey, when our energy is higher. Visit the Vietnam Experience, a 2 ½ acre exhibit where you can see helicopters, trucks, a river boat and other equipment that simulate life in wartime there. As the daughter of a Vietnam veteran, it’s something I both want and need to do. And for our son Johnny, one of our twins, we promised a ride in the flight simulator, which at $8 wasn’t out of the realm. We also sped past the museum store, which my boys weren’t happy about. Next time we’ll stop.

Some mom tips: There are plenty of bathrooms conveniently throughout the ship. There are also vending snack and drink machines, which take credit cards, so there are easy ways to fend off a case of the grumps. There are water fountains where you can refill water bottles too. As for meal options, there was a hotdog stand near the ticket counter on shore, and the museum website lists dates that food trucks will be on site. 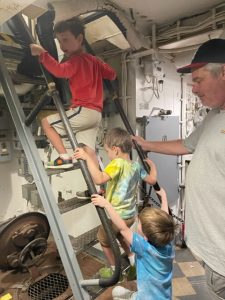 Be ready to climb some narrow stairs, though that’s part of the fun. You get a real sense of what sailors in World War II spent a lot of their energy doing – and trying to imagine them doing it fast, when in danger is crazy! But all of the ladders come with handrails and narrow enough openings that none of us came close to falling or feeling unsafe. It’s just a good idea to wear sensible shoes!

Even on a hot day, there are areas below deck that are air-conditioned to give you breaks from the heat. And standing on the second deck, you get nice breezes from the Charleston harbor! Going in the middle of a hot summer day in South Carolina is doable!

Things to do: You can see fireworks on July 4th at Patriots Point. There are a ton of new hotels popping up in that area if you want an easy in and out! Also the Yorktown hosts Operation Overnight for the especially adventurous who’d like to experience an overnight stay on board!

For tickets to the U.S.S. Yorktown and more information, click here.

From the Smarty Health Corner and Novant Health: With formula shortage, more parents discovering what food insecurity feels like

Need to get the kiddos out of the...

Smarty Alert: Are you a Bob Mayberry Moms...