Look around Charlotte this summer and you see kids in camps of all kinds. Ours have been in superhero camp, space camp, and art camp, with bug camp and sports camp to come. There are so many terrific options. But I came across one recently that I mentally bookmarked as must-do when my kids are a little older: Charlotte Bike Camp. 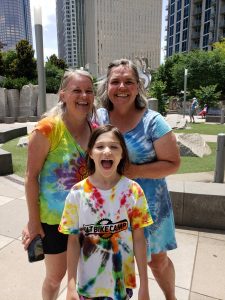 Co-founder Bethanie Johnson and a team of counselors take out groups of 12-15 children on bike rides around the city – two groups of campers each week – teaching them bike safety and best riding practices, while stoking both their sense of independence and a lasting passion for biking.

The idea was born out of Bicycle Fridays, something Johnson started in her job as a teaching assistant at Park Road Montessori School. Beginning in 2014, she and three other teachers and teaching assistants volunteered to join kids on a bike ride to school, to help them get more active and learn bike safety. It started with children in the neighborhood. Now they meet at Freedom Park, eat a breakfast treat and ride to and from school together. Parents pick them up there again in the afternoons.

Johnson and co-founder Charlotte Cadieux came up with the idea for a camp to expand on the teaching part.

“It started out of the need for children to not just be able to ride a bike physically but to be able to ride safely,” said Johnson, a full-time cycle commuter herself. “…to know where to ride when they ride on the road, hand signals, to know how to interact at small intersections in their neighborhood. It came out of parents’ request to ‘How do I teach this stuff?’” 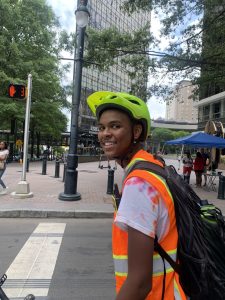 Johnson was introduced to Cadieux, another Charlotte area teacher and biking enthusiast (now program director for the nonprofit Trips for Kids Charlotte.) Together they founded CLT Bike Camp in 2016. They used a local grant to travel to Portland, Ore. to glean ideas from a biking camp there some 650 kids strong.

CLT Bike Camp started with a pilot program of 25-30 kids; now it’s up to 280 campers. Registration, which opens in January, typically fills up by February.

Kids are divided by skill level, starting as young as age 5 in the “First Wheels” division and going all the way up to the most experienced bikers, or “Hard Gears,” who top out at age 15. Campers do clinics each morning, then set out on routes to parks and splash pads around the city. The water parks provide an easy way to cool off from the summer heat, as do popsicle stops on planned routes past grocery stores. 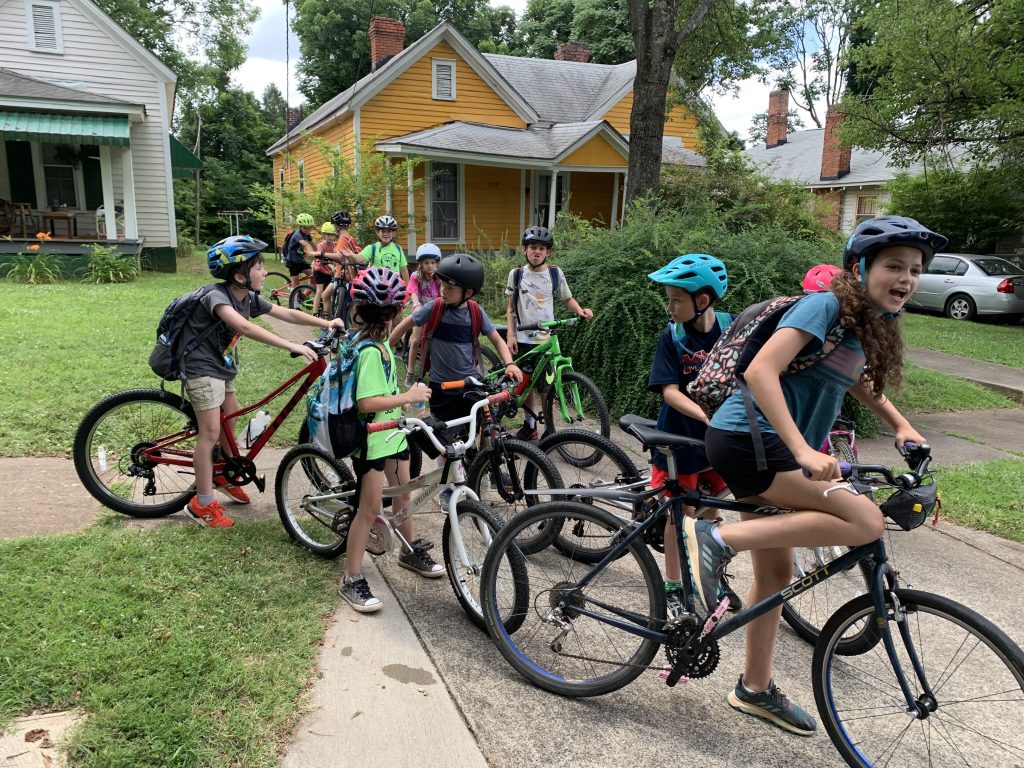 But mostly, Johnson lets the kids come up with their own plans for fun.

“One of the big things bike camp teaches other than bike safety is that it’s important to have time that isn’t scheduled,” Johnson said. “What I usually say is ‘You’re free to do what you’d like within reason, and stay in the boundaries, where you can be seen.’ I think having that space and time is important, especially now after having to be at home for so long (due to COVID.) At the beginning of the week, they actually struggle with it, but by the end of the week they blossom into that ‘Let’s just go play, let’s just go do something.’ I really appreciate that part.” 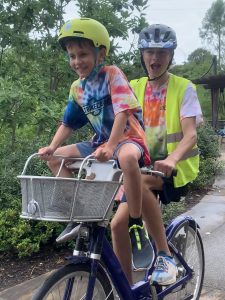 One recent group of campers loved soccer, so they wanted to find parks with good soccer fields. Some of Johnson’s regular stops include Freedom Park, Cordelia, Frazier, Latta, Sedgefield, Huntingtowne Farms, as well as other uptown parks and splash pads. A recent “Hard Gears” camp rode to the southernmost point on the Greenway and visited the President James K. Polk state historic site.

With one counselor as a leader, one as a sweeper, and at least one roving alongside, the youngest riders typically go 6-10 miles a day and intermediates 7-15. One group of “hard gears” recently set a record by riding 102 miles in a week.

“Parents tell me their children are exhausted at the end of the day, but they always want to come back,” Johnson said. “It is challenging. We’re out in the heat and Charlotte is not flat, but it’s an amazing thing to realize you’re 6-7 years old and you just rode 10 miles. That’s a really big deal for kids, and they’re really proud of themselves. And a lot of them don’t know that they can when they start out.”

In August, CLT Bike Camp features a “tour camp” which takes campers on a train ride to Raleigh, a ride out to Umstead State Park and two nights of tent camping before they retrace their path home. In all there are 10 weeks of camp from June through August.

Johnson hopes the camp continues to expand but points out that it takes time to find the right staff with the skills to do what is needed. She’s just begun to hire interns who participated in the camp themselves.

Even if registration fills up quickly again next winter, Johnson hopes parents will just take the idea behind CLT Bike Camp and run with it.

“I’ve been questioned by a lot of people this summer, people come up and say what a good idea it is,” Johnson said. “What’s been on my mind all summer is what a simple idea it is. We don’t offer anything fancy to these kids. We’re outside all day. The most complicated thing we do is tie-dying (camp T-shirts) on Wednesday. Literally all we’re doing is riding to parks and playing. That’s it.”

Campout! Carolina encourages you to get outside and...

Hop to it and get those Easter baskets...

From the Smarty Education Corner and Trinity Episcopal...