I knew signing my 5-year-old up for tee ball would be a rite of passage, both for him and for me.

Baseball was already a game I loved and held in such regard in my previous life writing about the Braves for the Atlanta Journal-Constitution. But now as a mom, to see my first-born son don a bright green Dilworth Little League cap for the first time and trot out onto a field just about did me in. 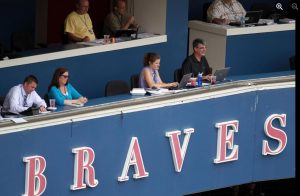 Me in my former life….right above the “V” in Braves in the press box at Turner Field in Atlanta.

It turns out containing my excitement was going to be the challenging part!

I’ve heard for years about dreaded “Little League parents.” No way would I ever be one of those – a parent who let his or her own competitiveness and overbearing behavior ruin the experience for everybody else, especially their child. But man, after my son’s first few weeks of the spring season, I’d be lying if I said I didn’t at least recognize where the tendency comes from!

This probably doesn’t make a whole lot of sense, given my background, but my husband and I had done little to no baseball preparation with Wade. That means hardly any swings, games of catch, or even watching baseball games – on TV or in person. I’m a stickler for bedtime and naptime, which is pretty much when professional baseball is played. And just as importantly, Wade has twin brothers who are 3; rough-housing gives us enough excitement around the house without adding bats and projectiles to the mix. 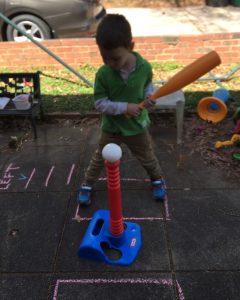 Wade’s rawness was on full display at his first tee ball practice: he walked up to the left-handed batter’s box (he’s right-handed) and attempted to swing cross-handed. It took me about a week and a phone call to Hall of Fame Braves third baseman Chipper Jones’ dad (I told you my excitement level was over the top) to come up with a plan. I created a backyard game – complete with pavement chalk to make tallying fun – to figure out if Wade was more comfortable swinging right-handed or left-handed. (Chipper’s dad was a longtime hitting coach. He explained that hitting left-handed might have been Wade’s natural tendency.)

I’m realizing now, as a parent, that what I missed while watching Major Leaguers for much of my 22 years as a sportswriter was what it looks like in the beginning. I’m impatient. And I have a hard time wrapping my brain around why Wade often seems more interested in kicking the dirt around second base than fielding a groundball hit in his general vicinity.

Thank goodness for Wade’s sake, I’ve had a couple of really strong influences this season. One is Wade’s terrific coach, Tim Bookout, who reiterated from Day 1 that the most important goal for this season was to have fun. The other is my cousin Kathy, a mom to a high school baseball player, who told me in no uncertain terms, that if I put too much pressure on my 5-year-old (by focusing too much on how he was playing the game) I’d lose baseball to him forever. That got my attention. She said if he was enthusiastic about playing and practicing with his friends, that was enough. The rest would take care of itself. He would learn.

So I quit trying so hard to get Wade to “practice” in the backyard. I realized – doh – that being good at baseball isn’t what’s the most fun about playing it when you’re 5, when there aren’t any outs and nobody strikes out. I’ve left the coaching to the coaches – four, including the assistants, all volunteers – and they have been fantastic. Upbeat, patient, organized, on time, prepared. 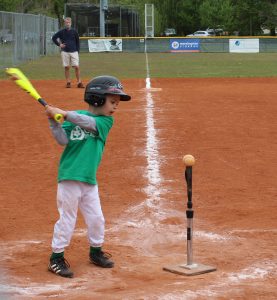 You take for granted how much there is for kids this age to learn, just knowing how (and when?!) to run the bases. They have to be reminded to get their caps and gloves before going back on the field after a turn at-bat. One of Wade’s favorite discoveries this season has been drinking Gatorade!

Tee ball practices aren’t exactly well-oiled baseball academies. But watching our Team Cadieu boys, you couldn’t help but see their progress this season. They went from looking like rugby players diving on the same groundball to a team that spaces out, gets into ready position, and has one player (usually) field and throw to first base.

I noticed the other day how easily and naturally Wade put on his glove. Just a couple of months ago, after we bought him one at Dick’s, I had to help him put it on. He might not have the prettiest swing just yet, but he listens to the coaches, he’ll field a nice groundball for you, and the answer to the most important question all season long – “Did you have fun?” – has been a resounding yes, every single time.

Our team had a practice rained out recently, and the coaches held a voluntary makeup practice later in the week. (how many youth teams actually do that?!) Wade ran happily ahead of me as we got out of the car, which he has done for games and practices all season. I caught up to him just in time to hear three of his new buddies and teammates greet him at the outfield fence.

“Hi Wade!” they all shouted.

Wade might not fall in love with baseball the way I did. But he’s had the best time playing tee ball. And our family has had a ball watching him. We get Bojangles for a pre-game picnic every Saturday morning. The twins love rolling down the hill behind the Field 1 backstop at Freedom Park or chasing their dad around trees at Park Road Baptist Church.

Me? Sometimes I get so wrapped up talking to new mom friends, I miss seeing what Wade did in the field. And for this baseball-loving mom, that’s probably a sign of progress too! 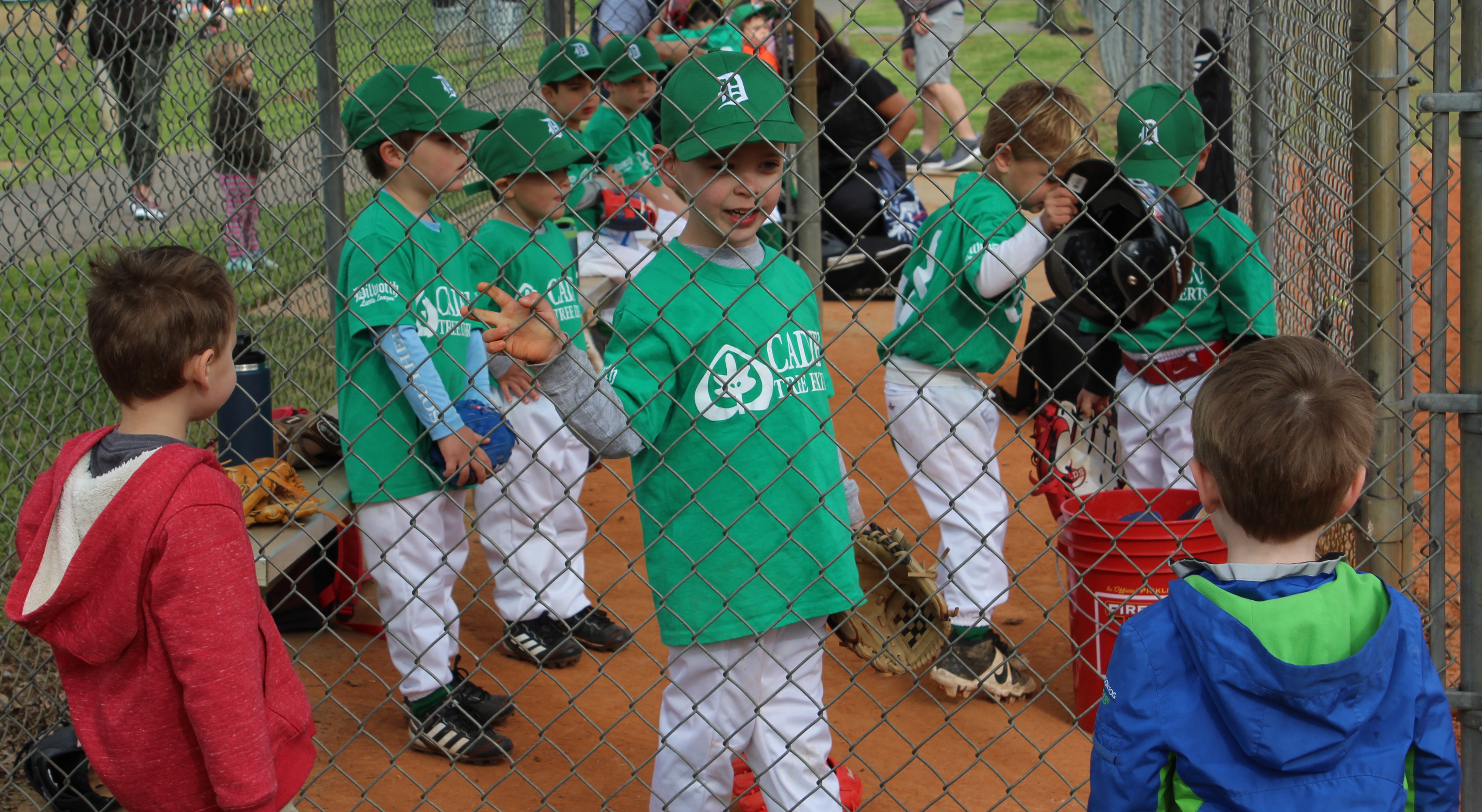 Wade greeting his twin brothers Wes (left) and Johnny from the dugout.

(The league kept tee ball and machine pitch programs dormant last fall due to concerns over Mecklenburg County safety regulations, but kept up its baseball and softball programs for older kids.)

Tee ball will be back in full swing in 2021-22 both in the fall and spring. Registration typically starts in early August and teams are put together in September. Check Dilworth Little League’s website for details.

To be eligible for Dilworth Little League, players must live inside the league’s boundary or attend an elementary, middle or high school within the boundary. 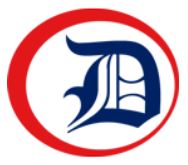 Get jumpstart on college applications at Klaar virtual camp

Smarty Scoop For Weekend Events May 14-16

Give a Session, Get a Session for Flashes...

Does a Disney Cruise count as Disney?

Where to watch 4th of July Fireworks