After more than a year of performing virtually and in smaller groups, the Charlotte Symphony (CSO) is welcoming a live audience back to the Belk Theater tonight for a performance of  Mozart Violin Concerto No. 3. The performance will be the CSO’s first live indoor concert since March 7, 2020. The event is sold out and will have an audience of 250 subscribers, who were chosen through a lottery, but it’s a sign of more in-person events to come. Also, it will be recorded and released virtually in June.

The Charlotte Symphony will host bigger audiences at the Belk Theatre for in-person performances on May 14 and 15 featuring Branford Marsalis. Tickets to those concerts are still available and open to anyone. The audience capacity will increase to 500 patrons each of those nights. 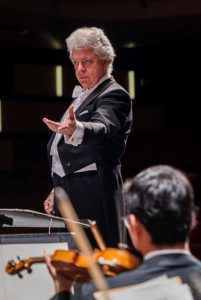 “These performances are going to be very emotional for all of us,” said Music Director
Christopher Warren-Green. “For the past 13 months, we’ve been connecting with our audiences through virtual concerts and in small groups, but I cannot wait to safely reconnect with our CSO family in person – to feel the energy of an audience from the podium again – I’ve missed it so much!”

Tonight Resident Conductor Christopher James Lees will lead the Orchestra
in Mozart’s Violin Concerto No. 3, Strassburg, featuring Simone Porter as soloist and Respighi’s Ancient Airs and Dances. The concert will be recorded and available for streaming June 5–12 aspart of the virtual Classical Series Reimagined.

Music Director Christopher Warren-Green will be joined onstage by Grammy-Award winning saxophonist Branford Marsalis on Friday, May 14, 2021 and Saturday, May 15, 2021 to perform Ibert’s Concertino da camera and Schulhoff’s jazz-inspired Hot-Sonate. The program will also
include Bartok’s Romanian Folk Dances and Gershwin’s Lullaby.

The Charlotte Symphony will also offer Evenings at the Park, a spring classics mini-series
comprised of three concerts (May 7, 21, and 28) at Symphony Park. The concerts, conducted by
Christopher James Lees, will feature works inspired by nature and the outdoors, such as
Beethoven’s Pastoral Symphony and Ravel’s orchestration of Debussy’s Danse, a work based
on the tarantella — a lively folk dance believed to be named for the movements used to work out
the venom from a tarantula bite. The series will also include Kathryn Bostic’s Portrait of a Peaceful Warrior – a work the composer describes as “a tribute to the vast and diverse voices of humanity coming together to stand up for justice, equality, inclusion, and human rights.”

The Charlotte Symphony will continue to offer streaming tickets to the Classical Series
Reimagined and will present five in-person outdoor concerts at local breweries, as part of the
popular On Tap series.