It’s like the organizers at the Sea Life Charlotte-Concord aquarium were reading my mind. Somehow they knew just what I needed this month, staring down another wintery stretch of few places to go and not much to do with three young sons. Their “Little Sea Stars” program for toddlers that runs through February 25th is aimed at pleasing tots but sure pleased this mom in the process.

Sea Life is offering one free child ticket with the purchase of an adult ticket during this promotion. (Adult tickets are $15 apiece, and additional children ages 3-12 get in for $5. For details, go here.

Here’s what you get: Sea Life opens an hour early, from 10 a.m. to 11 a.m., on Monday-Thursday, so your little sea stars can have free reign. With 3-year-old twins, being able to give a little freedom to roam around safely, was key. 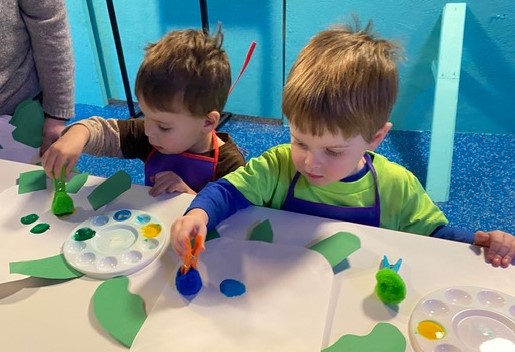 The program features Story Time, a crafts project, sing-alongs and other aquarium activities. For us, that meant the chance to sit cross-cross apple sauce with my twins on a circle-shaped rug for Story Time, something we used to do all the time at the library but have had to give up during COVID. Johnny and Wes get stories read to them all the time at preschool, but I’m not allowed anywhere close to see it.

The crafts project was a huge hit with my two. They got to dip fluffy balls in paint and dot spots on the back of their own sea turtles. The project wasn’t something just thrown together either. It was cute enough to hang at home, which we did on the end of Daddy’s wardrobe because he loves sea turtles.

Clearly, we were having a big time before we even got inside the exhibit area. Johnny and Wes have been itching to see the aquarium since October when their older brother Wade, 4, got to go to the Spooky Seas Halloween exhibit without them. Seeing the sea life for the first time had them wide-eyed and giddy. Just seeing fish in their favorite color – yellow for Wes and blue for Johnny – was enough to get them excited. 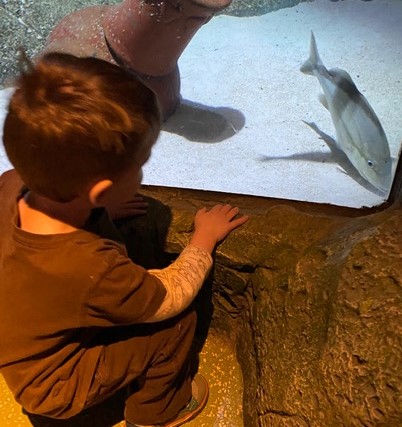 They kind of surprised me by zooming through the underwater ocean tunnel – one of the highlights at Sea Life – but then again, they do pretty much everything at a break-neck pace these days, and it was nice they didn’t have to ogle over sharks to be excited. We actually spent more time around the smaller exhibits.

When I asked them afterward what their favorite creatures were to see – one said the jelly fish, which was a cool and psychedelic exhibit, and the other said the giant spotted fish we saw in the tropical ocean exhibit. It was a good reminder that small children find comfort in small scale. They loved the chance to duck under the smaller tanks Sea Life has with special viewing areas for children where they can pop back up into a viewing area in the middle of the tank.

My only criticism would be that the information posted on the walls to identify what’s what in each tank isn’t especially well lit, so it was hard to keep track of what you’re seeing. Part of that was probably that I was more focused on keeping up with two young boys, though, and a phone flashlight probably would have taken care of the problem. I realize keeping the aquarium dark is for the benefit of the sea life. 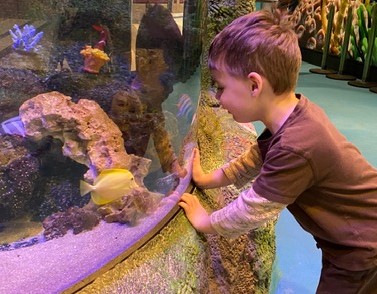 Sea Life is such a great size, though, for young children, and honestly going through the aquarium for a second time as a parent was a lot easier and we enjoyed it even more. I’d learned the layout and scope of it, so we could pace ourselves a little better. And on my second trip, I learned that while flash photography isn’t allowed, you can use the flashlight feature on your phone if needed to add some lighting.

Being at Sea Life in the morning meant that it wasn’t super crowded, which made it easy to stay socially distant. It’s conveniently located at Concord-Mills shopping center, so parking is a breeze and there’s a food court right down the mall with lots of great options for kids. And did I mention there’s a carousel in the middle of the food court? Bonus fun for the whole family.

All the adults at the aquarium were in masks. Children under 5 aren’t required to wear them, which is actually good news for my 3-year-olds because they struggle to keep masks on long enough to pick up a few groceries. But we still felt safe having my masked-up 80-year-old mom touring with us that morning too. It was a fun memory-maker all the way around.

And FYI, the aquarium offers date night possibilities too. Sea Life is running a “Sweetheart” deal on Feb. 12, offering a buy-one get-one-free admission from 5-8 p.m. 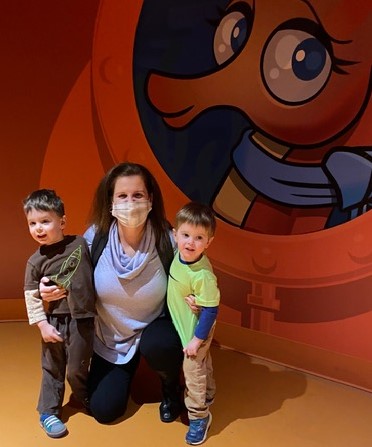 From the Smarty Health Corner & CEENTA: All About Hiccups

MINEFAIRE, a MINECRAFT fan experience is coming to...