New Year’s Resolution: Work out with your kids?

Until stepping on the scale a few weeks ago, the idea of exercising with my children never really dawned on me. It didn’t seem plausible.

Sure, there are sweet little mommy-and-me yoga classes you can do with an infant, and I did a few. Running with a jog stroller is a great option, but it doesn’t last. The kid gets bigger – and heavier – and sometimes he’s followed by another kid, maybe two. Then, if you’re lucky enough to have someone watch your older kid, while you push twins in a double jog stroller, they manage to get bigger too and want out even sooner, to be like their older brother.

As a mom of three boys, 4 and 3-year-old twins, I’m caught in that purgatory between the jog stroller and the Greenway bike rides I envision someday. Childcare at the Y is not an option right now, so my strategy lately has been to run three mornings each week before my husband leaves for work…and wait for the kids to get to elementary school.

The problem is – judging by the scales and the stress-eating I did in 2020 – it’s not enough. So this mom has kicked off the New Year on a diet and determined to find ways to exercise with my boys, even if just for a few minutes here and there. It’s better than nothing!

The concept sounds great: spending time with your littles, getting their wiggles out and a little work-out in for yourself at the same time. Much to my surprise, a quick search on the internet found tons of video options. Hey, people actually do this. It must work! Right?

Searching “family workout” videos, I came to one from PopSugar Fitness that looked good. The studio was light and bright, the family spaced out neatly on mats, with the trainer in pink star leggings and just the right amount of pep. I gathered my boys around the playroom TV the next afternoon, and we gave it a go. 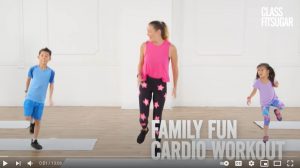 The boys were totally on board with the skipping. Balancing on one leg was a hoot. The hopscotch exercise got their attention. But by the time we got to the squat challenge, they were done. They watched me from the floor. The whole video was about 13 minutes, and it was too long. Before it was over, Johnny, one of my 3-year-old twins, ran up to his bedroom to retrieve his pillow, blanket and stuffies. He wanted to veg out on the floor and watch “Pete the Cat” instead. Yeah, Johnny, that looks pretty good to me too.

I goofed by picking a video that was too much, something they might do when they were older, but not now. That was confirmed the following afternoon when I tried to talk the boys into doing another exercise video; I got moans and groans.

I still managed to get them in front of the TV to scan more videos, and I found one called the “Frozen Workout” that got our attention. “Frozen” was their first full length movie, and just because they are boys doesn’t mean they didn’t love it! I also thought seeing a character in action might help. The video features a woman dressed up in a flowy dress, heels and an Elsa wig, standing in front of frozen scenery, and using video magic to shoot icicles out of her hands while doing the “Elsa Blast” or the “Let it Go” squat. 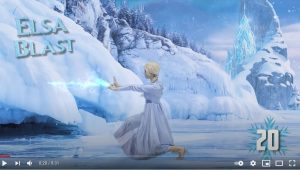 The workout, supposedly for kids but works for mom too, is a series of squats and arm movements. It’s not the most intense (she’s in heels, as I said) but your heart rate goes up and you can definitely feel it in your legs. My other twin Wes, who loves Elsa, got up and did some of the arm motions. The music is upbeat, so eventually both twins got up and started jumping off a nearby chair onto the floor. I counted that a victory. I was getting some exercise, so were they, and nobody was running out of the room or tussling with each other.

I tried one more video to see if I could engage my 4-year-old, and I did get him mentally on board. I picked a video called “Zookeeper Fitness: Guess the Animal Sound.” It would play a real-life animal sound, then the screen goes to three smaller videos of people doing corresponding animal-like movements. You pick the movement that goes with the animal sound you thought it was. My son was big on guessing and watching me do the movement, and it was surprisingly challenging and fun to figure out what the sounds were. It was fun, and the exercises were legit (burpees included!) Again, I counted it as a win, even though the boys weren’t doing the exercises with me. 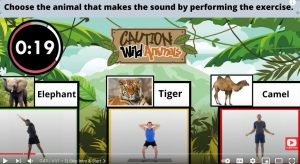 What I discovered was getting exercise with my boys is a work in progress but it is possible, even if it’s only an occasional video (next I want to try one with the Hulk and Spider Man) for 10 minutes a pop. Just trying out a few has gotten the ideas flowing, and in my back pocket, is the fact that it’ll be easier when the weather gets warmer.

For now we can rake leaves, play some chase and take nature walks. In the spring, we’ll get out the sidewalk chalk out and make an “obstacle course” like we did early in the pandemic, only this time, I’ll take part in the leap frogs, hopscotch and jumping jacks. We’ll play catch and get the soccer ball out, and I’ll chase down the loose balls.

In the meantime, I’ll keep trying to challenge them to do sit-ups or planks and continue to ask my 4-year-old Wade to show me the yoga moves he’s learning in preschool. The “Santa Claus” pose is super cute, especially when he’s giving me the instructions: “Breathe out. Ho! Ho! Ho!”

My goal from here is to be open to possibilities, create variety, and not expect the perfect 30-minute workout. I’ll be grateful for a little burst of energy here and there, and another way of making memories with the boys. Because now that I think about it, I have vivid memories of sitting on my mom’s feet as a little girl and counting for her as she did sit-ups after my younger brother was born. And I remember it because it was fun. 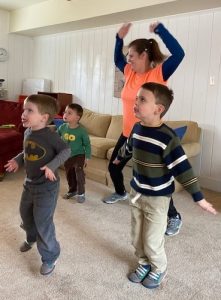 Smarty Giveaway: Win a Year of Simplicity ~ Decluttering Your Home & Life in 2021!

From the Smarty Education Corner & The Fletcher School: Parent workshops to support your child with learning differences

Is RSV really as bad as it sounds??

Talking to Children about Touching Safety

Remote Learning Design: Advice from a Pro (and...