Coping with death of loved one while parenting young kids

Next blog, I’ll get back to potty training and consignment sales, mama commiserating and playdate planning, but for now, I have something more serious on my mind that I feel like I need to get out. With all that’s happening around us with the coronavirus, the gravitas feels kind of fitting anyway.

As a card-carrying member of the sandwich generation, I’ve learned over the past year about the challenges of caregiving for both an elderly parent and young children. Last month, that challenge changed, when it came time to walk my children – and myself – through Dad’s final days. I thought I might share some of what I learned for others going through the same thing.

My dad was 81. His death felt both expected and sudden. Dad had cognitive impairment, which meant his memory was declining, and we’d been saying goodbye, on some level, for a while. Then one day in mid-January he got the stomach bug. Then he took a fall. Then he came down with pneumonia. In a matter of two weeks, using only comfort measures as per his wishes, he was gone.

Looking back on it now, the part I was probably the least prepared for (besides everything, as my best friend says) was how to talk about it with my kids. We have three boys, twins who are 2 and a recently-turned 4-year-old. Wade, our oldest, was my biggest quandary. He was closest to my Dad and comprehended a lot more. 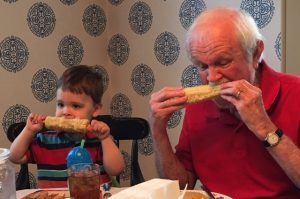 My first instinct was to shelter. To shield. To be honest in as age-appropriate a way as I could muster, but to keep conversations short and interactions between the boys and my father at arm’s length. They made some drawings. Wade picked out flowers at Costco. I showed them photos of how it all looked displayed in Dad’s hospital room. That was as far as I was going to take it.

My other agenda was to gather intelligence from trusted sources on what to say when Dad died. I’ve got tremendous teachers, pastors and friends who helped me with this. But what I learned in the days and weeks to follow was that planning for one conversation about death wasn’t enough. Dad was dying, and it was ongoing.

I was going to the hospital every day or so, for hours at a time. Wade knew “Coach” – as his grandkids called him – was sick, but sick in the mind of a then-3-year-old means a day or two in bed, watching a lot of Paw Patrol on the iPad.

Wade exposed the flaws in my grand plan one afternoon when he asked if we could go to Coach’s house and have dinner once he felt better. Wade loved going to visit my Dad at his assisted living facility and giggling over a plate of hotdogs and French fries and a bowl of ice cream. The two of them were such a perfect pair – a 3-year-old and an elderly man, who was struggling with short-term memory.

It didn’t seem fair to let Wade go on thinking “Coach” would get better. But taking him to the hospital seemed like too much. In fact, it didn’t even enter my mind until my stepsister asked me one day if I was going to bring the boys to see Dad. She has two sons, a 7-year-old and a teenager.

I was letting that ruminate when one of Dad’s hospice nurses (total angels, as you know) who’d seen a picture of our sons at Dad’s bedside, asked me if I was going to bring them. She didn’t seem fazed by how young they were in the photo. 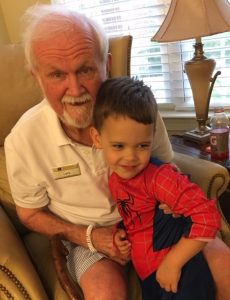 She said the hospital waived age restrictions on young visitors during flu season for relatives of hospice patients. They could wear masks and use an entrance close to the hospice unit. That was the first time I actually visualized Wade walking into Dad’s room. (Twins were still too young in my mind, and I haven’t wavered from that.)

About that time, we were considering bringing my Dad home to my sister’s house for the end (a choice we ultimately didn’t have to make.) She lives a mile from us. We go there a lot. There would be no avoiding in that scenario.

I got on Google. I found article after article advising how to handle interactions between dying relatives and young children. Nobody was advising against them, only how to handle them. The experts pointed out that it was an opportunity to show young children in a gentle and loving way that death is part of life.

As a parent, they said, you can show your children how to grieve. And maybe one day, when your child faces someone else’s death, it won’t be quite so scary and awful and something they should make every effort to avoid. That got my attention.

So, one morning, in a quiet moment, I broached the subject with Wade.

“You know how Coach is sick?” I said.

“He is so sick that he is not going to get better,” I continued. “I have been going to the hospital to see him, to let him know how much we love him and to say goodbye. Would you like to come with me some time to visit him at the hospital?”

The articles all said you need to prepare your children for what they will see and experience. One way is to show them pictures. So, I showed Wade a photo my sister had taken of Dad in his hospital bed holding a football (he used to be a volunteer kicking coach at Myers Park High and later Country Day.)

“Coach sleeps a lot,” I said. “He doesn’t always say something back when you talk to him. But I think he can still hear us. And it helps him to know how much we love him.”

Wade took it all in, while I held my breath. Finally, he said, “I don’t think I want to go. Maybe next time.”

I exhaled. I had done the legwork. I didn’t actually have to go through with it. But then, a day or two went by and to my surprise, Wade came back to me and said, “I think I do want to go see Coach at the hospital.”

He had processed it.

A day or two later, we went. I packed one of our favorite books “Wherever You Are My Love Will Find You,” by Nancy Tillman. I explained, in the car, how he’d wear a mask in the hallways, kind of like his PJ Masks Halloween costume.

We walked through the hospital room door hand in hand. The room was quiet and peaceful. Dad was sleeping. I pulled a chair up to his bedside and sat Wade on my lap.

I said gently, “Dad, it’s Carroll. Wade is here with me.” He didn’t respond. I suggested we get out the book. When I reached for my purse, Wade grabbed my hand. I asked if he wanted us to say a prayer. He shook his head and said no. Before I could formulate my next suggestion, Wade shushed me. He didn’t want me to disturb Dad. That made perfect sense.

I told him I was going to pray anyway. I bowed my head and said a short prayer, thanking God for Coach and all he had done for us. Then I asked Wade if he wanted to give Dad a fist bump or a high five (as was their practice, along with a hug and a kiss.) He declined. So, I put Wade down, gave Dad a kiss on the forehead and told him I loved him. 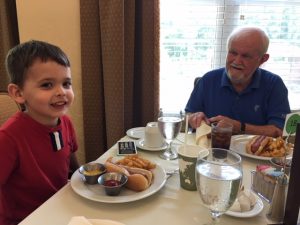 “Love you,” he mumbled quietly.

As we walked out the door, a social worker magically appeared and offered Wade a stuffed animal. It was just the tension-breaker we needed. (The people who work in hospice units are so, so amazing.)

When we got out to the parking deck, where it felt like the pressure was off again, Wade looked up at me and said, “Mama, I love you.” In that moment, in those words, I had some sweet little confirmation that we’d done the right thing.

I’m not saying Wade truly understands what happened with Dad. But hell, I’m not sure I do either. What I do know is that I’m so grateful we had that visit together. As it turned out, that “Love you” was the last response I ever got from Dad, who died five days later. I’ll always cherish that Wade was with me to hear it.

In that moment, together, we got a chance to say goodbye, and what a gift that is.

From the 2020 Smarty Summer Camp Guide: Summer at Matthews Playhouse

Carroll, this is the BEST post ever on this site. I am bawling crying right now. What a wonderful experience you had with Wade and “Coach” and I feel so honored you shared it here. Sending you big, big, big hugs. I know how hard it is firsthand (with my mama five years ago). Still miss her every single day.

Thanks Jen!!! Still wish it weren’t real! Thank for your the kind thoughts and for giving me such a great platform to let my thoughts fly. Sending hugs to you!!! Know your mom is so proud of all you do!!

Beautifully written. I love the pictures of Wade with Coach. You are one amazing mama obviously raised by an amazing dad.

Thank you Paine. Love you, lady, and thanks for all the love and support of Wade and me, through this ordeal, and always.