Potty training confirms: No such thing as cookie-cutter parenting

Veteran moms try to tell you this when you’re getting ready to have another baby. “Every child is different,” they say. “You won’t be able to parent them the same.”

They say it nicely, so as not to sound condescending or to scare you. If you’re like me, you let it go in one ear and out the other. “Yeah, yeah,” I thought. “I’ll figure it out.” I was pregnant with twins. I had other stuff to worry about.

Two-plus years later it has finally sunk in. I got a crash course over the holiday break. My four-day test case? Attempting to potty train 2-year-old twins the same way at the same time.

My “Oh Crap! Potty Training” guru says you should never admit to anyone on social media that you’re potty training unless you are finished. Otherwise, you’re going to get a bunch of unsolicited advice that will break you down. I’m pretty sure she (Jamie Glowacki) would be anti-blog too (LOL) but I have one due, and what the heck else am I thinking about these days? Not much. 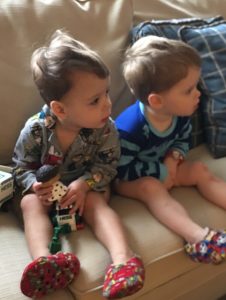 My plan was to use the break from preschool to potty train our 27-month old twin sons. I was originally gunning for the MLK holiday weekend but both boys have shown some interest, and I wanted to jump on it sooner rather than later. I dragged my feet with my older son, who’s almost 4 now. I trained him a few months past 3 and paid for it in mind games. This time I would knock it early and at the same time.

Some twin moms will tell you they potty trained separately, in large part for sanity. Some do it together, just to get the hell through it. I was in the latter camp, and I’m already one of those twin moms who loves two for one. My boys do pretty much everything together, meals, sleep, play, etc. When somebody offers to take one on an outing, I’m selfish. Like what’s the point of that? It doesn’t give me much of a break.

When we set out to potty train both, my husband tried to warn me. One of our boys is usually content to let his brother do the experimenting and learn things on his own time in his own way. But I wanted to follow Glowacki’s advice and start both at once. She says in many cases parents underestimate the one they don’t expect to do as well.

Glowacki also says it’s not unusual to put one twin back in diapers for a reset during the process, and that it’s totally fine to do so while you focus on getting the early achiever all the way through the process. She just said to give it at least a week. I made it four days.

Our “out front” twin seemed to get it from the start. On Day 1 of “potty boot camp” where you strip them down and let them run around the house while you help them figure things out, he was taking himself to the potty, telling us about it the whole way. The other twin would go to the potty, but only when prompted. He was doing fine, but accidents were fairly common. I kept my cool for three days, making the most of the extra snuggles and time spent nesting at home. On the afternoon of Day 4, I lost it.

It was New Year’s Eve, but in my little world, the day was marked more for being one of my worst as a mom. So far anyway. Sleep deprivation, tandem breastfeeding, dealing with stomach bugs – none of that had ever given me the pit in my stomach I felt that afternoon, wondering where my grip had gone.

While I attempted to get my struggling potty trainer to sit on the potty, my other two boys basically ran rampant. I think my oldest was acting out because I’d been so focused on his brothers, and all of us were way too cooped up. My other twin was just following in his older brother’s wild-acting footsteps, and thankfully, making his own way to the potty in spite of me.

The house was a mess. I was a mess. And by about my little guy’s third accident – mercifully just pee but disheartening because they came moments after he’d gotten up from the potty – I started to cry. I didn’t stop until my husband walked through the door about 30 minutes later, asked me what was wrong, and I let the last of it out.

Our little guy had two more pee accidents with my husband watching, including once on my lap. That night, we decided to put the diaper back on him. I’ve never been more relieved.

Quitting is not my style. Hanging in there is one of my things. Hell, I dated my husband for eight years before he proposed. I’ve run two marathons. I covered 162-game baseball seasons as a sportswriter in my past life. But on this one, I waved a giant white flag.

When the dust settled and I really started to think about how the previous four days had gone, I had to admit: doing the same thing at the same time for two different boys just didn’t work on this one. This wasn’t packing a lunch or putting on matching pajamas. Each son has his own needs and his own way of learning. It’s past time I start appreciating that.

So we’re taking a break from training one twin, while we focus on the other. In the meantime, I’m trying to open myself up to fresh ideas for when we start again. I have no illusions it’s going to be any easier, but I do know it will need to be different. A cookie-cutter approach isn’t going to work.

And here I sit reminded yet again – like I was with my oldest son – that potty training isn’t just about teaching your child. It’s about learning as a parent.

Stick your Head in Poo Poo

Smarty Movie Review: ‘Everything Everything’

All Dad Needs Is…

Gahhhh, hang in there! I’m also a 2-for-1 twin mama and potty training just wasn’t my strong suit. One eventually literally taught himself – probably because he was long overdue. Let me remind you my twins were #’s 3 & 4, so I wasn’t so focused on milestones and I was perfectly content with pull-ups (which were also a big no-no in potty training). When the first one figured it out, the other was so distraught that his brother was doing something new, he followed suit immediately. Now I’m not gonna lie, I’m sure my neighbors were horrified with all of the peeing in their bushes – but what can you do? I just pretended I didn’t see them doing it!!