I had a good friend tell me once that, as a mother, days would be long but the years would fly by. Wow, was she right! We celebrated my son Wade’s 3rd birthday last week, and it served as a vivid reminder of how fast all this is going.

But maybe on this particular birthday – 3 –  that’s not all bad, right? It means the “Terrible Twos” are over.

Yay for Mama and Daddy! We survived the gauntlet of our toddler starting to flex some independence, whether it’s taken the form of tantrums, parent-toddler standoffs or a steady stream of messes.  (As I type this, I’m looking through scraggly lines of ink pen where Wade drew on my computer screen. I’d left him quietly watching “Pete the Cat” on a TV across the room.)

We have had our moments.

My sweet and generally mild-mannered first born (he has twin brothers who are 16 months) can turn master manipulator with the flip of a switch. It’s usually the light switch, at bedtime, when Wade can render his Type A, not-afraid-to-sleep-train, keeper-of-the-schedule mother into a raging lunatic with a litany of oddly convincing requests.

Is it just me or do 2-year-olds seem to have their own version of PMS? Wade cried to the point of being inconsolable one morning after I broke off a piece of his banana – I can’t remember if the piece was for him, me, or one of his brothers – because he had decided he wanted a “big one” (translation: the whole banana.) I got more of the same another morning after I committed the sin of stirring his oatmeal, thereby creating “a hole” in it.

But really, in the grand scheme, this 2-to-3 transition hasn’t been all that bad. The tantrums, luckily, are few and far 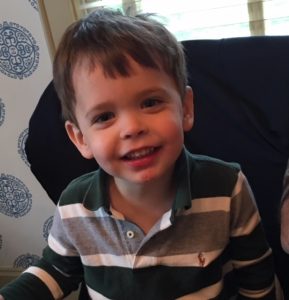 between and usually happen at home. The messes clean up, albeit some more easily than others. And the frustrations subside, usually when accompanied by some sleep.

If I stop, like I did last week, to really think about the past year, and all the ways Wade has grown and changed, I realize the twos have been pretty darn amazing, actually.

In a year’s time, Wade has gone from saying simple words and phrases to reading “Goodnight Moon” to his twin brothers. (Granted he’s going from memory, but still.) He can order his own breakfast from the waitress at our favorite restaurant and then eat a plate of scrambled eggs, grits and bacon without any (or much) assistance from me.

Wade can put on his own coat, if he lays it down on the ground and flips it over his head. He can pull down his pants, pee in the potty – we are still working on full time (I know. Soon.)  – and flush it ALL BY HIMSELF. I write that in all caps because that’s how Wade says it.

ALL BY MYSELF is one of Wade’s favorite phrases, as is the concept of having favorites. Wade loves to tell us what he likes and dislikes, and it can change from one instant to the next, sometimes depending on the time of day.

Wade went through a big cow phase. Lately he’s been more into owls. So his father and I have been loading him up with books, stuffed animals and trinkets for his room – all of which he loves while the sun is up. But at night, they scare him. The cow painting has to come off the wall and be put away in his closet. The stack of owl books and the stuffed animal have to spend the night in mommy and daddy’s room, where they’ll be safe to read and play with again in the morning.

But it’s cool to me that Wade knows enough to have fears now. He has such a deeper understanding of so many things. He’s learning about the holidays; trick-or-treating and Santa Claus were an absolute blast this year. He will talk about the future, whether it’s how he wants to drive a digger one day or have friends to a pool party this summer. (He is making his own friends now, and not the kind I make for him on playdates.) We’ve also started to read, sing, and talk about God.

Wade and I have our own inside jokes. I kid him about the way he pronounces the word scissors “suhzuhs” and he laughs at me, when he has to repeat a word I can’t understand. He’ll tell me what’s bothering him when he’s sick, which was huge the night we pulled an all-nighter because of an ear ache that he then passed on to his younger brother. 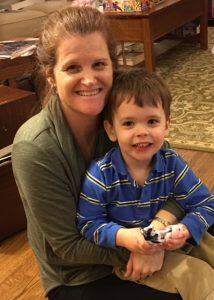 In the past year Wade has learned to tell me he loves me, and what is better than that? He’s also learned to say, rather abruptly, “Mama, you’re not my friend anymore.” It was a jolt the first time he said it, but my skin has gotten a lot thicker lately, especially since he says it every time I wear a zip-up jacket around the house. He thinks it makes hugging me uncomfortable, which we do a lot (told you he was sweet). Also, at some point over the past year, Wade switched from calling me Mommy most of the time to Mama because I told him I liked the sound of it.

He’s become a little human being, and I gotta say, it’s been really cool.

I should probably also concede there’s a chance I’ve gotten really lucky with the “Terrible 2s” and the super hard stuff is still coming. I’ve heard some moms say the 3s are even harder than the 2s. Even so, I figure I better go ahead and embrace the 2s. The next time I go through them, they’re coming in duplicate. The twins turn 2 in October!

Get your tickets to Charlotte Youth Ballet’s Spring Production: ‘Cinderella’

My Gym’s biggest camps of the year are...

Flying with Kids out of Charlotte on USAIR