Smarty Note: This review was written by Smarty Caris Malone. 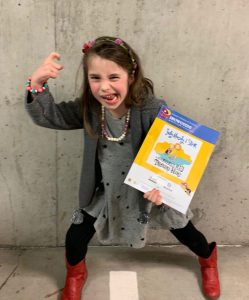 Theatre of Charlotte performance of Judy Moody and Stink: The Mad, Mad, Mad, Mad Treasure Hunt brought an afternoon of education and laughter. The audience was filled with all different ages, which meant all different kind of laughs, and all at different times.

As we know our beloved heroin, Judy Moody, is rather moody. One minute she is growling and the next she is ecstatic. As a parent of a 6 and 3 year old, this behavior is somewhat normal in our house. It was such a delight to watch my 6 year old experience just what this kind moodiness looks like; with each growl or stomp I got some big eyed glances from my girl. It becomes apparent that the reason Judy is in a bad mood is actually because she is feeling uneasy about the start of a new school year. She is sure 3rd grade will be the WORST! To top things off she knows everyone’s summer vacation was WAY more fun than hers and she’s sure everyone will have a “t-shirt with words” it. Totally unfair! Her parents come up with a brilliant plan to lift her mood with a trip to a pirate island. Judy might not be totally sold, however her band-aid stealing little brother, Stink, thinks this is the best news EVER! Good thing Stink has his survival pack, because once arriving the brother and sister duo venture out on a treasure hunt that will get Judy her “t-shirt with words”. 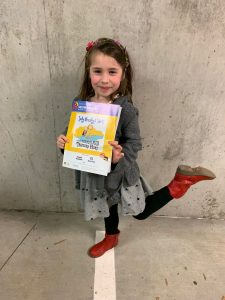 As parents we think having a sibling for our littles is the best, Judy reminds us that this isn’t always true. Especially when you have a brother that steals your band-aids, gets lost and gives clues to other treasure hunt competitors. To make matters worse she is on strict orders from her Mother not to separate from her brother, Stink. Judy is sure this is a recipe for disaster, until her little brother actually saves the day by using his trusty Morris Code book from his survival pack! Judy is just starting to think that little brothers aren’t too bad when she loses him! After a fantastic daydream filled with exaggerated southern charm, Stink pops up from the table he was hiding under, and all is well in the sibling world once more. The duo works together to figure out the challenging clues, all while uplifting each other along the way. It was a happy parent moment to see this relationship unfold; it gave me hope for the future.

After a spooky walk through the pirate graveyard, and slow motion battle scene Judy and Stink find the last clue! But are they the first? Will Judy get her coveted t-shirt?! You’ll have to find out for yourself!!

My little smarty was so excited to go home and tell her little sister all about the Judy Moody and her brother Stink and the awesome treasure hunt. As soon as we walked through the doors she grabbed her hand and headed up to the playroom to make their own treasure hunt; pirate hats, swords and all.
Thank you CTC for another inspiring performance filled with education and lots and lots of laughs!!