Home Education Choosing pre-school is a big deal too
EducationParenting

As a new mom, I knew there were big decisions coming about education: public or private schools, magnet or charter. Should we rely on my husband’s background and go Catholic?

How would we figure out what schools were right for our kids and once we did that, how in the heck were we going to afford college, especially the one I love the most (that also has a pretty damn good basketball team this season?)

I always thought I’d have time to figure it all out, at least until our son Wade got to the brink of kindergarten, right? Then I’d have 12 more years to teach him a sport to get him that free ride to college (wink.)

It never really dawned on me how important a decision choosing a preschool would be. That’s because I’d never really thought about what it would feel like to let go of his little hand in the morning and turn him over to somebody outside of our home, even if only a couple of times a week, a few hours at a time.

I always figured we’d put Wade in preschool at some point. It’s what my friends did and my mom encouraged. Then shortly after Wade turned 1, I found out I was pregnant with twins. Choosing a preschool went from an abstract idea to the top of the to-do list.

Lucky for me, I all but backed into an amazing preschool. When I moved back to Charlotte in 2014 – I’m one of those rare people who actually grew up here – I joined First Presbyterian Church in uptown Charlotte, largely because of its dynamic pastor (Pen Peery) and traditional service (I’m old school.) Only after joining a women’s circle and finding out about the First Presbyterian Weekday School from other moms did I realize I had one of best preschools in Charlotte right under my nose. 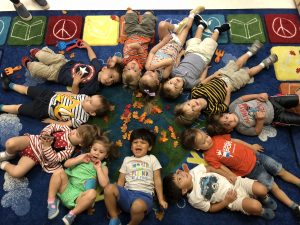 I’m not one of those people who like to cast a wide net. It’s not my nature to interview 10 nanny candidates or tour 10 preschools. I like to make decisions on gut and faith. If some place, or somebody, feels right to me, then I go with it, and that’s how it went with First Presbyterian.

The Weekday School was the first of two preschool tours I went on, and the second one never really stood a chance. The professionalism of the First Presbyterian staff members got my attention, as did their thoughtfulness in answering every question and concern. Then walking the halls and seeing children’s names, photos and adorable artwork on their cubby holes outside each classroom just did me in. By the time we heard one teacher roar as she read her rendition of “Brown Bear,” Wade’s favorite book, it felt like a sign.

I knew I had to do my due diligence, so I visited a preschool much closer to my house, one that a neighbor had recommended. It was a perfectly nice place. It would have made a lot more geographic sense, especially with our twins on the way, because I would need only five minutes in the car each way, instead of 20. But after I did the tour and asked the questions, the only advantage it had on First Pres, to me, was convenience. And was that really what I was going for?

I weighed the pros and cons for a week or two until a chance conversation with a mom at another church here in town sealed the deal. She told me she had sat on the board of the preschool at her church and still sent her child to First Presbyterian.

Wade is in his second year at the Weekday School now, and before this month is out, I’ll be registering both him and his 1-year-old brothers for next fall. (Believe it!)

(Here is my quick aside: I’m a stay-at-home mom who does some freelance writing on the side. I know I’m fortunate to be able to stay home with my boys. I’m still a huge proponent of preschool, though. It allows you precious time to get things done, whether it’s for part-time work, spending time with younger children, running errands, doing housework (yeah, right), getting a workout and a shower, going to a doctor’s appointment, or spending an hour at Starbucks staring at Facebook (now we’re onto something.) 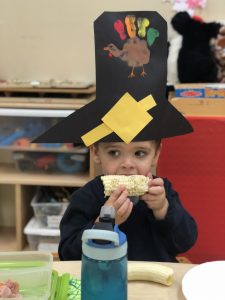 Whatever you do with the time is valuable because it gives you a chance to decompress, and recharging is so good, I think, for your relationship with your children – and everybody else, for that matter!

As for the kids? Preschool gives them a chance to learn independence, to take part in activities you can’t recreate at home, or would rather not anyway. I know in my case, I love all the arts and crafts projects Wade does at school, so we can avoid the mess and hassle at home. (Hey, I’m a better mom about music and reading than playdoh and paint, I fully admit.) When he’s at school, Wade gets a chance to roam around a playground – or the rainy day room when the weather is bad – which means he gets his wiggles out regardless of whether we have time to get outside later in the day.

And what I’ve discovered too is that Wade is learning things I’m not all that great at articulating: understanding what certain holidays are all about, the value of cleaning up after himself, how to be respectful of others and build friendships with his classmates.

For going on two years now, I couldn’t be happier with the choice we made to send him to First Presbyterian. I have loved Wade’s teachers, the overall energy and spirit of the school, the way he has taken to all of it, the interaction I get with other parents, the whole shebang. The problem now is I have no idea how I’m going to match this standard in all the other educational decisions yet to come, now that I know what it feels like to feel really strongly about my child’s school. Guess that’s another blog for another day.

For now all I can say is, as preschools across Charlotte open up for registration for next fall, my two recommendations are these: 1) say YES to preschool. Do it. Even if you look at your sweet baby now and can’t fathom that he or she will be ready next fall. He or she will! And 2) when you choose a preschool follow your heart! 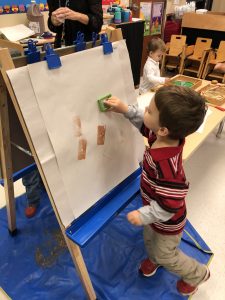 From the Smarty Health Corner and CEENTA: Children’s...