This blog was supposed to be about the “snowstorm” we had in Charlotte last weekend. My plan was to breeze through 800 light-hearted words, while confessing my most recent mom fail of not having my three sons properly outfitted for snow. (If you look closely at the 2-year-old in the photo, you’ll see skin where mittens should be.) I figured I’d poke a little fun at myself and search online for some children’s winter gear while I was at it.

Then I spent the morning at the Novant Breast Center.

Wade decked out to play in a little bit of snow.

It’s been 10 days since I got a call that I needed a follow-up mammogram, and in that time I’ve done a pretty good job ignoring the implications, which isn’t all that hard to do when you spend your days chasing three boys under the age of 3, including 14-month-old twins.

But sitting down at the computer tonight, I didn’t think I could ignore it anymore. Not if I’m being honest with myself, and honest with you.

I was sitting in the church library at my son Wade’s preschool, trying to get some writing done, when Novant called to tell me I needed to come in for another mammogram. (I’d just had my first routine mammogram since before my three sons were born. Screening mammograms aren’t recommended when you’re pregnant or breastfeeding, and the boobs and I have been busy.)

I have a cousin who is a breast cancer survivor, so I’m familiar with the slippery slope. One call for a follow-up mammogram becomes one biopsy. Next thing you know you’re having chemo, radiation, surgery, reconstructive surgery, and if all goes well, and you’re lucky, you get your life back.

When you’re a mom and you get a call like that, all logic, rationality and calm goes out the window, at least it did for me. All it took was one little sliver of a doubt to creep in, that I might….actually….have….cancer and not be able to be there for my sons, and my stomach was up in my throat.

Let me pause here and say, for all the women who don’t have children: I was just there, not all that long ago. I’m not saying anybody’s life is worth anything more than anybody else’s. Not saying that at all. But there’s this new thing you have as a parent, something I saw described so poignantly in a terrific mom memoir I’m reading called, “And Now We Have Everything.” The writer, Meaghan O’Connell, is describing the new sense of responsibility she felt after her son was born:

“We had been home with the baby only three days and I kept waiting for some sort of plateau, some easing up,” she wrote. “I was injured and sleep-deprived and trying to figure out breastfeeding and trying to reckon with the intensity of love I felt, and its attendant fear.”

Its attendant fear. Yes! I’ve learned a little about that fear over the past three years. I don’t mean I spend my days being petrified of dying of cancer. I mean that now, as a mom, you can knock me over with a feather. The thought of anything on any level conceivably hurting my children can rock me to the core, much less if I am the one doing the hurting by abandoning them in death. I’m 48 years old. I got a really, really a late start at this. My life expectancy is shorter than say, Meaghan O’Connell’s. She does makes me feel more normal, though, by writing that young moms have these feelings too.

So after Novant called that morning at church, my attendant fear and I packed up my laptop and ducked into the sanctuary. “Please, please, please God, don’t let this be bad,” I prayed, trying to get in and out before anybody saw me. “And OK, if it’s bad, please, please, please, God, give me the strength to do whatever I have to do to get through it.”

Walking downstairs to get Wade from his classroom, I fought back tears and the urge to run up to friends I saw in the hallway and lament: “I just got a call for a follow up mammogram. OMG!.”

One of my many blessings – and there are many – is having a sister who is an obstetrician. She’s got a huge heart, a level head, and a quick trigger on text messages, 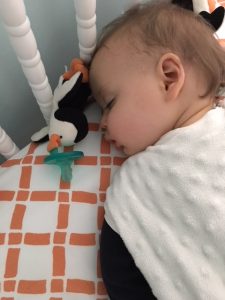 “Just routine,” she wrote about the follow-up mammogram, before I’d even gotten to Wade. “Don’t worry.”

I told her the radiologist wanted a second look at my right breast. That’s the one that had given me problems during breastfeeding – blocked ducts and two bouts with mastitis. Maybe it was related.

Once I got Wade back to the car, I sneaked a quick check. I didn’t feel anything.

Louise just kept it simple, when I made those points to her, texting: “10 % of mammograms get called back.”

That number quelled my fears for 10 days. But this morning they started to creep back in as I sat draped in a pink robe. I was in a waiting room full of women draped in pink robes, wishing we were all at a spa somewhere about to get massages not scans that could reveal tumors.

When I got called back and the scanning started, the technician used words with me like “asymmetry” and “calcification.” That didn’t sound too bad, right? I sent my husband play-by-play texts while he was apparently Googling.

“According to the web, they are usually noncancerous,” he texted.

About the time I was expecting to meet with the radiologist, I was called back from the waiting room for another round of imaging – or boob smashing, let’s be honest. Apparently the radiologist wanted more than just 3D images but magnified 3D images.

One hour for this appointment turned into two and now after two rounds of scans, the technician was calling me back again, this time for an ultrasound.

I sent a panic text to my sister.

During the time the technician prepped me for the ultrasound, she told me the radiologist might also want a “sample” taken. I translated that to mean biopsy.

By then, I was done making small talk. The technician wasn’t saying much to me at this point either. “Obviously they see something troubling,” I thought. “Why else would I still be here?”

While she lubed me up and started scoping around, I looked away from her, in part to hide the tears bubbling up in my eyes and making their way down my cheek. No matter how hard my brain tried to convince me the jury was still out, the attendant fear – aided by my usual sleep deprivation, monthly hormones and the images of my three babies in my head – was starting to win out.

The technician spoke only to say she was going to get the radiologist, who greeted me with a hand shake then took over the ultrasound.

“This all looks normal,” she said, finally. “No signs of a mass.”

Alleluia. I was off the hook.

But she kept talking, and I heard the word sample. They still wanted me to come back for a biopsy. So I wasn’t exactly off the hook, was I?

In the process of dressing and scheduling the biopsy I could get to my phone and see the return text from my sister, “Still OK,” she said, in response to my panic text about the ultrasound. “Call me if you want. Where are you?”

As it turned out, she was at her office, which was right across the street from where I was. By the time I got out to the front desk, she was there waiting on me.

“You’re fine,” she said, while I fought back the tears that were trying to let loose again. “Ninety percent of the time this turns out to be nothing. The other 10 percent – it’s still so small at this point – it’s completely curable. It’ll just be a pain in the ass to go to all the appointments.”

Pain in the ass, I could deal with.

So my boys won’t grow up without me? 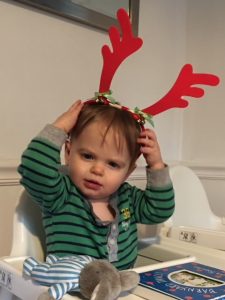 “You’re going to live a long life,” she said, reading my mind. “And die of a heart attack, like everybody else.”

So why couldn’t the radiologist and technicians just say that. She explained, basically, that if they tell me I’m going to be fine, and I’m not, then they worry I’d sue. Being the sister and daughter of physicians, I get that. But I’m also grateful as hell I had somebody who could just give it to me straight and in a hurry.

Rather than spending the rest of the day – and weekend – with my stomach in knots just at the sight of my boys, I greeted Wade with a smile when I picked him up from my mom’s house. After I buckled him into his car seat, I kissed his forehead and then marveled at how he somehow knew it was a little more poignant than usual.

“I love you, Mommy,” he said, unprompted.

I didn’t mind when my twin son Johnny woke up early from his nap that afternoon and we had an hour, just the two of us, in the playroom. And when it was time to go wake up his brother Wes, before their schedules got completely off kilter, I paused for a while just to watch him sleep, listening to “Puff the Magic Dragon” on the lullaby station as my heart swelled.

I’m scheduled to go in for my biopsy Monday. I get the results a couple of days later. I’m sure I’ll get myself all worked up and freaked out again. I’m also sure, one way or the other, I’ll be fine. In the meantime, I’ll keep reveling in the intensity of love motherhood has afforded me and living with its attendant fear.

From the Smarty Health Corner and CEENTA: What are our favorite gifts?

On board with Thomas the Tank Day Out

We went out on top

When I was first diagnosed with Non Hodgkins Lymphoma a fellow attorney sent me a card with a note quoting Proverbs- “a cheerful heart leads to mending and a bitter heart leads to brittle bones”. And that became my mantra. Hopefully you will receive all good news but know you are in my prayers!!

Thank you Wesley!! I did receive good news. Am so lucky for that. Thanks for the prayers. They did the job. I trust that you are well?! Have a brother who is a leukemia survivor so know my way around the L cancers too. Know your spirit served you well. And my Wes is a Wesley too!! Love it. Thanks for writing!