Being a parent can certainly ruin the fun of watching teen movies. Back in the day I could watch a John Hughes film and immerse myself into the awkward life of a teenager in love without worrying about all of the inappropriate messages that might be permeating my impressionable young mind. Now that I’m an adult with a teen son and daughter, I can’t help but worry about what these films project as “normal” teen behavior. Since Netflix has realized that the teen rom-com genre is extremely profitable, I’m sure that they will regularly churn out new content aimed at our teenagers. While Netflix does include a rating system, I have to say that I would not be thrilled with my thirteen year old daughter watching all of these films. Since every parent has a different level of what they consider appropriate, here’s a breakdown of some of the most popular Netflix offerings with some necessary spoilers included. 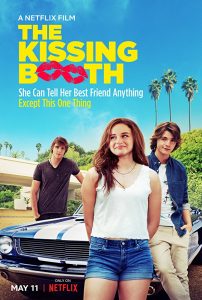 Elle Evans (Joey King) and Lee Flynn (Joel Courtney) have been the best of friends since birth—literally since their moms were best friends and had their babies on the same day. The pair have been inseparable ever since, even after Elle’s mom dies. Elle and Lee even create a list of rules to keep their adorable friendship intact including a rule that you can’t fall for a relative of your best friend. This rule becomes especially hard to keep as Elle begins to fall for Lee’s ridiculously handsome older brother Noah (Jacob Elordi). At the high school carnival, Elle unexpectedly finds herself being kissed by Noah at the kissing booth and they quickly realize they can’t ignore their feelings for each other. Elle and Noah begin a secret affair which if revealed could destroy her friendship with Lee. Here’s a quick list discussion points should your teen watch this film:

1. Elle can’t seem to keep her clothes on. Whether a wardrobe malfunction leaves her wearing a too short uniform skirt to school (and she then gets grabbed by a boy because she was “asking for it”) or she walks into the boys locker room in her bra by mistake but then dances around suggestively—Elle certainly lacks the virtue of modesty.
2. Sixteen year old Elle decides to sleep with Noah right away. Up until this point she’s never gone on a date or even kissed a boy. She doesn’t seem to have any qualms or thoughts about losing her virginity even though she knows Noah is a “player.”
3. Alcohol at parties is completely normal and there is no adult supervision at these events. Binge drinking is encouraged and Elle gets blackout drunk and wakes up in Noah’s bed the next morning completely unaware of what happened to her the night before.
4. Noah has some anger and control issues and is constantly getting into fights. Instead of this being a warning
flag, being the “bad boy” makes him even more attractive to Elle.
5. There is strong language throughout the film but it’s not used excessively.

I do like the fact that Elle shows strength and independence and doesn’t just obey Noah blindly. The sibling rivalry between Noah and Lee also really rings true as does the devastation felt at the loss of a friendship. In the end Elle learns to listen to her heart and not allow others to dictate her future—she is confident in herself with or without Noah. Bonus points for ‘80s teen idol Molly Ringwald making an appearance as Noah and Lee’s mom. 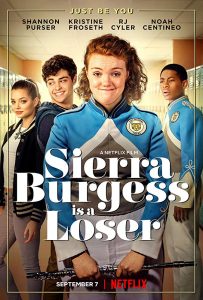 Sierra Burgess is a Loser
TV-13

Sierra Burgess (Shannon Purser) is a brilliant big-boned teenager with two successful and loving parents, a supportive best friend Dan (RJ Cyler) and a refreshing disregard for fitting in with the popular crowd. Sierra hopes to attend Stanford and sets her mind on getting into college instead of worrying about rude taunts from mean popular girl Veronica (Kristine Froseth). When the beautiful Veronica is asked for her phone number by handsome quarterback Jamey (Noah Centineo) from a neighboring school, she decides to prank Sierra by giving Jamey Sierra’s number instead. The smitten Jamey texts Sierra and the two hit it off instantly. Sierra quickly realizes that Jamey thinks she’s Veronica but she continues to go along with the ruse. She’s so enamored with Jamey that she bribes Veronica with tutoring sessions to help her keep up the charade. The girls work together for the shared goal of getting a guy—Sierra wants to keep up her phone relationship with Jamey and Veronica wants to get smarter to impress and win back her college ex-boyfriend Spence. I assumed that Sierra’s story would be the sole focus of this teen Cyrano de Bergerac tale with her body image issues and concerns about living up to her successful parents. However, Veronica’s sad backstory was also very compelling. Some topics of discussion would include:

1. Sierra builds a relationship with Jamey based entirely on a lie.
2. Sierra seems to lose all interest in schoolwork once she meets Jamey and even forgets to turn in an important assignment.
3. Veronica offers to send Jamey a nude selfie without hesitation (which Sierra declines).
4. Sierra is often called a lesbian in a derogatory manner.
5. Jamey attempts to kiss Veronica on a date but she covers his eyes so a spying Sierra can kiss him instead—without his knowledge or consent.
6. Sierra goes to a party where there is no adult supervision and plenty of drinking and she even does a keg stand.
7. When Sierra feels betrayed by Veronica, she lashes out at her by sharing with the whole school a degrading private text and photo as revenge.

We all want to root for the underdog and for her to find love and happiness. I just don’t want for her to do that by losing all of the qualities that make her special. Sierra definitely escaped the consequences for doing a lot of underhanded and awful things in order to get the guy. Still, both Jamey and Veronica show grace and forgiveness which is so important for teens to see these days. Bonus points for two teen film stars playing Sierra’s parents—Lea Thompson (Back to the Future, Some Kind of Wonderful) and Alan Ruck (Cameron from Ferris Bueller)! 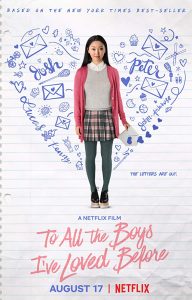 To All The Boys I’ve Loved Before
TV-14

Lara Jean (Lana Condor) is a shy teenager who loves to read romance novels. She would much rather tag along on her older sister Margot’s (Janel Parrish) dates than go out on any of her own. Over the years hopeless romantic Lara Jean has written five love letters to boys as a way of dealing with her feelings. That way, she can express herself without actually putting herself at risk of being hurt or rejected. Part of her fear of getting hurt stems from the death of her mother (a familiar theme in these films!). One of the love letters is to her next door neighbor Josh (Israel Broussard) who is one of her dearest friends but also Margot’s boyfriend—awkward! When Margot heads off to college, she breaks up with Josh and implores Lara Jean to start making an effort to meet people in the new school year. Much to Lara Jean’s surprise and horror, her secret love letters are then mysteriously sent. Suddenly her innermost and in some cases very out of date feelings have been revealed to five different guys. At school, Lara Jean is approached by campus stud Peter (Noah Centineo—no stranger to teen Netflix movies!) who kindly rebuffs her declaration of love in the letter as he’s still into his ex-girlfriend. At the same time, Lara Jean sees Josh approaching with his own letter and in a panic she kisses Peter to show Josh that she doesn’t have feelings for him. Got that? Later, when Lara Jean admits to Peter that she was using him to throw Josh off track, Peter hatches a plan—they will pretend to date each other to make Josh jealous and in the process help Peter win back fickle ex-girlfriend Gen who keeps dumping him and reeling him back in. Suddenly Lara Jean is hanging out with a whole new crowd of popular kids and is getting lots of attention as Peter’s girl. But what happens when the fake couple really starts to bond and develop genuine feelings for each other? This is by far the mildest of the three films. Still, a few items to discuss:

1.) Lara Jean goes on the school ski trip which is famous for couples hooking up. Her father lectures her on safe sex as she leaves and hands her a huge envelope filled with condoms—much to Lara Jean’s horror.
2.) Lara Jean does make out with Peter in a hot tub and a jealous Gen films them—implying that the two had sex when in fact they did not. She then shares the video with the whole school.
3) There is partying at an unsupervised house where alcohol is served.

Overall, the theme of this film is how Lara Jean needs to be honest about her feelings and make them known to others even if she risks being hurt in the process. The bond between the sisters is very sweet and budding romance between Lara Jean and Peter feels like an old-fashioned courtship. While not an ‘80s teen heartthrob, bonus points for Sex and the City vet John Corbett playing Lara Jean’s endearingly awkward yet responsible father.

So there you have it. I enjoyed aspects of all three of these films and especially appreciated the sly references to the classic teen romances of our youth. Still, it was a little surprising to see just how prevalent teen drinking and partying is in each film. The bottom line is that it’s important to know what your teen is watching and what is sold as the norm. My husband says you can either teach your children about morality or they can get it from the internet. My best advice is to watch these movies with your teen and turn the questionable choices of the characters into a discussion—combining entertainment and a learning experience all into one fun night. Good luck!

Get your tickets to Clara’s Trip: A Cirque & Dance Nutcracker Story & an exclusive 20% CSP discount!!

Grandparents Gifts: Camps and Activities Under the Tree

Smarty Book Review: I AM PILGRIM