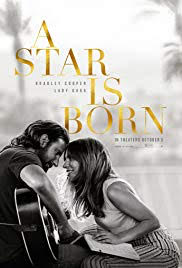 I think I’ve been pretty clear over the years about my love for Bradley Cooper. Whether he’s playing an American sniper, a master chef, a bipolar Eagles fan or even the voice of a raccoon, he effortlessly morphs into each character so seamlessly you forget that you are even watching Bradley Cooper the actor. I was a little surprised that he would choose A Star Is Born for his directorial debut since it’s the fourth time the story has been made for the big screen. It’s certainly not a spoiler at this point to reveal that the plot revolves around an alcoholic star’s gradual decline —a subject that doesn’t normally appeal to me at all. Still, there’s no way I’d miss the opportunity to see him take on the role of Jackson Maine, a world-weary music legend whose alcoholism is slowly derailing his once stellar career. I’m so glad that I did because this beautiful and haunting story is about so much more than just one man’s downfall.

We first meet Jackson on stage in front of an enormous crowd. After recovering from the initial shock that this long haired bearded man with the deep and soulful voice is in fact Bradley Cooper, I became completely lost in his performance. On stage in front of the adoring fans, Jackson is a superstar feeding on the energy of the audience and the music he creates. Once he’s off the stage, things fall apart. During a bender, Jackson hits a bar hosting a drag show where he meets Ally (Lady Gaga) a waitress who also sings there. Enthralled by her performance, the two instantly connect. Their evening together so realistically depicts what falling in love really feels like. Often in love stories there’s the “meet cute” and then you simply go along with the fact that the characters are supposed to fall for each other. The connection between Ally and Jackson does not feel forced or ring untrue in any way. You really feel the bond between the pair and genuinely want for them to succeed together.

Jackson brings Ally on tour where her singing and songwriting gifts finally get a chance to shine. Lady Gaga is perfectly cast in the role of Ally, a woman overflowing with talent but lacking an opportunity to share it. When the pair perform on stage together you see just how proud Jackson is to witness Ally’s success and how they perfectly fit together. It’s hard to believe that this is Lady Gaga’s first acting performance as she does such a fantastic job of portraying Ally’s transformation from an insecure waitress to a full on superstar.

While we fervently wish that Ally’s love alone can heal Jackson’s old wounds and eventually cure his drinking, that’s unfortunately not how it works. Ally’s new manager keeps her busy with a new look and a new sound, and Jackson is suddenly relegated to the sidelines. His drinking worsens and eventually threatens to destroy Ally’s career along with his own. Ally is willing to sacrifice her career for Jackson, but will Jackson allow her to do it?

This story will stay with you long after the credits roll. Whether you focus on the beautiful love story, the quest for stardom or the perils of addiction, A Star Is Born succeeds on so many levels. It’s a poignant story that Cooper stunningly captures on film.

P.S. So, can my teenager watch this film? That always depends on your comfort level and your teen but obviously alcoholism is a major theme of the film so drinking and drugs are prominently featured. There is very strong language throughout the film, one tasteful sex scene and one brief shot of Ally leaving the bathtub. If you haven’t seen a previous version of the story, there is a major tragedy in the end. Still, there is also the depiction of a true love story with commitment and sacrifice. One final note of caution—if you buy the soundtrack (which I immediately did after leaving the theater) be warned that dialogue from the film is included between songs and there are plenty of F-bombs in those parts. So don’t play this in the car with the kiddos unless you edit it first!

Pre-register now for Summer Break 2022 with the...

Smarty Reminder: Register for Music Together of Charlotte...

Agree wholeheartedly with this review! I would also add if you’ve seen the prior versions, those stories are more about the rise of the female lead rather than the fall of the male. I really like how this version tells both sides fully. Makes it a much more believable story! You can actually download a “clean” version of the soundtrack too, if that helps! 😉