Is it just me, or does it feel like you get bombarded with information when it comes to learning how to take care of a baby – classes on birthing, breastfeeding, etc. – but when that sweet little baby turns, say 2, you wind up in the parenting wilderness? That’s how I felt when it came time to start disciplining. 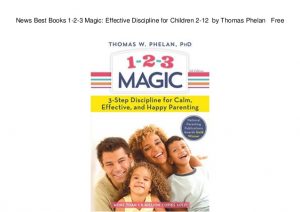 One day our son Wade was jumping up and down on furniture and smiling at our attempts to coax him down. I knew I had to do something but I didn’t know what or how. I had to text his preschool teacher to find out how to do a timeout! Thankfully she was patient and helpful, but I knew I had to get a grip on the situation and fast. My pediatrician recommended the book “1-2-3 Magic” by Thomas Phelan, and it has been a godsend.

The book teaches you how to discipline your child by calmly counting to 3, effectively giving him or her two chances to amend the behavior. If it doesn’t stop by 3, you either give a time out, or as the child gets older, take away privileges (or other various tactics he mentions in the book.)

Counting is meant to be used on behavior you’re trying to stop. As Phelan writes, it won’t work if you’re trying to convince your child to eat his peas or to hurry up and leave the house to get to school on time. But if you want your child to stop jumping on furniture or to stop pushing his baby brother (our twin sons are 11 months old) it works!

I’m not saying Wade doesn’t poke his brothers anymore. Or that he’s anything less than a full-blooded 2-year-old, but I am so much happier 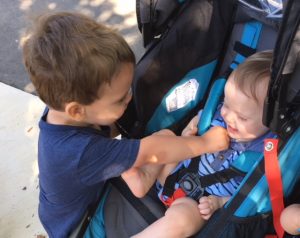 Wade getting a little “touchy” with his brother Johnny

in the midst of testy situations because I have a plan for how to handle them. I realize now that half of what made my blood pressure rise when Wade was acting up was not knowing what to do. All I knew was what I didn’t want to do.

This is not something people really talk about in public forums much anymore, especially in the politically correct world we live in, but I’ll go ahead and acknowledge the elephant in the room: I don’t want to spank my children.

That’s not to say I look down my nose at parents who do. I was spanked as a child, and I couldn’t love and respect my parents more than I do. Before I became a parent, I was absolutely open to the idea of it. I figured if all else fails, spanking works. If a child runs into the middle of the street and doesn’t listen to reasons why he shouldn’t, spanking would get the point across and be better than the alternative.

Then I became a parent. From the time Wade was born, and the twins shortly after him, something in me shifted. I knew I didn’t want to spank. I want my children to be disciplined and well-behaved, but I figured I would find another way. At some point.

Then one afternoon I was home with Wade, in the heat of a toddler moment. In the blink of an eye – I swear it felt like my hand moved without my brain’s permission – I popped him on the thigh. I immediately wanted it back.

Wade looked so confused. He actually told me it hurt. Bless his heart. It hadn’t registered that – as out of body for me as it might have felt – I had inflicted it on purpose. I was supposed to be the one comforting him when he got hurt not being the cause of it. Luckily, he didn’t dwell on it, and we moved on. But I knew it was my wakeup call. I couldn’t just go on reacting to things.

The beauty of 1-2-3 Magic is that a) it works. Just by calmly saying “That’s 1,” I’ve seen Wade take his hands off a baby brother and back away from a volatile situation. We still have our fair share of timeouts, don’t get me wrong, but in our house, we’re learning that timeouts are not all bad. In fact, Wade actually puts himself in timeout sometimes. 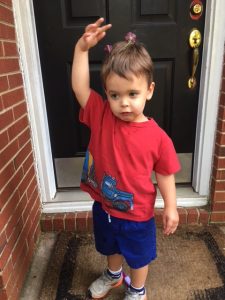 Sometimes it’s cute. Sometimes it’s downright puzzling. Sometimes I think Wade wants to feel like he’s the one with control over the situation. But if the end result is a couple of quiet minutes apart, or if he’s just beaten me to the punch, and a bad situation has been defused? Fine by me.

Just the other day, while I was tending to his twin brothers, Wade got a hold of some crayons (I only thought they had been out of reach) and I found him drawing on some white recycling bins in our kitchen.

As much as I tried to take the emotion out of my voice, as Phelan suggests, when I said “Wade, that’s 1,” the words came out mad. Wade didn’t wait for me to get to 2, or to say “That’s 3, take two minutes” like you do if a behavior is egregious and you go straight to a timeout. Wade told me he was going to take a timeout and started walking toward his room.

As I set the timer for two minutes – one minute for each year of his life – I realized that Wade probably preferred the peace of his room to me chastising him. Who can blame him? And again, fine by me. I needed some peace from the situation myself and a chance to clean up the recycling bins.

The beauty of timeouts, I’m learning, is that once the penalty is served, both you and your child get to be happy again. You don’t have to dwell on what happened. It’s over. You move on. Wade likes to say “I feel better,” when he comes out of his room. I tell him, “I do too.” I know, if I weren’t learning how to handle myself in these situations and still letting my temper get the best of me, I could feel so…much…worse.

Phelan writes, “It’s about time that people face up to reality: the vast majority of spankings are parental temper tantrums.”

I was ripe for a temper tantrum today. I had been changing Wade’s diaper before naptime (we are dabbling in potty training – another blog for another day) and Wade was well past the point of tired. My husband and I call it the “crazy train,” when Wade gets super whacky and is just physically all over the place. It’s not that he’s malicious, necessarily, but all the flapping and flailing can make him a danger to himself. Today he was a danger to me.

At first, he started kicking me. I said, “Wade, that’s 1.” I probably had a little too much emotion in my voice (sorry, Phelan, sometimes the calm is so hard to pull off!”) But the next thing I knew Wade had reached up and hit me in the face. It wasn’t really a direct blow. It was more of an awkward swipe, but it got my immediate attention because he had poked me in the eye.

I drew in a deep breath.

I managed to keep my mouth shut as I got a diaper on him, and I carried him calmly over to his crib. He was already saying “time out, time out” which was probably an attempt to get me out of the room without having to go to bed. I knew that wasn’t an option, so I put him down and said as calmly and clearly as I could muster, “You don’t ever hit Mommy.” (I probably should have told him “don’t ever hit anybody” but that’s what came out of my mouth.)

I told Wade he was not going to do a timeout but that I was not going to read to him and we were not going to “rock and pray,” which we do twice a day before he goes down. I walked out of the room and shut the door – calmly. Then I exhaled.

I had gotten out of the room without losing my mind. I think Wade cried for a minute or two – I didn’t stick around long to figure out – and soon thereafter fell asleep. I think he knew there was no sense in protesting anything.

Two hours later, I went back in to get Wade up from his nap. He reached out to tickle me, and said “Mom happy?!” I felt like he was trying to tell me he’d meant to tickle me before and to apologize in his own way. I’m so grateful I didn’t have to apologize to him. I gave him a big hug and a smile and we got on with our day.

The Power of Theatre: The positive impact it has on your children

Potty training confirms: No such thing as cookie-cutter...

Why a Limited Liability Company is Often Better...

Smarty Podcast: The Benefits of a Pre-K-8 Education

Encouraging our kids and parents to accept failure...