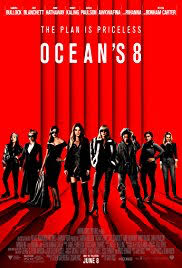 The terrific Ocean’s Eleven trilogy series starring George Clooney, Brad Pitt and Matt Damon was both a critical and box office success (despite being a movie that was itself originally a remake) so it’s no surprise a new version seemed like a great idea to Hollywood executives. But why not throw in a twist by making it an all-female cast this time around? Even better, get an amazing star-studded cast of women involved and surely you can recreate that original Ocean’s magic! Here’s the thing—if you are going to hitch your wagon to something beloved, you have to expect comparisons and you better make it flawless. While this was a valiant attempt, Ocean’s Eight sadly falls just a bit short.

The film opens at the parole hearing of Debbie Ocean (Sandra Bullock). The sister of the notorious Danny Ocean, Debbie delivers a convincing speech insisting that despite her entire family’s criminal history, she only wants to leave jail to live a simple law-abiding life. However, the moment she is free she is right back in the con business. Debbie reconnects with her old partner Lou (Cate Blanchett) and details her plan to pull off the biggest heist imaginable—stealing the famous Toussaint diamond Cartier necklace at the Met Gala. In order to do this, they must first assemble a brilliant team. Debbie and Lou first recruit Rose Weil (Helena Bonham Carter), a down on her luck fashion designer who they need to design a Met Gala dress. Then they recruit hacker Nine Ball (Rihanna), pickpocket Constance (Awkwafina), jewel expert Amita (Mindy Kaling), and organizer Tammy (Sarah Paulson).

The plan involves getting mega celebrity Daphne Kluger (a hilarious Anne Hathaway) to have her dress designed by Rose Weil, who will insist that she wear the $150 million bauble to the event. The crew will switch out the diamond with a fake copy during the event and no one will ever be the wiser. Sounds like a simple plan right? It only took Debbie five years in prison come up with it.

My first problem with the film is that an amazing cast has been assembled without giving them enough to do. I adore Sandra Bullock but she plays Debbie as too dispassionate and jaded to be terribly interesting. When asked by Lou why she needs to pull of this job her response is simply “because it’s what I’m good at.” This isn’t exactly an earth-shattering declaration that makes you really invest in her success. Similarly, the always fabulous Cate Blanchett’s Lou is incredibly cool and hip, but you don’t learn anything about her character and she’s completely unruffled by anything that comes her way. There just isn’t the kind of witty banter between the two compared to what occurred between George Clooney and Brad Pitt. In that series, the guys weren’t afraid to make fun of themselves and create some humor surrounding their faults and insecurities. But Debbie and Lou aren’t having any of that nonsense—they are all business. Also, why would you hire a brilliant comedic talent like Mindy Kaling and not give her anything funny to do? Or take the fascinating Rihanna and dress her in coveralls and throw her behind a computer screen for the majority of the film? Sarah Paulson’s character hinted at an intriguing life because she was a suburban mom who was also a thief but the writers didn’t delve far enough into her story to give us enough details. Anne Hathaway really did steal the show because her vain and obnoxious character Daphne (while ridiculous and perfectly over the top) seemed the most human and lively of the bunch.

I remember hearing something fascinating when Sesame Street launched the character “Abby Cadabby” years ago. They said it was hard to create a female character because you don’t want to give negative characteristics to a female. It makes sense—if Cookie Monster were female you’d call her a binge eater and Oscar the Grouch would be called something rhyming with witch. Men can get away with things that women just can’t and maybe that’s why these characters haven’t been given any flaws which could make them seem weak or less successful. As a result they are less relatable and bit dull.

My second problem with the story is that there isn’t a fantastic villain to root against. In the Ocean’s Trilogy, you had some really rotten guys that (while I don’t condone criminal behavior in real life!) really deserved to be stolen from. The bad guys got what was coming to them and that’s part of the fun of a heist. In this case, Cartier was being stolen from and there wasn’t a gripping motive other than simple greed. There was a bit of revenge involved in the story with Debbie getting back at ex-boyfriend Claude Becker (Richard Armitage) but he certainly wasn’t a very worthy or exciting villain.

This is by no means a terrible film. It just had so much potential to be amazing so it’s hard to ignore the missteps. There is plenty of glitz and glamour to go around and even a cameo by the one and only Anna Wintour since the event is after all the Met Gala. I just wish the film didn’t rely so heavily on celebrity and fashion instead of delving further into developing the characters. The story just seemed to follow too closely to the pattern set by the Ocean’s Trilogy—plot the robbery, build the team and then execute the plan. Unfortunately, there just weren’t enough potential failures, double crosses, and surprises to keep this story as interesting as it could have been. The story also dragged on well past the robbery making the finale long overdue.

I love the idea of reimagining stories from a female perspective and I absolutely applaud the effort. I just hope that future writers will step it up a notch and realize that when it comes to filmmaking, we ladies want to have style AND substance next time around.

Smarty Guide to the Greek Festival

Storytime at Morrison Library back and better than...