Josh Jones is a man of many relationships. He’s been described as a business owner, dad, husband, a fundraising fanatic; as well as, a lousy cyclist and golfer. Raised in Charlotte, Josh is the kind of guy who built his life on the importance of relationships. Among these titles, “A Great Friend” is the phrase most often bestowed.

Josh is the proud co-owner of Jones & Hedges Custom Home Builders, specializing in mid to large scale renovations and builds. “We are focused on creating experiences and relationships people want to share with others as we build or renovate their homes.”

Josh’s grandfather once told him, “Be nice to your sister, because one day you’ll want to go out with one of her friends.” It was good he listened. Josh married his best friend, Barb, 12 years ago. Although his sister Callie, might argue that she was her best friend first, since they were college roommates. Greatest of all, he’s been a loving father to three children; Libby, Will and Leighton. He is also an avid reader of Charlotte Smarty Pants. 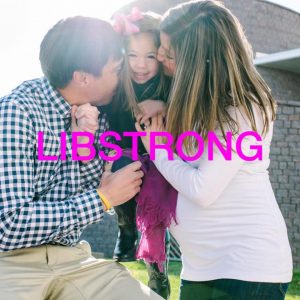 To know Josh and his family is to know their daughter Libby and the story of Libstrong. Libby was their first born and the first grandchild on both sides of their family. Libby was diagnosed with Leukemia in March 2013, when her brother Will was just seven weeks old. Their world instantly shattered. Libby, 2, had a full head of thick dark hair that she was born with and never lost, she also had an extensive vocabulary and a vibrant personality. She was as happy and full of life as any two and a half year old could be. She loved Tinkerbell, Disney and shoes. She had more shoes and hair bows than most girls have at age six. For fourteen months, they were surrounded by love and support. Will was raised by his grandparents and family friends while Josh, Barb and Libby lived in tiny hospital rooms at three different hospitals. They were rarely at home and couldn’t be around others due to the treatments. Josh would sleep in the hospital bed each night with Libby because he was her security blanket and her comfort. Barb would be right there with them on the small vinyl sofa. Sleep was often limited and the fight was excruciating day in and day out. Barb was fierce as a mother doing exactly everything she needed to for Libby, while still managing to find her daughter’s smile each day. At night, when Libby was asleep, Barb would research doctors, treatments and hospitals. There was never a moment when they thought they wouldn’t beat this. In May of 2014, Libby’s fight with leukemia had ended leaving heartache and devastation in its wake.

The entire Jones Family holds a special place in my heart. Each of them are a container of love, depth, devotion, vulnerability and grief. There is no mirage to their joy or their pain. They wear it all with honesty.

Josh’s fiercest role has been fundraising and riding for 24 Hours of Booty to honor Libby’s Legacy. 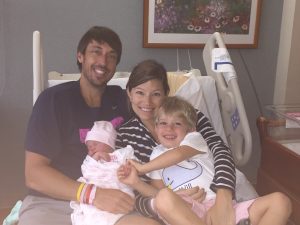 24 Hours of Booty is a cause near and dear to your heart. What does being part of this organization mean to you? 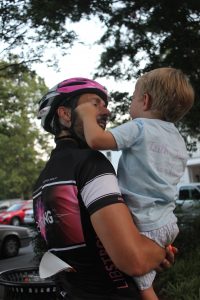 The 24 hours of Booty event started out as a way for me to get on a bike and honor the life and friendship of Jonathan Tisdale. After he passed away from a brain tumor, a group of our childhood friends decided to ride in his honor. That was in 2011. Two years later, a month after our daughter was diagnosed with leukemia, Team Libstrong was created by friends and family to honor our daughters fight. After she lost her fight 14 months later, it became the way I dealt with my own grief. There were so many people who were part of our story and wanted to continue to be part of it. This became the way they could support us. Each year that I tell people about our daughter Libby and why I participate in 24 Hours of Booty and I simply invite others to be part of it with me on any level they want to. You toss the pebble into the pond and just watch the ripple effect take place in people’s hearts. There is so much good in the world.

What have been your biggest accomplishments with 24 hours of Booty?

Team Libstrong started with 15 people in 2013 and grew to over 100 people in 2017 as Team Libstrong/Drew’s Crew. We teamed up with our dear friends, Wes and Mandy Slocum, who lost their son Drew in January 2015. As a group of cancer fighting friends we strive to inspire others to join the fight and continue to connect our community with a purpose greater than ourselves. This is how we keep pedaling the Legacy of Libby and Drew. Our team has raised over $600,000 the past four years. The 24 Foundation has made a $350,000 commitment to Levine Children’s Hospital (LCH) at our request and granted $12,000 for Claire’s Army in 2017 specifically impacting Pediatric Cancer in Charlotte.

How can we get involved?

Donate or join our team. You can make a tax deductible donation on my page personally or any of our riders. Join the team to be a walker or a rider. It’s important to know, this is NOT a cycling event, the cycling is the physical exhale of all the efforts of the fundraising goal. There is no requirement to ride distance or time. Ride as much as you want to honor who you are honoring or fighting for. That’s it. You go out to have fun and enjoy the energy of it all. I tell families to come out and cheer for us on Friday night. Bring a picnic, drinks and chairs to sit in the median on Queens Road West and get a taste of the incredible emotion and energy coming from the riders in the event. The crowds and parties along the loop have increased and grown each year and it is amazing to see as a rider. Here’s a link to my fundraising page. I hope you’ll find a way to be part of this important event. https://events.24foundation.org/fundraiser/1254382

Talking about the loss of a child is an tender issue, what advice could you give to others about talking with you or your family about Libby?

Sure. First I think it’s important to know that everyone grieves differently, so my perspective and lessons learned are that of my own, my marriage, and the counseling that we have been committed to the last four years.

For me, it’s important to talk about Libby. I love it when people ask questions about what she was like if they didn’t know her, talk about how she crosses their mind at certain times, or simply that they’ve been thinking about her and our family. This shows me that she is NOT forgotten and that her journey left an impression on them.

Avoidance is an easy route, but can also be the most hurtful and difficult. Often times people don’t know what to say and therefore don’t engage. Please don’t avoid me or my family for this reason. Simply say, “I’m thinking about you.” That shows me that you care. Be willing to walk alongside me and risk being uncomfortable. It is truly a gift.

What have you learned about yourself, your family and how you grieve in the years since?

One of the biggest things we’ve learned about grief is that it continues. It never leaves. It may lie back in the weeds for a while but it will always be there and it’ll knock down your door when you least expect.

In our marriage, Barb and I are very different in how we deal with this. It started early in the diagnosis and continues now through our grief. By being willing to understand that, we work hard to be respectful of each other, and know that although it separates us at times, each way of grieving is our own and it is OK. That could change for either of us but we take it one step at a time and do our best to support one another in that difference.

For me personally, I’ve learned that there is a version of “NEVER QUIT” in everyone, no matter the circumstance. I’ve learned that I am only as good as the people I surround myself with. I am incredibly blessed and undeserving of the immense love that follows and supports me and our family. I am inspired by the stories of people who did not quit, like Marcus Lutrell (Lone survivor), Taya Kyle, and David Goggins. More importantly, I am most inspired by my family and friends who have made me the person I am today. My brother Clay was Libby’s Bone Marrow donor. Without blinking an eye he took that burden on with great love. He received painful shots for a week to boost his own body and then endured the procedure for 12 hours hooked up to machines while confined to a hospital bed. He did this for her, for me, for all of us. He gave her a chance to fight. I have met nurses who run toward the cancer fight everyday on the 11th floor at Levine Children’s Hospital to take care of children and their families the way they did ours. These nurses have seen and felt more loss than most people do, but they keep doing it. I have also seen parents who have laid down everything they have to fight for their kids and for their family. All of these stories, remind me to focus on what’s right in front of me and that’s Faith, Family and Friendships. The gifts I often feel undeserving of.

How has parenthood changed for you? 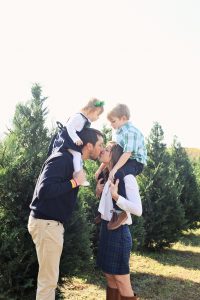 I had amazing role models in both my parents and grandparents. They were and still are always engaged with us and our children. I was excited and ready to be a parent. Having a brother 11-years younger gave me a glimpse into what it meant to be a parent as well. When our kids were born, I had flashbacks of helping my mom with him or babysitting him over the years at various ages.

Losing Libby certainly made me a better parent to Will and now Leighton, but it didn’t necessarily change parenthood in general for me. I still have the same hopes, fears and frustrating emotions that any typical parent does. I will admit that because of PTSD, parenting became harder at times. A simple fever, ear infection or cough scared the living hell out of me. These common ailments don’t typically have that kind of affect on parents. 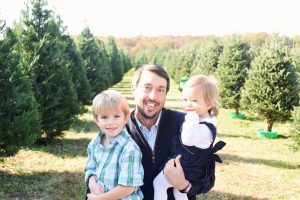 Favorite Place to shop for yourself…
The Sporting Gent in Charlotte or M. Dumas In Charleston
Favorite Workout / Place…
Forty five minutes in my running shoes on a trail somewhere
Best Date Night Spot…
I want to be more creative but our go to is Foxcroft Wine Shop. Food is great, drinks are great and always a crowd.
Best Personal Indulgence
Toyota Land Cruisers
Drink of Choice
Blade and Bow Bourbon on the rocks

Join the army of women

What an inspiring article and family.