The Leukemia and Lymphoma Society wants me to look at photos of bald-headed children. They want me to watch a video of a mom rocking a baby girl draped in a hospital gown with IV tubes taped onto her tiny right hand.

The Charlotte chapter of “Moms in Training,” an LLS-sponsored 10-week boot camp I joined this spring, wants me to read weekly updates about our honored hero, Jennings Palmer, a boy who just celebrated his 3rd birthday and nine days later underwent a bone marrow transplant.

I’m sorry, but I can’t do it. About 99.9 percent of the time, my heart just can’t take it. It makes me feel sick. I am overcome with the urge to get right back to mindless Facebook scanning for cute baby pics and funny Mommy blogs about potty training and getting spit-up in your hair.

See, I’m a mom now. I have three boys aged 2 or younger, including 7-month old twins. I’m a rookie at it, but I already feel the utter vulnerability that comes with being a parent. I know how it feels – as somebody put so eloquently once while we were waiting in line at Starbucks – to have your heart walking around outside of your body.

My heart melts when one of my boys gets a virus. The thought of somebody hurting their feelings crushes me. So watching toddlers battling cancer is more than I can bear.

But damnit, LLS, what you’re doing works on me just the same. I can rifle past email in my inbox all I want. I can ignore the notifications on my social media apps. But I know they’re there: the tired eyes of sick babies, the brave-faced moms, who can’t let their guards down for an instant and risk babies seeing fear in their eyes. There but for the grace of God go I.

It was hard enough when my brother was diagnosed with chronic lymphocytic leukemia at age 44. I was still single and living in Atlanta then, in June of 2007, when Chip was told he had Stage 4 leukemia. Within 24 hours, we also found out my brother Wade had died unexpectedly in his sleep.

It was an incredible blow. One of my first – or best, anyway – reactions was to sign up for Team in Training, a fundraising program for LLS. You train for endurance events while raising money for the fight against blood cancers. It was the perfect outlet.

In a span of five years, I ran a half marathon and two full marathons. My brother and sister-in-law did several Light the Night Walks in Raleigh and distance swims for LLS. In all, we raised more than $100,000. Chip, thank both the Lord and an incredible oncologist at Emory Hospital, endured a rough ride through chemotherapy and went into remission. In October, he will have been in remission for 10 years.

But LLS keeps getting to us. A friend of mine recently asked me to join Moms in Training. For an out-of-shape twin mom, it was just what I needed. Meanwhile, LLS has discovered just how gifted a voice they have in Chip and recently asked him to help them advocate for policy change, starting locally in Georgia and then going to Washington, D.C. 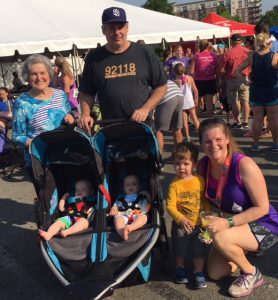 My whole crew after the Mother’s Day 5K, including my mom, my husband Gus, our son Wade and our twins Johnny (left) and Wes

So two days after I ran a Mother’s Day 5K with Moms in Training here in Charlotte, Chip flew to D.C. to meet with staffs of both Georgia senators and personally with Austin Scott, the U.S. Representative from Georgia’s eighth district. Chip and a team of people from LLS advocated for legislation to help bring fair and better healthcare coverage to cancer patients, including the Cancer Drug Parity Act for self-administered drugs and the Fair Care Act protecting those with short-term insurance (#LLS4Access.) 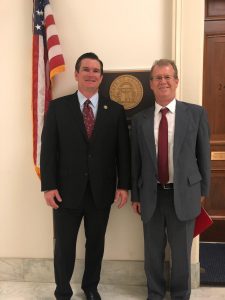 Chip told them his story. He told them how fortunate he was that his treatment was covered by insurance, even though he was in the process of moving from Oklahoma to Georgia to take a new teaching job when an oncologist told him he would need a $500,000 bone marrow transplant. Members of our family had been scrambling to figure out if they needed to take out second mortgages to cover it.

Chip told them about the drug Ibrutinib, which his doctor said will be his next course of action when and if the cancer comes back. “Dr. [Chris] Flowers told me they wouldn’t do chemo with me again because it was almost too much,” he said. And it was. I know first-hand because he and other family members often stayed with me in Atlanta during his chemo treatments.

The going rate for Ibrutinib is $400 per pill, and it’s taken daily. But since the drug is given orally, not intravenously, insurance companies aren’t required by federal law to cover it as a medical benefit. In the seven states which haven’t changed their laws yet or for 60 percent of those privately insured whose plans are federally regulated, patients are forced to pay exorbitant out-of-pocket costs for medicines because they are only covered through their drug plans.

So yeah, Chip has had a busy week, trying to change the world. Me? I just rolled out of bed, put on some running shoes and slowly but steadily pushed two sweet babies in a jog stroller for 35 minutes while my husband, oldest son and mother cheered us on. The race was only 3.1 miles, but I still can’t cross a finish line for a Team in Training event without tears in my eyes. They come even harder, now, as a mom. 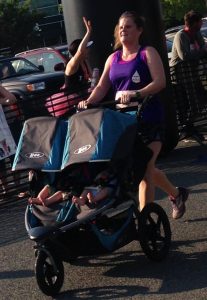 Me and the twins crossing the finish line of the Mother’s Day 5K, my smile hiding tears!

If you’d like to contribute to my fundraising efforts for Moms in Training on behalf of the Leukemia and Lymphoma Society, an organization that does so much more than tug on your heart strings, please go to http://events.lls.org/pages/nc/MITFY18/CWalton
To find out more about Charlotte Moms in Training, go to the registration page:
https://www.momsintrainingcharlotte.com/

Infertile In A Fertile City