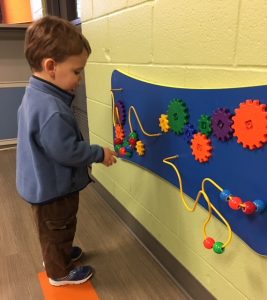 Drop-in childcare at the Harris Branch YMCA changed my life, and I’m only mildly exaggerating. Coming to the realization as a new mom that I could leave my toddler in capable hands, while I got in a workout – and even a shower! – was revolutionary. For all the changes motherhood brings, it made me feel like myself again.

In my former life, I used to exercise five times a week, mainly for mental release from the everyday stresses of life. That didn’t always work after my son Wade was born a little more than two years ago. It’s not good form to be out pushing a child in a stroller in the rain, right? I could go to Planet Fitness after my husband got home in the evenings, but who wants to wait that long to exercise most days?

I started going to the Y this time last year when Wade was approaching 18 months. One of the main reasons I joined was for access to the pools. I was pregnant again, this time with twins, and the idea of enduring Charlotte’s summer heat was daunting. Ultimately, though, it was the “Kids’ Place” that kept me going back to the Harris Y over and over. 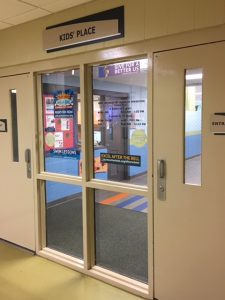 At the time they offered an hour and 15 minutes of free childcare to members who remain onsite. (Since January, they’ve expanded that to two hours.) By the end of my pregnancy, I was at the Harris Y five days a week, either swimming or doing the elliptical machine.

I’d been a rookie when it came to leaving Wade with somebody other than a family member or at the church nursery. But the Y made it so easy to get him acclimated. The first day he made it only 20 minutes before they called me to tell me he was still crying. But that was the last time they’ve had to call me.

We stayed a little longer each visit – once I went just long enough to shower – and it got easier every time. Wade was used to being in a quiet house with me, so when he needed help adjusting to the chaos of being around so many other kids, they would put him in a stroller, and it made him feel safe and secure. After a day or two with occasional stretches in a stroller, he was off and running. Now he practically skips down the hallway to the Kids’ Place, and he walks ahead of me through the door.

I have no doubt that going to the Y drop-in helped Wade prepare for preschool, too. He started preschool this past fall and his teachers told me he didn’t cry once as he made the transition.

The Harris Y has drop-in care for kids from ages six weeks to 5 years old and additional programs for kids up to age 10 when the Charlotte Mecklenburg school system is out. They also have parents’ morning out from 9 a.m. 1 p.m. for $30. For more information go to www.ymcacharlotte.org 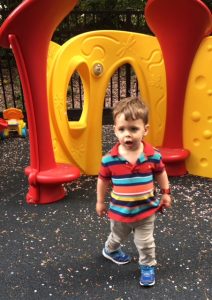 I talked to Harris YMCA Childcare Director Kristina Sosa recently about what makes their program so strong. She pointed out five ways it benefits families of young kids.

1) Drop-in care is a great way to expose young kids to the Y programming, so that when they’re older and they’re dropped off either at camp, pre-school or swim lessons, they’re used to it because the Y has the same ideals in every program we run.

2) We’re here for new moms. They can start dropping off babies at six weeks old, so they can have a break, even if it’s 20 minutes for a shower or an hour for a shower and the sauna room. We also have a group called “Baby Buddies” that meets every other Wednesday. It’s an hour and it’s free. It’s just for moms with babies, until 12 months old. They just sit and talk about what it is to be a new mom. They bring their babies, so the babies can interact with each other and as moms we know how helpful it is just to talk to other moms and get advice.

3) We have fun activities every day and it’s age-appropriate. We have a curriculum, lesson plans, and sensory activities. All the lead teachers of the classrooms do lesson plans on a monthly basis. They have arts and crafts, music, circle time, outside time and obviously snack (9:30 a.m.) and lunch time (11:30 a.m.)

5) Every employee is CPR first-aid certified and they’re annually recertified. It’s not just (in the childcare area). Maintenance goes through the same certifications we do, front desk. There’s a red button that will activate 911 immediately. Our training keeps up with the times. Recently we added the active shooter training as part of our annual certification. Unfortunately it’s a reality, but we know what to do.

‘Move it, move it!’ Madagascar – A Musical Adventure Takes the Stage

Top 5 Local Smarty Picks for where to...

Smarty Reminder: Register now for Girls on the...